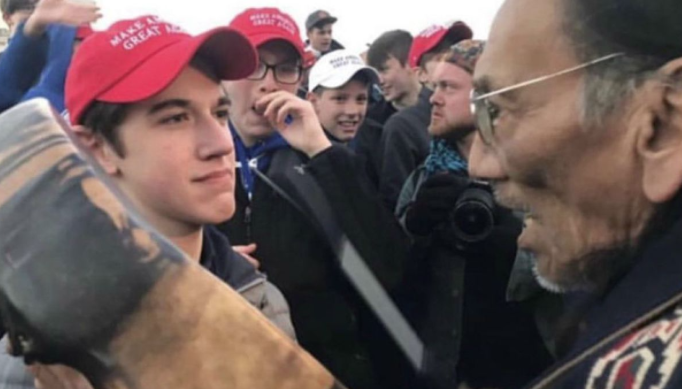 It seems these days that we go from one news “crisis” to another. If it’s not global warming (sorry, I mean climate change) then it’s Russian collusion. Or any variable of Trump’s a racist, Nazi-like dictator. Some are ripe pickings for mocking like the media’s reaction over the fast food buffet for the Clemson football players. Others are much more serious.

And that brings us to the Covington Catholic High School story. What the left has attempted to do in smearing these kids is a travesty. And despicable (even for them). These people are so invested in their hatred of Trump and his base that they will take any story and run with it,regardless of whether it’s true.

Here are just a few samples among many.

And let’s not lie, everyone that sees that smug look wants to punch that kid, right? I even saw conservative people online, when the first video, they were like ‘Look at that face, you wanna punch that face.’ Cause he does, and it’s not that–Trump or not, that he just looks like an asshole that’s how you look when you’re a teenager at that age.

Chris Evans: “This is appalling. The ignorance. The gall. The disrespect. It’s shameful. And sadly on brand. When something like this isnt even surprising, it’s evidence to our place in the cycle of recreating our darker chapters.”

Chris you have accurately described people like you on the left.

“Since they’re in DC, they should take the phucking red hats and MAGA bullsh*t and get up in some faces over Congress Heights way. The reaction won’t be so dignified. They’ll relocate that smug grin to the back of his pencil-di*k neck like he’s asking for,” Jeffrey Wright said.

The left’s tolerance and compassion on display.

Jordon Horowitz: “Hate is taught. Raise your children to be better.”

You’re full of it. Hate that is. But I love this reply to Horowitz: “Stupidity and rush to judgment are taught. Raise your children better.”

Patton Oswalt: “This is the Vietnam vet the kids from @CovCathColonels were mocking. Chanting “BUILD THAT WALL” to a Native American. This clip is VERY hard to watch, fair warning.”

I thought Vietnam veterans were baby killers according to the left? Frankly I have a hard time keeping up with their hypocrisies. Of course today we discovered he wasn’t a Vietnam vet at all.

Over on The View they were pretty upset (imagine that!):

“They should have been taught, what would Jesus do? That’s what Catholics are taught. They were engaging the people being aggressive to them. A chaperone should have said to them, ‘Don’t engage, don’t engage, move along.’ Instead, the chaperones told them to start this chant. And the kids started this chant.”

That is not true. And you know why? Because just seconds later she said this: “And again you have a 16-year-old, he was smirking. He says he was silently praying. I don’t know when I pray, I don’t smirk.”

So she criticized the kids for engaging and then mocked the kid who just stood there not engaging and praying. I truly wonder if these people realize how totally foolish they look. Btw isn’t it fascinating how those who mock Christianity suddenly become experts on it when they think it suits their purposes?

And apparently she couldn’t handle the MAGA hat:

And that is the other thing you know Catholic churches, you get this tax exemption because you’re not supposed to be political. They had these political hats on and these outfits. Again where were the adults advising them that they can’t wear that?

Gee isn’t it funny she doesn’t have the same animus for Jeremiah Wright? Earth to Sunny, most churches have the American flag in them. Horrors!

Those are the sentiments of US watching YOU.

There are very few mental adults left in the mainstream media. And another good example of that is Kirsten Powers. There was a time several years ago when I thought she just might be an independent liberal thinker. Boy was I wrong. And I am sorry I read her book. That’s time wasted that I’ll never get back. Here is her “brilliant” take on all this:

Also at 1:18 the harassers yell “Y’all got one n***** in the crowd!” One of the boys turns around and holds up two fingers…another holds up one finger apparently referring to the one black boy in the group.

How is this “shockingly little evidence of wrongdoing.

Well there is “little evidence” of something and that would be the intellect of Kirsten Powers. So the harassers use the N word, the kids point out that they have a black person or 2 in their group and THIS is what she perceives as a slur and is upset about. Not the people who used the term in the first place. Delusional.

So why did the media automatically run with this. Actually there are a lot of reasons. But I think one of them was because they had to divert attention away from the fact that it was a peaceful pro-life rally. Abortion is the highest sacrament in the higher levels of liberal “religion”. Anyone who opposes abortion on demand must be destroyed (politically, at least so far). And of course it plays right into the template of conservatives as bigoted hicks from the hills.

The left are never held to account for their rhetoric. I’ve said before, and I hope I’m wrong, but the media’s constant pushing of fake news like this is going to get someone hurt or killed. The Covington school even today had to close due to death threats.

And then you had Jack Morrissey tweeting this: “MAGA kids go screaming, hat first, into the wood chipper”.

Most on the left have lost the ability to reason. You would think after having been totally embarrassed twice in a 36 hour period they would learn. But they won’t because they are incapable of it. To learn and grow would mean they have to re-evaluate their view of the world. And that ain’t happening. How many times in the last decade has their narrative been destroyed by facts and reality. Yet they keep on going.

Ace of Spades nailed it:

My heart goes out to these kids and their families who, to me, epitomize everything that is good and right about the America that I grew up in or at least that I had imagined it tried to be. And that stands in absolute stark contrast to those on the other side. They’re either sick or evil or some combination of the two. As for the former, I also admire their courage in standing up to a machine that has demonstrated time and again in recent years that it has no compunction in saying things that can ruin people’s lives or even result in physical harm. I don’t want to take anything away from their courage and moral fiber but I think it’s not an overstatement to give credit to the presence of President Trump. Whenever he is attacked, it is we who are really being attacked. He has taken the most insane and vile assaults against him and his family and, unlike other putative “leaders” on our side, has rammed it back down their throats.

Finally, here is what one of the father’s of the boy said:

How do people think like this?” and whatever, is I have a strong belief — and this is one of the reasons I love Covington Catholic, the high school. Those who do not have faith lose their ability to reason. So that’s the best way I can sum that up.

Daniel Greenfield: How the Border Crisis Caused a Crisis 2,500 Miles Away in Maine