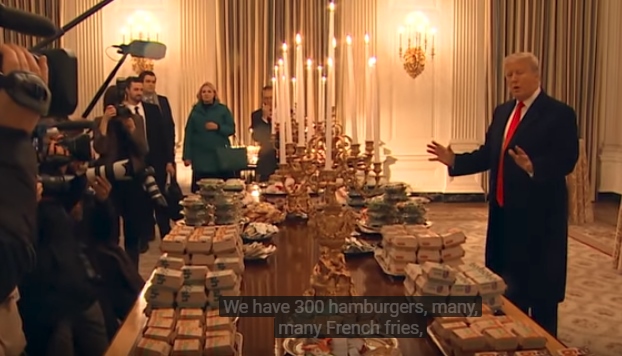 This man is unfit for office!! Impeach!

Every day I wonder how the left could possibly get an more nutty or deranged. Then I see the reaction to Trump’s hosting the National Champion Clemson Tigers and shake my head in bewilderment (kind of like the facial expression a dog has when he’s confused by someone’s actions).

We’ll start with the hyperventilating over at Vox:

But though this provides a clear, if a bit insignificant, portrait of the ease at which Trump is capable of lying, others have accused Trump of disrespecting the athletes by serving them cheap fast food. Some have also argued that the right thing to do would have been to bring in his kitchen staff at the Trump International Hotel, which is just three blocks from the White House.

Yes but if he had done that it wouldn’t have been as much fun seeing how this triggered the left.

Trump’s comments, particularly when he speculated to reporters prior to the event that “I would think that’s their favorite food,” referring to chains like McDonald’s and Wendy’s, rang as classist or racist. It’s not much of a leap to assume that Trump guessed that many Clemson Tigers are black or come from working-class backgrounds, and thus presumed they prefer cheap, fatty foods over anything the White House would typically serve for guests in the State Dining Room.

Since they finished off all the food I would say Trump had them pegged pretty well!

To suggest that there’s something wrong with eating fast food at all is its own ethical conundrum — on the one hand, as Vox’s David Roberts notes, America’s largest fast-food corporations are predicated on “a vast network of animal suffering and ecological destruction and has in turn produced an epidemic of ill health.”

Here’s a question for the idiots at Vox. How about HUMAN suffering. Like in abortion? Oh that’s right. You don’t care about a child suffering in the womb.

So I had a choice. Do we have no food for you, ’cause we have a shutdown, or do we give you some little quick salad that the first lady will make along with… along with the second lady? They’ll make some salads — and I said, “You guys aren’t into salads.”

Did you catch it??? It was a sexist comment! Erin Burnett over at CNN had a meltdown:

ERIN BURNETT: How in the world do you not perceive that as sexist —

ERIN BURNETT: — to say the assumption that his wife’s gonna go make salads for the bunch of football players? (snickering)

SCOTT JENNINGS: I think you — you might be overreading this one.

ERIN BURNETT: I’m not overreading it! He made a joke that was sexist about women. (stammering) I guess what we’re agreeing with is whether it’s funny and whether humor is something that’s serious. I feel pretty strongly it’s a sexist thing to say.

What must your life be like when you see sexism in that comment? And btw, humor is NOT serious. More proof that liberals don’t have a sense of humor and don’t understand the entire concept.

I’ll have to admit the leftist robots have everything covered in this story:

However, it wasn’t always this way. Guess what they said about Obama liking burgers? Of course we all know. There was NO criticism of Obama causing animal suffering or ecological disaster. In fact, the headline at the Washington Post was “President Obama and cheeseburgers: A love story”. (“Where do I begin, to the tell the story of how great a love can be…”)

Despite the White House’s emphasis on healthy eating and Obama’s assertion that his favorite food is broccoli (I mean, really), Obama has a habit of taking people out for burgers and fries. Often that person is Biden. Just two guys grabbing some burgers, right? Obama suggested that he might have a burger for his 50th birthday in 2011. A blogger apparently nicknamed named him “President Obeef” because of his well-documented penchant for cheeseburgers. Michelle Obama also sometimes ditches the healthy eating and, like the rest of us, splurges on fast food.

But that’s not all. Getting back to Trump, Philip Bump at the Washington Post took a different angle, giving us a mental picture of how the food was arranged (he even had a chart!! Look at what he can do!) :

After considering far more wire photos and social media posts than you might expect, we’re pleased to report that the arrangement in the room looked like this. (Not shown: The candelabra.) There were sandwiches and pizzas from McDonald’s, Burger King, Wendy’s and Domino’s.

I am glad to know this. I will sleep better tonight. Although not including the candelabra sure is a major faux pas. You know what should be shut down? The media! Actually their collective Borg brain already is.

Next he attempts to calculate how much this costs. Now this is hilarious!

The grand total? According to our count, Trump spent about $2,911.44 on feeding the team. A sixth of that is the fries alone, though, so take with a grain of salt. (The fries; also the estimate.) Half the cost was incurred at McDonald’s alone.

Some people have noted that the McDonald’s sandwiches and nuggets would be on the 2-for-$5 menu. If so, the total drops to $2,437.11. It also explains why there are so many more McDonald’s products than Burger King.

This total includes 319 sandwiches, 177 of which were hamburgers. Perhaps Trump’s “300” hamburgers figure referred to all of the sandwiches — or perhaps they weren’t all put out at the outset. (The low number of Whoppers and pizzas certainly does suggest that some food may have been held in reserve.) That the staff who were passing around Wendy’s on serving trays took those sandwiches directly from the table, however, seems to suggest that what you see in the photos was what was purchased.

Hallelujah! This report reminds me of something Les Nessman would do!

Oh, and so you won’t be left wondering about the fries, ace reporter Phillip Bump had that covered too!

The White House had a unique system for distributing the french fries. The fries, which appeared to be from McDonald’s, given the accompanying ketchup packets, were transferred into White House-branded cups, making it hard to determine how many there were at the outset. (In his taped remarks, above, Trump only revealed that there were “many, many fries.”) We figured an estimate of 200 large fries was about right.

He also fact checked Trump’s statement that he had bought thousands of burgers and that they were stacked miles high (no I am not kidding):

FACT CHECK: At two inches each, a thousand burgers would not reach one mile high.

Had Trump instead invested his entire net worth — $3.1 billion per Forbes last year — on $5 sandwiches, each two inches high? A stack of hamburgers nearly 20,000 miles high.

It would require quite a large silver serving platter.

Did this “journalist” actually get paid a salary to write a piece like this? Good grief!

It makes me wonder if today’s press had been around when Jesus miraculously fed the 5,000 what their reaction would have been? Why fish and bread? How racist of Jesus to think these people all wanted fish! Did everyone get feed? Fish had to die to feed these people! How much did it cost? How were the fish arranged in the baskets? How do we know it was 5,000? And on it would go.

It’s fascinating that these people who hate Trump spend most of their waking moments obsessed with him! They are not well.

James Riley on Huckabee: Teaching the LA School District a BIG LESSON on the 1st Amendment!

Stuart Kaufman: The Trouble of Tenure