“Idiot wind blowing every time you move your teeth

It’s a wonder you still know how to breathe” Idiot Wind, Bob Dylan 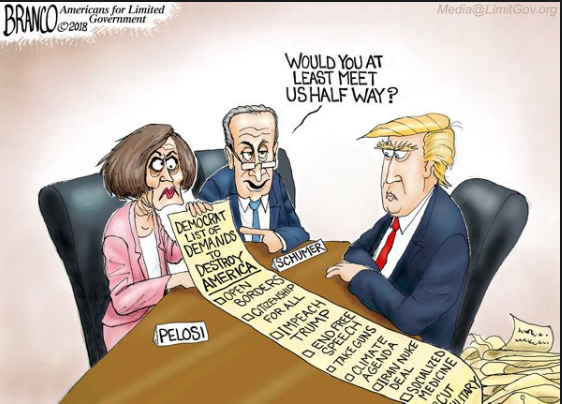 The insipid stupidity and constitutional malpractice of many members of Congress has to end. Time to do more than pay attention folks.

To paraphrase the Blues Singer Howlin’ Wolf, it is time to howl at them. Time for those with real hearts and minds to march on Washington in protest of the maladministration that is our current Congress.

During this shutdown Congress should not be paid.

I am outraged by the immature, hypocritical, disrespectful and dismissive behavior of House Speaker Nancy Pelosi and Senator Chuck Schumer demonstrate in regards to the safety of the American people and to our President.

Pelosi and Schumer are non-essential government employees. We are their employers. We need to constantly remind them that they work for us.

It was broadly appropriate that in the January 9th meeting in the Situation Room, with Pelosi and Schumer, President Trump brought candy. It speaks volumes about the actual maturity level of the Speaker and the Senator and the sense of humor of our President. However, unlike actual children, Pelosi and Schumer were not appeased. They metaphorically bit their lips and ground their feet into the carpet.

As an American citizen, I would have liked to have seen that January 9th meeting televised. So that all Americans could see how Senator Schumer raised his voice to our President or how Pelosi acted in a contentious and obstructionist manner.

I have found it quite ironic that in the recent discussions about the construction of a Southern border wall many of the same dissenting members of Congress forgot their support of The Secure Fence Act of 2006.

The Secure Fence Act of 2006 (Pub. Law 109-367) was signed into law by President George W. Bush on October 26, 2006. It authorized for 700 miles of additional border security to be erected for our Southern border. It allocated a budget of 50 billion to be spent over a period of 25 years. Some of the people that voted for these law were then Senators Obama, Clinton, Biden and that vastly sullen Senator Chuck Schumer, among others. To no one’s surprise, House Speaker Nancy voted against the Secure Fence Act. At least there is a consistency to her insanity. Where is the money that was allocated in 2006? I know much of it floated into the Presidential coffers of Barack Obama. Again I ask, where is the money?

In actuality, after reading this law, it’s tenets and amendments, President Bush should never have signed this into law. It was an ill defined and a weak knee attempt at security for our Southern border. Trump’s proposed border security ideas are broader based and far more believable as security measures.

Ultimately, the reason that the Democrat Party is so partial to open borders is quite simple: Open borders equal easy votes. Which is also why the liberal factions of both political parties have fought so fervently against voter ID laws.

As a citizen of this great country, I find myself angered and frustrated by some of the language used by the Speaker of the House, Nancy Pelosi. The death of Police Officer Ronil Singh, at the hands of a deported, illegal alien is not a “manufactured crisis,” Nancy.

The lack of perception from this career politician is almost not worth noting as she has not done anything to aid in the safety and security of the American people. Those Botox treatments not only froze her face, they also froze her soul, if she ever had one. I know that there is no active brain activity in her statements.

To prove my point, Speaker Pelosi recently had the unmitigated gall to state dismissively that the deaths of citizens such as Officer Singh don’t necessarily amount to a “crisis.” I think the murder of a person who immigrated legally to this country, like Officer Singh from Fiji, by the hands of an illegal alien, who was also a gang member, firmly constitutes a crisis. Ever have a family member murdered, Nancy? Believe me, it is not a manufactured crisis. The sorrow is quite real and most tangible.

But I imagine there is an added sorrow when one loses a loved one to someone who has been deported from this country several times, as Officer Singh’s murderer was, who is also a gang member and a criminal. A criminal who was protected by Sanctuary cities such as your beloved San Francisco, Nancy. Time to realize Speaker Pelosi that America has a broader range of humanity than your narrow liberal base.

So back and forth we go with a Speaker of the House, whose public statements reveal an intellectual dexterity similar to that of a small round soap dish, and a President who is attempting to keep a campaign promise in the face of patently ridiculous adversity.

I did find myself responding with delight with the recent cancellation, by President Trump, of Speaker Pelosi’s “good will” tour. A good will tour, as paid for by the American taxpayer, that was to encompass a tour of Brussels and Afghanistan. This was done in the aftermath of the Speaker’s misplaced and irresponsible statements about the President’s security at the upcoming State of the Union speech being compromised by the shutdown.

What was Pelosi thinking by going on what amounted to a pleasure trip in the midst of a government shutdown? Basically, what we had was a group totaling 93. Seven politicians and a security detail and entourage totaling 86 more. Get to work Nancy. Demonstrate something resembling leadership instead of the petulant course of your current behavior. Nancy forgets her position on the totem pole, third in the position of power.

In my recent Politichick article, “A Shut Down? To Certain Members of Congress and the Media: Please Shut Up,” I was giving Pelosi and Senator Schumer equal credit in perpetuating this ridiculous shutdown.

Well, I was wrong.

Speaker Pelosi is trying to return to the perks attached to her previous tenure as Speaker of the House and the American people need to raise their voices in protest.

Why does a sitting House Speaker have to use Air Force planes for her and her entourage’s transport when the cost of such travel averages over $200,000 dollars per trip? What justifies Nancy Pelosi spending the tax payers dollars on obscene amounts of booze and food? What negotiations require this amount of elitist food and liquor–especially during a government shutdown that she helped orchestrate?

When is Speaker Pelosi going to do something professional like doing her job? She behaves like the Queen of a constantly evolving, mad royal court.

The safety and security of the American people should be the most important responsibility exercised by the United States Congress. Yet, what we have is public declarations by Congressional Representatives and Senators that demonstrate what poor performers they truly are. As Shakespeare stated in Macbeth;

“Life’s but a walking shadow, a poor player

That struts and frets his hour upon the stage

And then is heard no more: it is a tale

Told by an idiot, full of sound and fury,

The Circus of the Absurd that is our current Congress should not be tolerated by any thinking American. The vast majority of the members of Congress truly do not signify anything meaningful at all. Many new members of Congress, such as Alexandria Ocasio-Cortez and Rashida Tlaib, are very good at a form of self promotion that promotes the illusion of intelligence. But they, like Speaker Pelosi, are empty suits preaching treason, sedition and insurrection.

Speaker Pelosi probably looks at Ocasio-Cortez and Tlaib and sees a younger, mirror image of her own skewed principles. Perhaps she has a bit of pride for her leftist progeny. Ocasio-Cortez and Tlaib were both indoctrinated by a vastly liberal education system. In actuality, intelligence without compassion or humanity is merely clever viciousness.

Ladies and Gentlemen of Congress, if you are not going to do your job, please resign. If you are preaching an agenda of hate and discontent, then we as America’s citizens need to ask for a constitutional process to remove these empty suits from our sight and far from the range of our ever having to hear again their vicious, whiny voices.

Sacrificial Lambs: New York has Blood on its Hands

Barry Shaw: The Bush-Sharon Letters, and Why Peace is Not Possible With the Palestinians