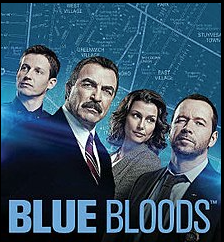 There would seem today that we have more trashy television than ever before. This comes from one whose teen years were during the golden age of TV when a family could sit around that box in the living room and have their home transformed into a theater. This Writer admits that, with the exception of a good book, TV remains a major source of entertainment and who misses good clean comedy shows, dramas that are family friendly, well plotted mysteries, exciting Westerns and science fiction.

It would seem that from the day of having only two or three channels to now having access to a hundred or more there would be no end to wholesome entertainment. Not all on TV deserves criticism of course, but when you have a police show in which there is an emphasis on family, faith and prayer it seems like a miracle. Surprisingly that is a show on CBS, one that has survived for nine years now and seems destined for more. Blue Bloods.

The series follows the Reagan family of police officers with the New York City Police Department (NYPD). Francis Xavier “Frank” Reagan is the Police Commissioner. Frank’s oldest son Danny is an NYPD detective, his youngest son Jamie is an NYPD police officer (later sergeant), and his daughter Erin is an assistant district attorney. Frank’s father Henry is a former NYPD beat cop who rose through the ranks to Police Commissioner. There was also an older son Joe, a policceman killed in the line of duty before the series began, whose life has a lasting effect on the family. Each member of the family represents a different aspect of police work or the legal process. While each person’s story might occasionally interweave with another’s, the show also follows the professional and, at times, personal relationships with their respective partners and colleagues.

Frank (Tom Selleck) and his retired father Henry (Len Cariou) are the family mainstays and both are widowers. Danny (Donnie Wahlberg) and Detective Maria Baez (Marisa Ramierz) provide much of the action and times have almost dominated the show. Danny has an explosive personality that would prefer the old days when cops did not have to be so politically correct. Danny is a widower with two sons, he was married to Linda (Amy Carlson), a nurse who was killed offscreen between seasons 7 and 8.

Jamie (Will Estes) and his former partner Officer Edit “Eddie” Janko (Venessa Ray) have the most interesting relationship beginning season four. Episode after episode dropped hints that these two were made for each other. They became engaged in the last episode last year and this year is likely to have an episode centered on their marriage. Erin (Bridget Moynahan) as an ADA brings a different perspective about law compared to other members of the family and this leads to some very interesting and at times critical conflicts. Erin is divorced and has one college student daughter who lives with her.There are a number of characters connected with family members that a whole separate review could be written about. 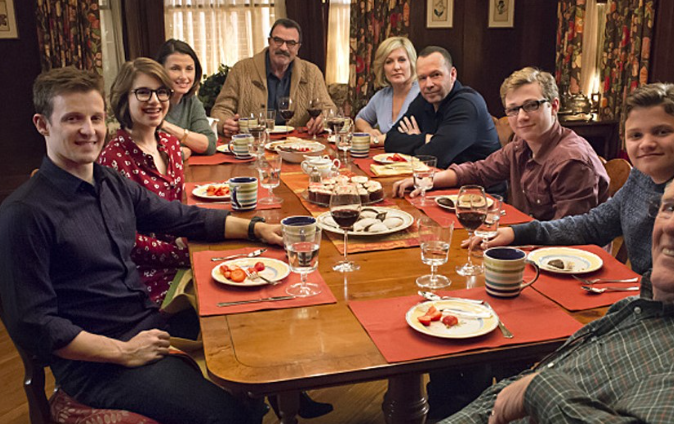 In each episode there are usually three or four different stories that sometimes will connect. However, make no mistake about it, no matter the situation or disagreement this is about family. Frank and to a certain extent Henry, are the patriarchs the others look to for advice and encouragement. Tom Selleck’s role as Frank is the central figure in that every Sunday he presides over a family dinner that all family members get to after they have attended church. The Sunday dinners are a high point when free discussion reigns and problems are shared. One is reminded of the charm we enjoyed on The Waltonsduring family dinners. Church dedication is very evident in every story as is prayer. This indeed is rare in television today.

The major issues of the day are dealt with including communities united against the efforts of the police to keep the city safe, gang violence and the threat of terrorism. Members of the family often find themselves dealing with situations involving clashes between ethnic, racial and fanatical religious zealots. It is fascinating to see the show deal with issues that its network like other mainstream networks tend to ignore in their news departments. You especially have to love the clashes Frank Reagan has with mayors and the governor who resemble what we have in New York today.

It is also notable that the family name is Reagan, as Danny has to tell people “It’s Reagan like President Reagan.” Honor is important in this show and there are important moral issues in almost every episode. It must be stressed that what especially holds the family together, and the show as well, is love. This reviewer prays that this love will keep the show going for another decade. If you are just now catching the show, there are plenty of episodes being run in syndication on various channels for you to enjoy. DVDs are also available on Amazon.

Barry Shaw: The Bush-Sharon Letters, and Why Peace is Not Possible With the Palestinians

Barry Shaw: What's With the Irish (Regarding Israel)?