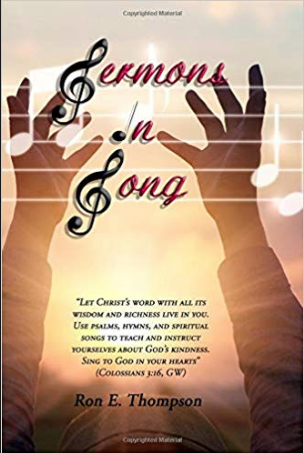 Life is about choices and today we are led to think that is largely about whether to accept socialism or capitalism as a lifestyle when we see so much on TV about the growing divisions in our nation. However the greatest division here and around the world is as old as the choice by Adam and Eve in relation to serving God. That is the biggest choice that exists today, whether to serve God or the world.

This review for Sermons in Song involves a young man who had to decide between two passions in life. This book, through the author’s messages, witnesses how a person can use a talent for God receiving more pleasure than using that talent solely for the world. I have never reviewed a book on theology in which I found myself singing as I covered each chapter. That is because Ron Thompson has written a book that is based on something more than past sermons over his successful sixty years as a pastor. A musical prodigy as a child he had to decide between a career as a musician, which critics predicted would be a resounding success, or answer a call from God to be a pastor.

I had the pleasure of knowing Ron in college as both a roommate and dear friend. Ron was in college to study religion as he felt he had a calling to preach. However, popular music had all the trappings that could lure a young man to a career as an entertainer. Before college he had had twelve years of piano and in college he played piano for a successful local rock ‘n roll band, The Rhythm Rockets, to help pay his tradition. He even wrote the music for lyrics that were performed on stage As the lyric writer I saw this side of his talents.

Apparently it was God’s plan for him to combine both for in his messages he found himself drawn to the great hymns of the past, many of which are still heard in churches today. In each message in this book there are the lyrics of hymns that relate to the selections covered in the Bible.

The emphasis on music and Christianity is very prominent. In the Old Testament we read of singing by the people of Israel and by various religious leaders. And of course there are accounts of angels singing. This is carried through in the New Testament where we have records of gatherings of Christians singing as part of their worship and there were times this would continue when imprisoned for their faith. There were times when those running the prisons for Rome were dawn to become Christians,

It must be mentioned that this writer found immediately a disadvantage in reviewing this book too quickly as usually when you review a book it is at a time when you need to read it directly from cover to cover and nothing else. This you cannot do easily with Sermons in Song because it is the type of book one would find excellent as a Bible Study covering one a day.

It would also be a good idea to have a Bible next to you as you follow the references. At the start of each chapter is a suggested reading from the Bible and many references in each message that the reader should refer to directly. In doing this the reader then sees clearly how the writers of world famous hymns were inspired by various passages. In the Old Testament the most famous book for this may be Psalms as many of them were written to be used in worship as songs.

There are so many topics that it is hard for this writer to select a favorite, however readers may be assured that they will relate to most if not all.

What also comes to mind is the attack upon the ministry  by Satanic forces today. These attacks upon pastors and priests come from progressive liberals in the Democratic Party as well as the mainstream news media. And sadly many very liberal churches. It is not just the temptations that Pastor Thompson faced to forget his calling in favor of a more glamorous life style. It ls an attack on every conservative and evangelical minister who takes the Bible literally in its definition of what is sinful and what is not.

We often hear the call for us to be patriotic in regard to supporting conservative Christian lawmakers. However, we should be just as aware of our need to support, rally behind and stand up for our pastors and priests who are grounded in solid Biblical teaching.

I had no intent to turn a book review into a political rant. This writing was inspired by a concern that today more than ever young people wanting to serve our Lord and Savior Jesus Christ are under attack.

Barry Shaw: Why the UNWRA Is a Racist Org