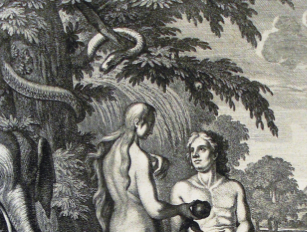 Stewardship of creation is good; however, stewardship doesn’t change how 21st century mankind got to the point where environmental stewarded is vital. When the earth was created, it was “Good.” Genesis chapters 1-3 provides one explanation how we got from a perfect creation to where we are now.

Here’s the story: God told Adam that he was free to eat from every plant in the Garden of Eden with the exception of one tree, the Tree of the Knowledge of Good and Evil.

Have you noticed that when we are told we can’t do something, we always seem to want to do it? We think what we can’t have is better than what we have. That’s what happened to Adam and Eve. I imagine they first eyed the Tree of Knowledge of Good and Evil. They noticed that the Tree’s fruit looked good and appeared tasty for food.

Adam and Eve were together when Eve picked fruit from the Tree of Knowledge of Good and Evil. Eve offered Adam a fruit. He ate it. Earlier they may have had a conversation that went something like this: “Why can’t we  eat it? God’s just being mean! After all, the tree is here in the middle of the Garden. Why should we walk over to the other side of the garden to get a luscious fruit similar to this one?” Whatever their thoughts or conversations, the result was that Adam and Eve ate fruit from the Tree of the Knowledge of Good and Evil. They disobeyed God.

Oops, disobedience has consequences! What happened as a result of their disobeying God’s command, answered, “Why shouldn’t we?” First, they were ashamed of their naked bodies. They made fig leaf clothes to cover themselves.  Second, they were afraid of God; they hid from him. Third, Adam compounded his disobedience by lying to God. Adam told God, “I heard you in the garden, and I was afraid because I was naked—so I hid” (Genesis 3.10 NIV). In reality, Adam wasn’t naked; he had fig-leaf coverings. In Judeo-Christian circles, Adam and Eve’s disobedience is known as the “Fall of Mankind.”

God is just. Adam and Eve were punished for disobedience. The impact of their disobedience affected all creation. God cursed the soil/ground. No longer did the soil produce only good or beneficial plants. Some plants were not-good, even harmful.  This is what God said: “Cursed is the ground because of you; through painful toil you will eat food from it all the days of your life. It will produce thorns and thistles for you” (Genesis 3.17-18 NIV).

I imagine Adam looking at Eve and saying, “Huh, what are thorns and thistles? This doesn’t sound all that bad.” What God said next gave Adam more concern, “ By the sweat of your brow you will eat your own food until you return to the ground, since from it you were taken; for dust you are and to dust you will return” (Genesis 3.9 NIV). Then, God told Adam and Eve they must leave the lush Garden of Eden.

When Adam and Eve sinned, the created universe became subject to death. Since then,  creation has groaned as if under the pains of labor (ouch!).  The Greek word for groan was mâshash, which implies a sense of groping, feeling, searching. Both man and creation reach out, groping for the new heaven and earth where creation will be free of its death sentence.

Prager University: How the Reformation Shaped the World