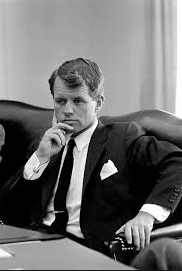 Following in the footsteps of notable luminaries like Bill and Hillary Clinton, Robert DeNiro, George Clooney and Taylor Swift, the Robert F. Kennedy Ripple of Hope Award was bestowed on Barack Obama.

That’s not to be confused with the Robert F. Kennedy Human Rights awards which were already given out this year to the teen gun control front group, March for Our Lives and to advocates for illegal aliens.

The award, an ugly misshapen bust of RFK which looks to be permanently grimacing in pain (and who can blame him), goes for under $5,000 on the open market. One of the tchotchkes owned by the Kennedy family was sold for $3,336, which can be cheaper than actually going to the ceremony.

And probably more respectful to RFK whose grave at Arlington ripples at every ‘Ripple of Hope’.

Like France’s Legion of Honour, it’s hard to find anyone who’s anyone who doesn’t have one. (If they haven’t sold them yet to pay for a trip to the Bahamas.) Al Gore and Joe Biden have them on a shelf somewhere. If you visit the Kennedy clan, you’re bound to get one as a going away present.

Giving out awards named after RFK at the Hilton Midtown in New York is one of the few things that the foundation named after him seems to do. Its leadership has undergone a grueling grind of three award ceremonies just this year. But the RFK awards in their glorious meaninglessness help bored New York celebs and CEOs answer the question of what to do when they haven’t picked up an award in a year.

Obama had given away plenty of the ugly little things, so it was his turn to actually get one of his own. His first time at the RFKs had been to hand out the award to ACORN activist Stephen Bradberry, who had insisted that New Orleans was suffering from “a concerted plan to make this a whiter city.”

That was 2005 and both Barry and Bradberry were auditioning for bigger things. Barry made it, Bradberry didn’t. These days his bio lists a few accomplishments. One of them is the claim that, “Bradberry is the only American individual to receive the Robert F. Kennedy Human Rights Award.”

It depends on how you define American.

In 2009, Obama was handing out the little statues of RFK at the White House. If he had any real concern for human rights, he would have done the decent thing and let Robert F. Kennedy rest in peace.

Instead, he showed up grinning and tilting his head for the cameras at the New York Midtown Hilton.

In his acceptance speech, he often spoke of hope. But it’s hard to look at a map of the country or the world and find one place on it that feels more hopeful after his years in office. Are Americans more hopeful than they were in 2008? Are people in the Middle East, Asia, Africa, or South America more hopeful? Where can you find Obama and ‘hope’ together except at the RFK Ripple of Hope awards?

Obama urged attendees at the gala to reject cynicism and embrace hope. Then he sat back down next to New Jersey Governor Phil Murphy, a Goldman Sachs executive and top Den donor who bought an ambassadorship from Obama and then bought a gubernatorial election, and is now enmeshed in a scandal involving a sexual assault by a staffer that the perpetually smirking politician chose to ignore.

But mere sexual assaults can no more slow down the Robert F. Kennedy Ripple of Hope awards than it ever slowed down the real life Kennedys.

Three health care CEOs have received the Ripple of Hope award. As did Bono, Wyclef Jean, George Clooney, Tony Bennett, Robert DeNiro, and Taylor Swift, for dating a member of the Kennedy family. If dating a Kennedy (and surviving) isn’t a true commitment to human rights, I don’t know what is.

Alec Baldwin was there as the emcee for the second year in a row despite recently being arrested and charged with assault after punching a man during a fight over a parking spot. Baldwin’s history of altercations may have prevented him from receiving a Ripple of Hope Award, but it didn’t prevent him from emceeing another of them. Nothing short of murder in broad daylight would have done it.

(Drowning a woman in a car at night or murdering a teenage girl in her backyard also doesn’t count according to the Kennedy code of ethics.)

Also speaking was Tom Brokaw, who recently had his own #MeToo moment.

Sadly, there was no mention of one of the RFK award’s first recipients, Winnie Mandela, who had recently passed away and gone to whatever place the murderers of teenage boys are summoned.

Four years after winning the prestigious human rights award, Winnie Mandela and her thugs murdered Stompie Moeketsi Seipei, a 14-year-old boy, in a failed effort to get him to make a false accusation of molestation against a white Methodist minister active in the fight against Apartheid.

“I slaughtered him like a goat,” one of her thugs testified.

Stompie had been beaten for days, including by Winnie Mandela who used her fists and a whip.

“She was singing when she started the assault on us,” another of the RFK Human Rights award winner’s victims described.

Yet another victim described Winnie Mandela dancing to the rhythm of the blows.

Another of Mandela’s thugs stated that, “Madikizela-Mandela told me to sing loudly to drown the voices of those being brutally assaulted.”

The Robert F. Kennedy award ceremonies are an embarrassment to RFK, who, for all his flaws, didn’t deserve this. No one does. Some leaders hope to have bridges and rivers named after them. Nobody really wants to have the CEO of a health care company and a bunch of trashy cable channels explain how connected to you they feel in their work of killing the elderly and making millennials even dumber.

It’s hard to say whether RFK would have seen his legacy more in Battlebots, Naked and Afraid or Deadliest Catch. Or whether he would come back to haunt the Ripple of Hope awards if he could.

But you can’t deny that when it isn’t handing out worthless awards that make RFK roll over in his grave, that the Robert F. Kennedy Human Rights foundation occasionally makes a difference in people’s lives.

Just last October, RFK Human Rights bailed out Tamika West, a career criminal in New York with 27 arrests for burglary, prostitution and drugs, to prove that bail is unfair to “people living in poverty.”

That was according to Kerry Kennedy, who can’t stop handing out awards to random Democrats.

This December, Tamika was busted for stealing toys for needy kids, after lighting a crack pipe, and going on her merry way.

Look for her to be next year’s Robert F. Kennedy Ripple of Hope honoree.

Book Review: The Good Neighbor – The Life and Work of Fred Rogers