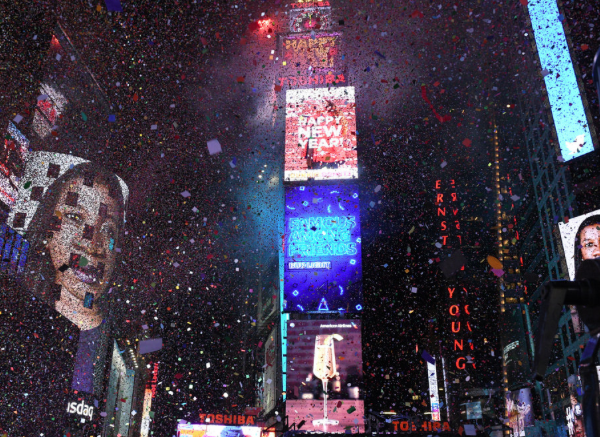 The most miserable place in the world to be on New Year’s Eve is in Times Square where tourists who don’t know better are trapped in crowd control cattle pens with no bathrooms. Even if it doesn’t rain, no amount of corporate swag can compensate for having to stamp your frozen feet in puddles of urine with nothing to eat or drink for hours, in the faint hopes of actually seeing the big ball drop.

In addition to all the other miseries are the terror threats. With two million people expected to pack into a handful of blocks, New Year’s Eve in Times Square is on every Islamic terrorist’s Christmas wish list.

ISIS has made repeated threats to hit Times Square. And the NYPD is deploying countless cameras, drones, counter-sniper teams and bomb sniffing dogs. There are garbage trucks full of sand to stop car attacks like the one that killed 8 people near Ground Zero, when Sayfullo Habibullaevic Saipov, a Muslim Uzbek immigrant, ran down tourists, and slammed into a school bus, shouting, “Allahu Akbar”.

After Akayed Ullah, a Muslim immigrant from Bangladesh, tried to blow himself up in the Times Square subway in December of last year, New York City cops are being trained to handle suicide bombers. Anyone trying to get inside the Times Square cattle pens gets screened at two separate points, sniffed by ‘Vapor Wake’ dogs, and forced to pass through a gauntlet of portable metal and radiation detectors.

The more than 5,000 police officers will be checking bags (no bombs, guns or alcohol are allowed), evacuating 125 local garages, patrolling the hallways of area hotels and screening their guests. These elaborate security measures make an already miserable event more miserable.

But they are necessary because of the history of Islamic terror in Times Square.

Two other Muslim brothers, Tamerlan and Dzhokhar Tsarnaev, the Chechen refugee immigrants who carried out the Boston Marathon bombing, had wanted to detonate six bombs in Times Square.

In 2016, Mohamed Rafik Naji, a Yemeni Muslim immigrant who, like the Ground Zero car attacker worked as an Uber driver, talked about running over people in Times Square with a truck. This year, Abdulrahman El Bahnasawy, the Muslim son of Egyptian immigrants to Canada, was sentenced to 40 years in prison for terror plots that included the potential bombing of Times Square.

But why bother with the wands and secondary screenings, the vapor dogs, drones and helicopters? On this New Year’s Eve, Islamic terrorism is the guest of honor at the Times Square ball drop.

Jamal Khashoggi, the media’s favorite Jihadist, is being honored as his Washington Post editor, Karen Attiah, will be one of the guests of honor looking down on the masses freezing in cattle pens below.

Khashoggi had gotten his start glamorizing Osama bin Laden in Afghanistan at the behest of a man named by the Treasury Department as one of “the world’s foremost terrorist financiers”. Osama and Jamal had been old friends and fellow members of the Muslim Brotherhood international Jihad network. When Osama bin Laden was getting Al Qaeda off the ground, he had called Khashoggi with the scoop.

Afterward, Khashoggi had gone to work for Prince Turki bin Faisal, allegedly linked to Al Qaeda by the twentieth hijacker. There, he tried to spin 9/11 by blaming it on American foreign policy and Israel.

Americans “want total cooperation in their fight against terror according to their own definition of what terrorism is and exactly who the terrorists are. But Saudi Arabia will not give in to such demands,” he had declared.

After the Saudis decided to get out of the Islamic terror business, Khashoggi turned to the biggest remaining Sunni state sponsor of terror, Qatar. While the media clamors that he was a “journalist”, even his backers were recently forced to admit that his columns were actually lobbying by Qatar.

“Text messages between Khashoggi and an executive at Qatar Foundation International show that the executive, Maggie Mitchell Salem, at times shaped the columns he submitted to The Washington Post, proposing topics, drafting material and prodding him to take a harder line against the Saudi government,” the Washington Post conceded.

The Qatar Foundation was set up by the terror state’s former Emir and is chaired by his consort. The Foundation had sponsored events involving Islamic clerics, including Omar Abdelkafi, who had described the Islamic massacre of Charlie Hebdo journalists in France as “the sequel to the comedy film of 9/11”.

The Washington Post, the Times Square Alliance and New York City are treating an Osama bin Laden friend and terror state lobbyist as a journalist, while the Qatar Foundation that ran him sponsored an Islamic figure who mocked the actual murder of journalists by Islamic terrorists.

The Qatar Foundation had also allegedly hosted Saleh al-Moghamsy, who had praised Osama bin Laden, Abdulaziz al-Fawzan, who had urged “positive hatred” of Christians, and Salman al-Audah, who had accused Jews of baking matzos for Passover with “human blood”, claiming that they believe “that this brings them close to their false god.”

This is the toxic torrent of Jihadist anti-Semitic, anti-Christian filth being celebrated with the ball drop in Times Square on New Year’s Eve.

When Salman al-Audah was facing the death penalty as part of Saudi Arabia’s new reform initiatives, Qatar’s Al Jazeera informational propaganda network came to his defense, calling the vile bigot a “reformer” and “prominent scholar” who has fallen victim to a crackdown on “dissent” against the Muslim Brotherhood.

The Saudis have also arrested Abdulaziz al-Fawzan, and Qatari and Muslim Brotherhood fronts have launched a “human rights” campaign in his defense.

When the media stands on the side of Qatar, this is what it’s supporting. And the stench of Qatari collaboration is worse than even the smell of sweat and urine in Times Square on New Year’s Eve.

The Qatari terror regime is closely tied to Iran and backs every Islamic terror movement from the Taliban to Hamas. The 9/11 Commission report found that a member of the Qatari royal family had harbored Sheikh Khalid Mohammed, the mastermind of the 9/11 attacks on America.

Abdulkarim al-Thani, a member of Qatar’s royal family, allegedly ran a safe house for Abu Musab al-Zarqawi, the mastermind of Al Qaeda in Iraq, the terror group that eventually turned into ISIS.

Why bother subjecting tourists from Wisconsin and Texas to multiple screenings to stop ISIS, when you’re using the ball drop as a platform for the political allies and backers of ISIS?

After-Christmas Scrooge: "God Bless Us, Everyone"