America is full of visible and invisible walls. In the first half of the last century, our politics had been dedicated to tearing down the walls between classes, races and genders. And then in the second half of the century, radicals terrified of what that meant for their plans, began building them up again while adding new divisions until every city, workplace and even family is divided by many invisible walls.

Walls represent divisions. Whether you support or oppose a particular wall depends on whether you believe a division is legally, morally or philosophically legitimate. The walls that the radicals want to tear down are the walls distinguishing and defining concepts that they don’t believe in, such as nations and genders, while building walls of segregation to separate races and classes. 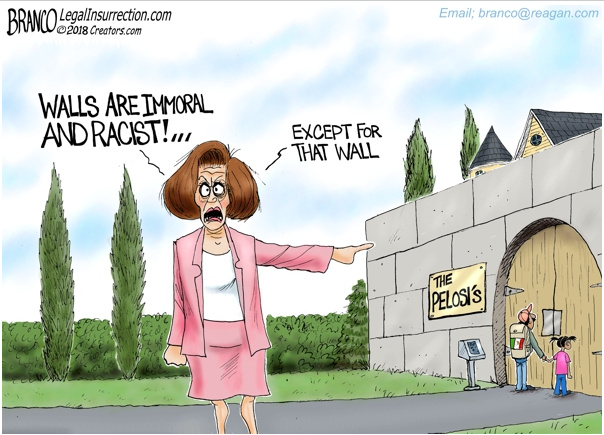 When Speaker Pelosi calls a border wall immoral, it’s not because she believes that physical structures of steel and stone are immoral, but that the concept that a wall protects, that of the nation and its citizenry, is immoral to the radical mind.

That’s an important debate worth having because the rejection of America as a distinct nation, as opposed to a distinct idea, gets at the heart of the opposition to so much of Trump’s agenda from both parties.

Unfortunately neither Pelosi nor her media allies are willing to honestly put forward their views and debate them. Instead they make false claims of supporting border security in principle, while opposing it at every turn in practice.

Politicians who claim to support a popular idea in principle while resolutely opposing every attempt to implement it are actually its unprincipled opponents. And the best way to expose them is by forcing them to live up to the principles that they don’t have.

That’s what President Trump did by moving the embassy to Jerusalem. And then all the politicians who had voted countless times to move the embassy, pundits who had composed countless essays in support of the principle, argued loudly that now was not the time. Nor was any time in the future going to be the time.

The wall shutdown tests the truth of the same principles, forcing the Democrats who shut down the government to stop a border wall into a confrontation that outs their opposition to border security, to walls and to the nations behind them.

The border, like the truth of the border, has become a nebulous place. Illegal migrants and drug dealers, terrorists and traffickers, cross it where there is no wall and no definitive way to maintain a barrier between law and lawlessness, between nations, and between civilization and anarchy. And the truth of the border has also become nebulous with opponents of border security claiming to be its defenders, with the profiteers in trafficking children claiming to be their protectors, and with judges declaring that fighting illegal migration is illegal.

When there is no wall, then physical and moral security both become precarious. Walls don’t just lock in physical geography, but also moral geography by maintaining definitions, separating fact from fiction, and preventing the slippage of moral and physical territories into states of physical and factual anarchy.

A breakdown in border security is not only a physical breakdown, it’s a moral collapse. We aren’t lacking in the physical resources that are needed to construct a wall and to secure the border. America was able to secure the border in lower tech times with fewer resources and less money. And we regularly waste far more money on useless things than the cost of that “immoral” wall.

What we lack are the moral resources to secure the border. The struggle over the shutdown is not a battle over resources, but a struggle over morals. President Trump understands that and has fought it that way for a reason. He has already made the case for self-interest. But the inconveniences of the shutdown require being able to tolerate immediate pain for the eventual relief of greater suffering. Only a moral argument can be used to sell delayed gratification.

A nation offers obvious advantages of self-interest, but its survival requires more than that. In times of crisis, it demands self-sacrifice that transcends self-interest. The everyday governance of a free nation may be rooted in the self-interest of ordinary democracy, but if its citizens cannot sacrifice their temporary interests for something higher than their momentary needs, the nation is lost.

Radicals pretend to make moral arguments, but their morality actually rationalizes selfishness, immediate gratification, theft, hatred and a host of evils. They lie about the consequences of their policies while cultivating an electorate that is incapable or unwilling to see past the emotive messaging of the moment.

A wall is an absurd abstraction to much of the electorate. Those who aren’t near the border don’t see how it will benefit them personally. And many in the suburbs who turned on Trump and the GOP see how cutting off the flow of cheap labor could hurt them economically. Much like the trade war with China, millions no longer have any sense of a national interest, only a personal one. But a nation with no national interests, only personal ones, will ultimately see even those lost.

The radicals have deliberately cultivated a loss of faith in national institutions because an electorate that operates in purely selfish modes is easier to divide along the lines of special privileges, welfare, subsidies and giveaways. And an electorate corrupted by unequal treatment is quick to assume that its opponents are motivated by corrupt agendas and are benefiting even more than they are.

Like the lack of a wall, these divisions have torn apart the country by withholding unity and definition. The radicals claim that the concept of a wall is divisive, but it’s actually unifying. Walls encompass what is within and thereby create unity. Without a wall, there can never be unity, only endless divisions. Where there is no wall that we can agree on, it is inevitable that we will build our own walls. And when there is no single principle worth fighting for, we will fight over everything.

The opponents of a wall are also opponents of truth. Not just any specific fact, but the very notion of objective truths. Radicals prefer their facts, like their borders, to be diffuse and subjective. They want ideas to travel across it based on emotional appeals, special pleading and ad hominem attacks rather than by forcing them to abide by the barrier of some fixed and unchanging standard.

The battle over a wall is at its heart a battle over truth in both the general and the specific senses. The supporters of a wall have repeatedly laid out their motives and reasons, while the opponents of a wall paradoxically claim that they support border security and oppose illegal migration, but want to abolish ICE and will shut down the government to stop a wall from ending illegal migration.

The opponents of a wall believe in telling any lie that gets them closer to their true goals. Walls and objective truths are inherently alienating because they are fixed moral structures. And, even as radical wall opponents offer up a torrent of moral pleas, they lack the most essential basis of morality, which is neither outrage, nor perpetual victimhood, but consistency of principle and action.

Lemons (Not Apples) For the Yellow Journalism Teachers