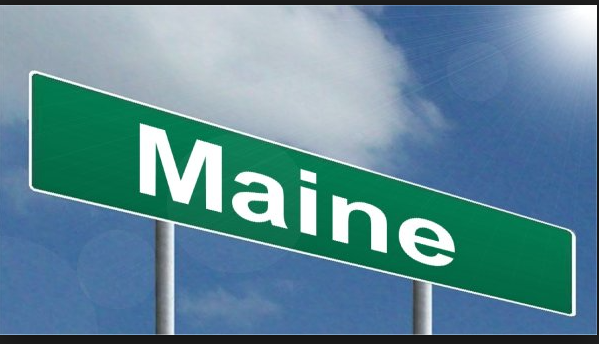 When Americans think about border security, they usually imagine the floods of migrants crossing the border and showing up in Texas and Arizona. The illegal migrant crisis is at its worst in places like El Paso where gang members released by a broken immigration system swarm the streets. Limited border fencing had previously helped sharply cut crime rates in El Paso, but it doesn’t end in El Paso.

2,500 miles away, Portland, Maine is experiencing a crisis that redefines the nature of the problem and whom it impacts. Illegal border invaders aren’t just from this continent. Anyone who can fly into South America and make their way up to Mexico has a shot at crossing the border and invading America.

Portland shelters, 2,500 miles away, are overloaded by illegal migrants from sub-Saharan Africa who crossed the border and then kept right on going to one of the coldest, but most profitable parts of the country. Portland, like many areas in Maine, attracted migrants because of the generous social safety net that had been set up to help the local population deal with turbulent economic times.

Hundreds of African migrants who illegally crossed the border are now crowding Portland’s homeless shelters which are meant to protect local residents from the cold, but have instead been overrun by foreign migrants who have taken over the system and pushed the progressive city to the edge.

Portland, Maine, a city where the temperature this April had hit a balmy 28 degrees, is not a natural homeless hotspot. But refugee resettlement had diverted resources away from helping Maine’s poor, putting more people on the street, and the migrants began crowding into homeless shelters. Not only were Maine’s poor having trouble finding housing, but they were even being pushed out of homeless shelters by aggressive foreign migrants coming out of Africa through Mexico and Texas to Maine.

And so Maine, an unlikely place to host a homeless crisis, is in the throes of one anyway.

Portland, a city of 67,000, hit a new homeless record in October with 500 people in its shelters. That’s 0.74% of the population. The flood of illegal migrants has hopelessly overloaded shelter resources leading to people sleeping on the floor in offices and gyms. When all the shelters were full, hotel rooms had to be rented at a much higher cost to taxpayers, while poisoning the well for future tourism. Now an entire building has been leased just to find space for the endless tide of economic migrants.

There are an estimated 3,000 asylum seekers in Maine. Most of them are occupying Portland.

In early December alone, 199 foreigners wanted to get into the shelter system in Portland. 126 of them had come through the southern border, either by illegally invading it or by falsely claiming to be “refugees”.

While the media emphasizes hard luck stories by homeless Americans, the ugly secret is that the huge increase in Portland is not caused by local economics, but by legal and illegal migrants.

A 2013 survey found that 50% of the individuals in the shelter system were refugees, immigrants, asylum seekers or other foreigners. Of the 509 residents, 128 were Iraqis, 89 were Somalis, 47 were Sudanese. And then there were the Afghans and Eritreans. That’s Portland’s “homeless” problem.

Since then, the migrants have comprehensively displaced Maine homeless place from the system.

In 2018, 86% of the people in the shelter system were immigrants. By the end of the year, the number had climbed to a horrifying 90% with Maine families almost crowded out entirely.

Portland’s Democrat leaders have refused to maintain eligibility criteria for general assistance and spending has shot up to $10 million. The second biggest expense for GA is shelter beds.

1/3rd of Portland’s general assistance caseload consists of immigrants, many of them refugees.

Instead of prioritizing Mainers, the Democrat government has doubled down on putting migrants first. Mayor Ethan Strimling is urging $10 million in spending on affordable housing. A 2015 effort to go on using GA for migrants was backed 5-4 by the Portland City Council after testimony from Fatuma Hussein, the head of United Somali Women of Maine, even though state education money was being diverted.

The aid to Somali and other migrants was also paid for by a 3.1% property tax increase. Rising property taxes have contributed to a shortage of affordable housing in Portland, putting Mainers on the street and in the homeless shelters, if they can get in, past the foreign migrants who made them homeless.

Maine’s 16.5% increase and Portland’s staggering 70% rise in homelessness defies the overall economic recovery. The Oxford Street Shelter used to have beds. Then it switched to cots and finally to mats on the floor. The two blocks between Oxford and the Preble Street Center, another homeless magnet, are part of a diverse area populated by “recent immigrants”. The Islamic Society of Portland is less than ten blocks away and many of the migrants filling up Portland are Somali Muslims. MAIN, the Maine Immigrant Access Network, a vector for the social problems plaguing Maine, sits on Oxford.

MAIN is mostly oriented toward Somalis. Its team is entirely Muslim and almost entirely Somali. It’s typical of the vast social services infrastructure that has been set up to care for the migrant population. The social services sector employs a growing number of migrants who get profitable government jobs caring for migrants. And there’s every possible incentive for them to continue increasing their numbers.

Even if it means that native Mainers are left out in the cold. Sometimes literally.

There are more mosques in Portland than any other city in Maine. That includes the controversial Afghan Mosque. Deqa Dhalac, a Somali immigrant, defeated a local to represent District 5 in the City Council. Like so many employed members of her community, Dhalac was working as a social worker.

When the City Council appointed a Maine firefighter to the Civil Service Commission instead of her, she filed a complaint with the Maine Human Rights Commission and the City Council was forced to undergo diversity training. That’s how Democrats hope to create a permanent Dem majority in Maine.

Mayor Strimling has even suggested allowing non-citizen foreigners to vote.

The catastrophic disaster in Portland, Maine has robbed the native population of needed social services while diverting them to foreign migrants. While President Trump has moved to reduce the number of refugees bleeding communities like Portland of their resources and their future, there is a new threat.

Three or four African families are now arriving in Portland’s shelter system every week after crossing the border. Many more, according to Portland’s social services director, are waiting in Texas in detention centers, eager to come to Portland. “We can’t sustain what is happening,” he was quoted as saying.

“We’re at a crisis situation now in the city of Portland,” City Manager Jon Jennings declared.

“Our issue isn’t that too many people are coming here – it’s we don’t have the housing to put them in,” Mayor Strimling bafflingly insisted.

Portland’s only plan for managing the problem is to pass the buck to the Maine and United States governments. Multiply all the “Portlands”, lefty cities that go deep into debt to attract illegal aliens in order to expand the political power of the Democrats, and it easily surpasses the $5 billion wall.

The crisis in Portland shows once again why building a wall to keep out a horde of migrants is a smart, sensible and cost-effective solution. Even the biggest proponents of open borders can’t actually pay the tab for illegal migration, even when they’re 2,500 miles away from the border in a cold state.

If they can’t do it, how can anyone else?

Open borders are unsustainable in Texas, California, New Mexico and Arizona, and even in Maine. Building a wall will not only protect the states that share a border with Mexico, it will even protect a state that shares a border with Canada.

And all of America.