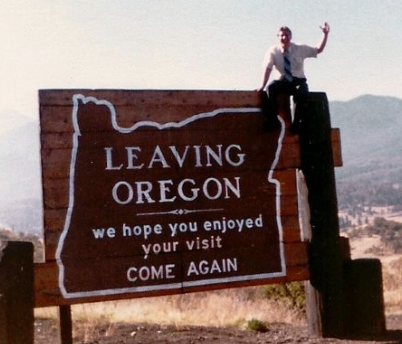 It was a big year in Portland where the murder rate rose 18.6%. That was the perfect time for Portland’s progressive politburo to spend over $1 million on unarmed cops armed only with pepper spray.

There was a little bit of excitement when it was learned that their 200 hours of training would include “Taser Orientation” suggesting that they might be allowed to carry tasers. But Mayor Wheeler’s office explained that the weaponless cops weren’t being trained to use tasers, but “how to avoid being tased”.

Portlanders aren’t waiting for officers to show up and shout, “Don’t tase me, bro”. Instead in a city overrun with crime, they’re increasingly taking matters and guns into their hands.

Of the 32 violent deaths in Portland last year, 5 were found to have been carried out in self-defense. That tops the 4 deaths that occurred as a result of shootings by those cops who still have their guns.

Richard R. Hanley showed up in the parking lot outside Timeless Tattoo. The California homeless bum had previously made the news when he was arrested for attacking his ex-girlfriend and her new beau with a metal chain. Hanley, already on probation for a domestic abuse and strangulation conviction, with six felony and seven misdemeanor priors, also pulled out huge clumps of a female deputy’s hair.

The repeat offender began setting up his tent in the parking lot. When a female catering manager asked him to stop, he attacked her. Joseph D. Vinci, a tattoo artist, intervened. Hanley pulled a knife and Vinci pulled a gun. And Hanley’s long reign of terror ended to the outcry of local pro-crime activists.

Portland’s other homeless death had a much darker ending.

Dallas Boyd, a 29-year-old mother of a two-year-old, was strangled to death by a homeless man and her body was left to rot in his van. Like Hanley, the homeless killer had racked up nine felonies, six misdemeanors and 15 parole violations, including third-degree assault, and first-degree robbery.

Homeless crime has become both routine and terrifying. One Portlander described being threatened with a machete on a children’s playground, and it’s taken the city’s crime problem to new levels.

15% of Portland’s violent deaths in 2018 involved the homeless in some way.

Portland property crimes rose 15% in 2017. Its property crime rates easily outpace Boston and Denver, and put it on a par with dangerous cities like Atlanta. Its homeless blight has put Portland on the same path as San Francisco, New York and Los Angeles. Portland’s Downtown Clean and Safe had picked up less than 9,897 used needles in 2015. This year it’s 39,000. Garbage and biohazards have also increased.

“Chief Outlaw leads a bureau with fewer officers today than a decade ago, despite a 10 percent increase in Portland’s population,” Wheeler whined.

Mayor Wheeler had picked Danielle Outlaw as the first African-American police chief. Outlaw was meant to be the face of Portland’s new inclusive and diverse force. She inherited the thankless job of trying to control homeless crime, without offending homeless advocates, and reining in political street violence without offending Antifa. And soon white hipsters were outraged at Chief Outlaw’s contemptuous dismissal of Antifa as schoolyard brats who, “come with the intention to fight. And then you get mad because I kicked your butt. And then you go back and you wail off and whine and complain.”

Chief Outlaw had also cleared the Occupy ICE encampment without the mayor’s approval, after he had insisted that the police should do nothing to interfere with the harassment of ICE employees.

Portland’s white radicals soon began accusing the city’s first African-American police chief of being a white supremacist while campaigning to get her fired.

“The fact that I, as a very obvious African American female police chief, have been accused by those within that group or those who support that group, as being a supporter and protector of those who are believed to be white supremacists—if that’s even the case—is ridiculous. Right?” she asked.

Ridiculous is the only way that anything works in Portland.

Mayor Wheeler’s virtue signaling is being ignored by his own police chief while citizens are taking the law into their own hands. The tattoo parlor was only one of five self-defense killings in Portland.

Self-defense killings made up a sixth of deaths by violence in the past year. These included a U-Haul employee shooting an armed robber, a transgender man shot by a homeless woman after he tried to stab her with a knife, and a FedEx driver who killed a man in a fight over racial slurs.

The U-Haul robber had 9 previous convictions, including robbery, burglary and rape.

These are the warning signs of a dysfunctional city spinning out of control.

Mayor Hale, Wheeler’s predecessor, who turned Portland into a homeless encampment zone by refusing to enforce laws against bums setting up tents on public streets, decided not to run for reelection. His predecessor, Mayor Adams, is enmeshed in a sex scandal which involved an underage boy, sexual harassment, blackmail, and allegations of using an employee for sexual procurement.

Mayor Wheeler won’t go out with a sex scandal, but like his predecessor, he’s unable to reconcile the demands of virtue signaling in a leftist city with the practical problems caused by its implementation. The leftist solutions he’s tried, spending more on homeless services, demilitarizing and diversifying the police, have only backfired.

Portland, like countless other Democrat urban strongholds, proved that the more money is spent on homeless services, the worse homelessness becomes. Disarming police officers leads to more people taking the law into their own hands. And black cops will enforce the law just like white cops. They’re also less cowed by political correctness and more willing to speak their minds than their white counterparts.

The city government has turned Portland into a miserable hellhole, but individuals are stepping up.

In the Montavilla area, the Montavilla Initiative has been organizing neighborhood watches, foot patrols and monitoring area crime. Pro-crime and homeless advocates have accused them of being “vigilantes”, but area residents see them as filling a vital need. It’s one of eight patrol groups in the area.

The Initiative describes a neighborhood needle exchange program degenerating into “human waste in neighbors’ yards, a large vehicle hosting drug deals in the parking lot of the exchange, heroin users shooting up and passing out and then driving off intoxicated, people urinating and defecating in public, clients shooting up in neighbors’ yards, even having sex on a neighbor’s front porch.”

It’s no wonder that Portland’s formerly hot housing market is cooling off and home values are falling. As housing prices increase, not everyone wants to pay record prices to live next to a needle exchange.

The escape from Portland has begun.

The Wall: What Does It Really Come Down To?

Prager University: What Does Diversity Have to do With Science?