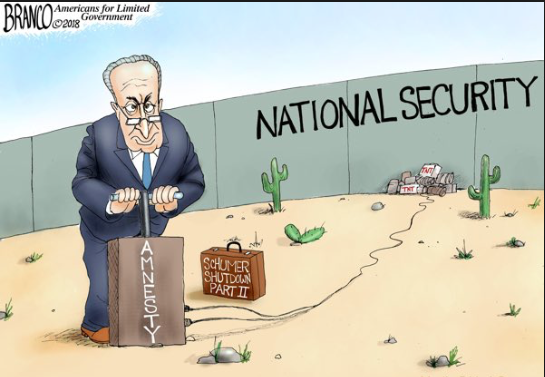 After the Cold War, what is the biggest threat to America? The debate between Obama and Romney famously bogged down over the question of whether Russia was our biggest geopolitical foe. While Obama slammed Romney’s answer as a Cold War relic, after losing the next election, his party defines its foreign policy and domestic opposition around the fear that Russia is now more of a threat than ever.

Answers by other politicians have ranged from the structural, the national debt and internal divisions, to the inanimate and absurd; Bernie Sanders’ claim that global warming is our top national security threat. But assessments that name conditions rather than threat vectors are unhelpful because even when they are right, they tell us to address a weakness or failure, rather than meeting an external threat.

Being able to name and define external threats is vital for reaching informed national security decisions.

The debates over border security, Syria, Afghanistan, and Russian informational warfare have been taking place in a chaotic environment of rapid fire talking points backed by ideological agendas, but with no framework for understanding the larger threat environment and how to achieve national security.

Our national security framework dates back to the Cold War. The doctrines we employed during the Cold War quickly became dated even while the Soviet Union was around. They’re so old now that the vast majority of Americans weren’t even born when they were hatched. And yet in the generation since the Cold War ended, we haven’t found anything new to replace them with. And that is the problem.

The Clinton administration ignored national security and put the military at the disposal of the UN on exercises in nation building that helped revive Russia as a serious threat while ignoring the threat of Al Qaeda. The Bush administration rolled out nation building as a response to Islamic terrorism. This was a misguided approach that failed to understand the nature of the threat and how to address it.

The Obama administration combined the follies of both of its predecessors and added more of its own, by harnessing Clinton style nation building to Bush style interventions with the aim of defusing Islamic terrorism by helping the Muslim Brotherhood and other Islamists come to power in the Middle East.

The result was genocide, ethnic cleansing, beheadings, sex slavery and more terrorism than ever.

To build a realistic national security strategy, we have to discard the Cold War framework under which every administration beginning with Truman and Eisenhower had operated under. We are no longer dealing with a global struggle against an ideological movement based out of a global superpower.

And it’s the global part that is the problem.

Successive administrations have thought of national security as a global issue. But it’s not a global issue. It’s a national one. That doesn’t mean that we should abandon support for NATO or our allies. But we should stop trying to envision national security as something that emerges from global alliances. That worldview may have been relevant during the Cold War, but it’s no longer meaningful today.

Instead we need to think of national security as inside out, coming not from outside America, but from inside it. We don’t face a serious risk of invasion by a military superpower. It may be a generation until China has the military capabilities to embark on such a venture. And while we shouldn’t neglect exploring what a Chinese Pearl Harbor might look like, we first need to get our own house in order.

Our domestic threats in this century have all involved infiltration, whether it was the Islamic colonists who carried out the 9/11 attacks and succeeding acts of terror, and the Chinese and Russian hacks and espionage operations that exposed our military secrets, wrecked the NSA and weakened our defenses.

These catastrophes make it clear that there can be no national security without securing the nation.

That includes border security. Regardless of how many terrorists may have come across the unguarded border (even one is too many), efforts by the Trump administration to reduce travel from terror states and refugee admissions will lead terrorists and future terrorists to seek alternative means of entering this country. And securing the border closes a major vulnerability in our national security.

Furthermore, while Iran’s nuclear program remains a major national security threat, a nuclear attack on America is likeliest to come through a nuclear device smuggled by terrorists across the border. It may never happen, and hopefully never will, but failing to prepare could be a disaster that would make the national security failures that allowed the 9/11 attack to take place seem almost inconsequential.

If we examine the American conflicts of this century, it’s easy to see that they had their roots in immigration, migration and open borders, both physical and virtual. We’ve lost over 10,000 Americans in wars caused by a failure of immigration security. And the national gun violence rate is largely fed by gang violence. Much of that gang violence is caused by legal and illegal immigration to the United States.

National security threats can be most clearly measured by the violent deaths of Americans inflicted on us by organized movements and groups. It’s undeniable that these have originate with immigration.

China and Russia remain geopolitical threats. But their attacks depend on infiltrating our country through the internet or immigration. Informational security is vital to any future conflict. A Chinese Pearl Harbor would likely begin on the internet. And so is immigration security. Chinese and Russian operatives, like their Islamic counterparts, have to enter the United States. If we can secure immigration and secure information, we will have effectively neutralized their attacks for the time being.

Aside from the loss of life, Islamic terrorists have inflicted trillions of dollars in economic losses on the United States, second only to the People’s Republic of China. And as the Islamic colonies increase in size, they begin to pose an increasingly greater threat. Islamic colonies in France and Sweden have shown behavior resembling the early stages of guerilla warfare. The same thing will happen in America.

That is why immigration security must be the first priority of any national security strategy. The second priority should focus on weakening terrorist groups and their state sponsors abroad, but without the extensive nation building commitments that have bogged down previous administrations.

We should also avoid the Cold War’s sociological preoccupation with root causes abroad. Sociological philosophizing failed miserably in the Great Society. There is no reason to believe that the same approach that failed at home will work any better when applied to other societies and cultures.

It isn’t difficult to identify malaises in the Muslim world, but we should be wary of facile solutions, such as democracy, feminism or microfinance, for solving them. The United States did not fix the social problems of Communism. Instead it sought to contain Communist states, limiting their influence, preventing their expansionism, and allowing their own social problems to destroy them.

Instead of nation building in Muslim countries, we should aid non-Muslim or secular countries under siege by Islamists, containing and limiting the spread of Islamic ideology abroad and at home through economic, informational and military means, when appropriate, without extended occupations.

The interregnum between the fall of the Ottoman Empire and the fall of the British Empire marked a period of Islamic military, cultural and political decline. The Cold War era revived Islamic fortunes as the United States and the Soviet Union invested extensive wealth, information and training into Muslim countries. After the fall of the Soviet Union, Muslim terrorists backed by Muslim states emerged as the leading antagonists of the United States, Europe, Russia, China and other non-Muslim world states.

While a global alliance against Islamism, similar to the one against Communism, might be ideal, it is more likely that America’s geopolitical antagonists, Russia and China, will instead back Muslim factions in proxy wars against us. We must stop doing the same thing no matter how appealing it may seem.

Political and military engagement with Islamic forces badly weakened both America and Russia. After two generations of arming, aiding and collaborating with Islamic terrorists under the Soviet Union, and then another generation of Putin’s Eurasian experiment aimed at integrating Islam into a new Russian empire, our old antagonist has doomed itself. We should learn the urgent lessons of Russia’s folly.

Because they are also our own.

America’s Cold War alliances with Islamic countries helped create the wave of terror. Our openness to Islamic immigration was once seen as a means of building Cold War alliances. Instead it has killed over ten thousand Americans and put us on a path to a religious civil war similar to that of Europe.

Cold War divisions have deeply divided Americans. The collapse of religion and traditional values, accompanied by mass migration, and the disruptive qualities of the internet, have fragmented any notion of national unity. The firehose of mass migration is hitting all of our fracture points, ideological, economic, social and cultural, at the same time. It’s also the essential vector for Islamic terrorism.

America needs time to recover from the economic, social, cultural and technological disruptions of the last hundred years. And it needs breathing room to prepare for the geopolitical conflicts to come.

American elites continue focusing on a global order while ignoring the decline of the United States. A broken America will be unable to meet any geopolitical threats abroad. Any national security strategy that does not begin with securing our own national security at home will be doomed to fail.

Democrat opposition at the state and judicial level has prevented President Trump from exercising control over immigration, protected terrorists and gangs, while leaving our borders unsecured. States and cities openly defy immigration authorities and Democrat judges sabotage any effort at controlling the flow of legal and illegal aliens into our country. This thoroughly cripples our national security.

America’s national security depends on restoring the control of the executive branch over our borders.

WW1: The War That Changed Everything

Brannon Howse: The Marxist Revolution in the USA