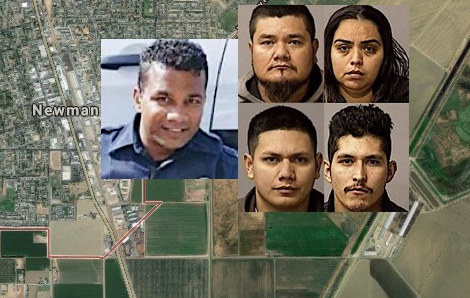 Less than 200 miles separate Tulare County and Stanislaus County. And a little over a week separates the two reigns of terror in these two California counties by Gustavo Garcia and Gustavo Perez Arriaga.

Both Gustavos were dangerous and violent illegal aliens. On Monday, December 17, Gustavo Garcia went on a murderous rampage that killed at least two people and put seven more in the hospital. On Wednesday, December 26, Gustavo Perez Arriaga murdered a law enforcement officer at a traffic stop.

Cpl. Ronil Singh, murdered by the second Gustavo, and Rocky Paul Jones and Rolando Soto, murdered by the first Gustavo, did not have to die. They died because California’s sanctuary state law took their lives.

Gustavo Garcia had a criminal record dating back to 2002 covering everything from illegal weapons to meth. He had been deported in 2004 and then again in 2014. There had been three immigration holds on the illegal alien criminal. Before he began his murderous spree, Tulare County sheriff’s deputies arrested him. ICE put a hold on him as a dangerous illegal alien. But because of California’s sanctuary state law, local law enforcement had to let him loose. A few days later, the illegal alien’s carnage began.

Garcia shot a farmworker picking fruit in the chest, robbed a mini-mart at gunpoint of $2,000, shot and killed a man, shot at a woman in the parking lot of a Motel 6, wounding her in the arm and torso, opened fire at two gas stations, killing Rocky Jones, fired shots into several homes, including the home of his ex-girlfriend, forcing her and her children to flee, opened fire on the deputies pursuing him, stole a car from three other farmworkers at gunpoint, and got into a high speed chase while deliberately trying to hit other cars.

He exchanged fire with pursuing cops during the chase, and smashed into other cars while going 100 miles, taking his own life and putting four other people in the hospital, including one critically wounded.

And that’s actually an incomplete list of the illegal alien killer’s crimes after the ICE hold wasn’t honored.

“Before SB 54, Gustavo Garcia would have been turned over to ICE officials. That’s how we’ve always done it, day in and day out. After SB 54, we no longer have the power to do that,” Sheriff Mike Boudreaux said.

A little over a week had passed when Gustavo Perez Arriaga was pulled over on suspicion of drunk driving early in the morning. He shot Cpl. Ronil Singh, an immigrant from Fiji, and led law enforcement on a 55 hour manhunt as he fled for the Mexican border. When he was caught, he had traveled around 200 miles from the original scene of the crime. And he had taken the life of a family man and corporal.

Gustavo Perez Arriaga was an illegal migrant who had crossed the border into Arizona a few years ago. The illegal alien was allegedly a member of the Sureno gangs operating under the Mexican mafia. While he found employment as a farm worker, he boasted about his gang membership on social media and racked up drunk driving arrests that couldn’t be used to deport him because California’s sanctuary state law prevented law enforcement from doing anything until it was too late. Now it’s too late.

Stanislaus County Sheriff Adam Christianson blamed California sanctuary state laws for Singh’s death and questioned why Sacramento was “providing sanctuary for criminals, gang members”. Cpl. Ronil Singh would have been alive, he pointed out, if his future killer had been deported.

Sanctuary state law advocates claim that they want to protect immigrants. Instead they killed one.

“Deepest condolences to the family of Cpl. Ronil Singh of the Newman Police Department. Our hearts are heavy during this holiday season. You truly lived the American Dream,” Senator Kevin de Leon tweeted.

Singh “immigrated here lawfully and legally to pursue his American dream,” Sheriff Adam Christianson said. “He achieved that goal and his dream was taken from him.”

Under fire, Senator Kevin de Leon doubled down on putting illegal alien criminals ahead of legal immigrants. “The type of tone and attitude that Sheriff Christianson has taken instills fear and panic in all immigrant communities,” he ranted. The immigrants attacked by his illegal aliens may disagree.

Meanwhile ICE Out of California, the pro-illegal pressure group, blamed the illegal alien crime spree on “gun violence”. “The California Values Act,” it claimed, “is part of the solution.”

Law enforcement officers, even those like Sheriff Boudreaux, who support illegal aliens to some degree, however agree that the sanctuary state mandate is costing lives.

“We are very frustrated with the fact that the way the laws are set up currently that law enforcement hands are tied,” Sheriff Mike Boudreaux said. “Our county was shot up by a violent criminal that could have easily been prevented had we had the opportunity to reach out to our fellow counterparts.”

In Fresno County, Sheriff Margaret Mims has faced harassment over her cooperation with ICE. “It’s ridiculous the state dictates the local law enforcement which other law enforcement agencies they can and can’t talk to,” she said.

Sheriff Alex Villanueva’s upset victory had allegedly been illegally lubricated by straw donors. And the pro-crime figure is vowing to go further than ever to protect illegal aliens and has even threatened to “physically remove ICE from the county jails.

” Across California, the sanctuary state law has been putting more illegal alien criminals on the street.

In Monterey, ICE detentions dropped by 83%, from 217 to 36. In San Luis Obispo County, the 87 illegal alien criminals picked up by ICE in 2017 had dropped to 0. Other counties have been partial holdouts, maintaining some limited and diminishing cooperation with ICE despite illegal alien lobby pressure.

Similar battles are being fought in counties across California as the number of illegal criminals grows.

Sanctuary state defenders claim that these illegal alien criminals are exceptions to the rule. But when Gustavo Perez Arriaga went on the run, after murdering a law enforcement officer, a network of illegal aliens stepped out of the shadows to help him flee justice and return to Mexico.

7 men and women were arrested for aiding the cop-killer. Every one of them is an illegal alien.

Brannon Howse: The Marxist Revolution in the USA