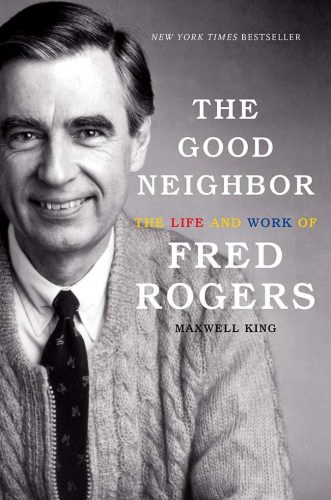 In the annals of television history there have been many icons. But I doubt many would think of Fred Rogers as one (he probably wouldn’t himself), but he is. And in the wonderful new book “The Good Neighbor”, Maxwell King covers the life and career of the man that we all knew as Mr. Rogers.

We learn of the early days of his career at WQED in Pittsburgh and follow his path to the newly emerging PBS. “Mr. Roger’s Neighborhood” was one of the first shows to appear on PBS. Mr. King takes us behind the “scenes” to see the making of the classic show. We learn that Fred Rogers was meticulous in what was said on his show. He never wanted to mislead or confuse a child between what was reality and what was make believe. “Fred Rogers had absolute clarity about the techniques and messaging that were appropriate for his young viewers.” And throughout his career he was steadfastly adamant that there was no ads targeting children. He felt this was immoral and a method with which children were taken advantage of. This stance cost him an opportunity to have his show on a major network.

King describes how children so identified the man with the person they saw on television. Often when he was out in public children would run up to him, hug him and tell him what was on their minds. And every time Mr. Rogers would stoop down to their level and listen. There was no barrier between him and his audience. He was always there for any child that wanted to talk to him. Humorously this led to a complete breakdown of an early episode of The Oprah Winfrey show. Having warned her not to have children in the audience for the show (knowing Fred Rogers would not be able to refrain from engaging with the kids) they packed it with children anyway. And of course the children started asking him questions and Rogers just had to interact with them. Oprah quickly lost control of the show (no cars for anyone that day!).

Fred Rogers spiritual faith is also covered in the book. He was a devout Christian who took Jesus’ command to love you neighbor and made it the theme of his career. While not explicitly invoking religion or the bible on his show, he lived the Gospel through the character he portrayed on the show – love, peace and acceptance. In fact, he had initially planned on a career in ministry, graduating with a master of divinity in 1963. But God had other plans (as He often does). Yet I can’t help but think that he did accomplished ministry work, just through another path. His faith also helped him deal with difficult subjects on the show such as divorce and death. Mr. Roger’s Neighborhood did not ignore the reality of life. They dealt with it head on and in a way that was not scary to the children (using a goldfish that had died as a way to talk about/explain death).

One of the most interesting takeaways from the book was that Fred Rogers was a musician and songwriter. He wrote dozen of operas for his show and was an experienced piano player. He also composed classical pieces including “Variation on a theme of Chopin”. Many performers such as Tony Bennett and Rita Moreno made visits to the neighborhood. And who can forget songs like “It’s a beautiful day in the neighborhood” and “It’s you I like”.

And of course there were the puppets who became legendary in their own way: King Friday XIII, Queen Sarah, Henrietta Pussycat, X the Owl, Lady Elaine Fairchilde, Daniel Striped Tiger, and Grandpere. Each showcased a side of Fred Roger’s own personality (as Charles Schultz did in the Peanuts characters). And it wasn’t just the kids who liked the puppets. Even those who worked on the set loved them and sometimes forgot that it was Fred doing the talking as Josie Carey tells: “I would get so engrossed in the conversation, especially with Daniel, that after it was over I would go around the back of the set and tell Fred what Daniel had said to me, totally forgetting that Fred WAS Daniel”. Maxwell King even relates a story about a phone call Susan Stamberg got from Daniel Striped Tiger helping her deal with her anxiety about working on the show!

In an interview in 2000, Fred Rogers talked about his early vision he had for his show: “I’d love to have guests and present a whole smorgasbord of ways for children to choose. Some child might choose painting, some child might choose playing the cello. There are so many ways of saying who we are, and how we feel. Ways that don’t hurt anybody. And it seems to me that this is a great gift”.

We sure need more people like Fred Rogers in the world and on television. This memoir of Fred Roger’s life was a refreshing read and one I am sure you will enjoy.