Once again, Trevor Loudon has uncovered deep communist ties, or as he calls the ‘subversion of California’ within the Democrat Party.

From Trevor’s report at The Epoch Times: 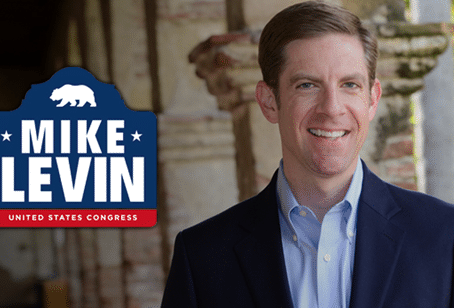 The Democratic Party’s clean sweep of California’s once deeply conservative Orange County brought several new far-leftists into the U.S. House of Representatives. One of the most radical is the 49th District’s new congressman, Mike Levin.

The freshman representative has already joined the communist-allied Congressional Progressive Caucus—not a surprise, considering that socialists and communists helped get Levin elected.

Levin beat Republican Diane Harkey by nearly 14,000 votes, so the Marxist help was probably not decisive in the general election. However, one of Levin’s socialist supporters has admitted that they engineered his nomination by out-maneuvering his Democratic primary opponents.

The 49th District was always a major target for the left. When incumbent Darrell Issa retired, it became a top priority. Even before the candidate primaries had been decided, a group—Flip the 49th! Neighbors in Action—was created specifically to turn the very marginal seat blue.

“The closest Congressional race in the Country is in our backyard. In 2016, the Republican won by just 1,621 votes. In order to stop the corrupt and chaotic agenda of the Trump Administration, the Democratic Party must win control of Congress. The path to winning back the House runs straight through our home in California’s 49th Congressional District,” states the group’s website.

Flip the 49th held rallies, knocked on doors, and phone-banked for Levin. They were the backbone of his campaign.

The Flip the 49th leadership team consisted of David Lagstein and Terra Lawson-Remer. Lagstein was once a leader of the scandal-plagued leftist voter-registration group, The Association of Community Organizations for Reform Now (ACORN). He was one of the earliest targets of the undercover investigative team of James O’Keefe—of Project Veritas—and Hannah Giles, which exposed many of ACORN’s corrupt practices in 2009.

According to the San Diego Union-Tribune:

“ACORN’s local director yesterday fired the community organizer who was caught on video providing advice about crossing the border to a couple posing as a pimp and a prostitute as part of a national sting.

“Fox News aired a 52-second video Wednesday night showing the ACORN employee, Juan Carlos Vera, answering the couple’s questions. They later said they were talking about young girls from El Salvador being brought over for a prostitution ring. One snippet showed Vera asking the woman how much her services cost.

“At a news conference yesterday afternoon, David Lagstein, director of the ACORN office in National City, said he believed that his employee had done his best to deal with a challenging situation and would not be disciplined.

“But two hours later, Lagstein said he had seen a seven-minute version of the video and decided that Vera’s statements in the video contradicted what Vera had told him and were unacceptable.

“Lagstein said he still considers the secret videotaping to be ‘unscrupulous’ and part of a smear campaign designed to distract from the debate on health care reform.”

Lawson-Remer is a fellow at the Center for Advanced Study in the Behavioral Sciences at Stanford University. Lawson-Remer is also the founder and managing partner of the Catalyst Project, which is closely affiliated to the pro-China Freedom Road Socialist Organization.

It turns out that Lawson-Remer has a long history of hard left organizing and apologizing for communists.

She was a “key organizer” for a protest against then-President George W. Bush: “In their search for allies, the organizers have embraced communists and their fellow travelers. A key organizer, Terra Lawson-Remer, who orchestrated the news conference, refused to disavow the involvement of Communist Party USA in what is billed as the ‘April 20th Mobilization’ to ‘Stop the War,’” Newsmax reported.

Shortly after 9/11, Lawson-Remer, the founder of Students Transforming and Resisting Corporations, was mentioned in an article in the Democratic Socialists of America-aligned magazine “The Nation” as working toward several goals, including “resistance to scapegoating of Muslims and Arab-Americans” in the wake of the attacks on the Twin Towers.

Later in her career, Lawson-Remer “served as a senior adviser at the U.S. Department of the Treasury during the Obama Administration,” according to her website. “She joined the Treasury while on leave from the [far-left] New School for Social Research, where she was assistant professor of international affairs.”

Read the rest of Trevor Loudon’s report HERE at The Epoch Times.

Daniel Greenfield: A Tiny Minority of Half a Million Jihadists

Katherine Daigle: What Is Life Like After "THE" California Firestorm?