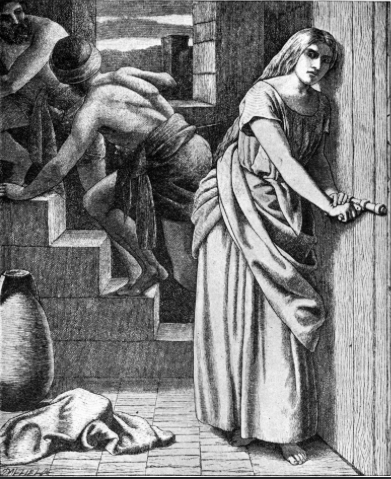 One of the arguments opponents of the Bible and Christianity like to make is that the God of the Old Testament was an angry/wrathful God. That’s an easy (and unfounded) accusation to make by those who don’t have much contextual knowledge of the bible. When I read through the Old Testament I see many examples of God’s love and grace extended to people. One of my favorite stories is that of Rahab in the book of Joshua chapters 2 and 6.

Rahab was an employee of what has been called “the oldest profession”. No, not politics. Prostitution (although the two seem to be intertwined together, don’t they)? She lived in the city of Jericho at the time of it’s imminent destruction from Israel as they took possession of the land God had promised them.

Joshua had sent spies to scout out Jericho and they came to Rahab’s families house and lodged there. The King of Jericho heard about this and demanded she release them. But Rahab hid them and told the King they had already left. She then made a deal that if she helped them escape then they would save her and her family when they destroyed Jericho.

14 “Our lives for your lives!” the men assured her. “If you don’t tell what we are doing, we will treat you kindly and faithfully when the Lord gives us the land.”

15 So she let them down by a rope through the window, for the house she lived in was part of the city wall. 16 She said to them, “Go to the hills so the pursuers will not find you. Hide yourselves there three days until they return, and then go on your way.”

17 Now the men had said to her, “This oath you made us swear will not be binding on us 18 unless, when we enter the land, you have tied this scarlet cord in the window through which you let us down, and unless you have brought your father and mother, your brothers and all your family into your house. 19 If any of them go outside your house into the street, their blood will be on their own heads; we will not be responsible. As for those who are in the house with you, their blood will be on our head if a hand is laid on them. 20 But if you tell what we are doing, we will be released from the oath you made us swear.”

So she sent them away, and they departed. And she tied the scarlet cord in the window.

In Joshua 6 we see the fulfillment of that commitment as Rahab’s family was saved by the same men who had spied on the city:

22 Joshua said to the two men who had spied out the land, “Go into the prostitute’s house and bring her out and all who belong to her, in accordance with your oath to her.” 23 So the young men who had done the spying went in and brought out Rahab, her father and mother, her brothers and sisters and all who belonged to her.

But the story doesn’t end there. And here’s where it gets fascinating and we realize WHY God protected and saved her. In the genealogy of Jesus in Matthew 1 we read this:

1 This is the genealogy[a] of Jesus the Messiah[b] the son of David, the son of Abraham:

2 Abraham was the father of Isaac,

Isaac the father of Jacob,

Jacob the father of Judah and his brothers,

3 Judah the father of Perez and Zerah, whose mother was Tamar,

Perez the father of Hezron,

Hezron the father of Ram,

4 Ram the father of Amminadab,

Amminadab the father of Nahshon,

Nahshon the father of Salmon,

5 Salmon the father of Boaz, whose mother was Rahab,

Boaz the father of Obed, whose mother was Ruth,

Obed the father of Jesse,

6 and Jesse the father of King David.

So Rahab was the great-great-great grandmother of King David! I don’t know about you but that gives me chill bumps.

And Rahab is listed in the heroes of faith in Hebrews 11:

31 By faith the prostitute Rahab, because she welcomed the spies, was not killed with those who were disobedient.

There are several applications we can take away from this story:

The lyrics to one of my favorite songs (The Scarlet Cord by Southern Raised) sums up the story of Rahab’s salvation – and ours:

To Rahab’s house that day

And it would stand as a picture

Of the price our Lord would pay

If you’re looking for a way out

From the judgement that awaits

The Scarlet Cord of Jesus’ blood

Is the only way

Muslim Murders Sister But He Is "Untouchable"