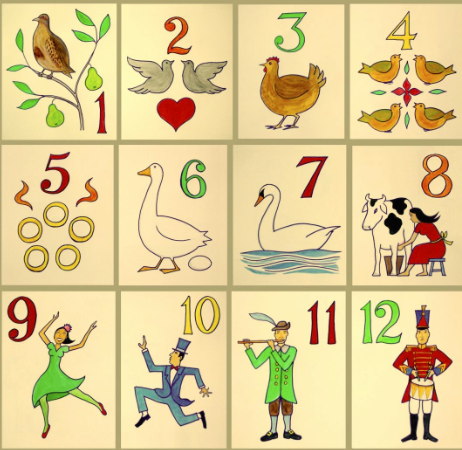 Back in 16th century, Catholics were persecuted to the point of death just for practicing their religion.  (Sound familiar?) The traditional carol “The Twelve Days of Christmas” originated as a secret, politically correct teaching mnemonic that could be sung publicly to remind Catholics of the doctrinal elements of their Faith.

Here are the catechetical meanings behind “The Twelve Days of Christmas”:

9 Drummers Drumming = the nine heavenly choirs of angels or the Nine Fruits of the Holy Spirit;

7 Swans A-Swimming = the Seven Sacraments of the Catholic Faith;

6 Geese A-Laying = Six Commandments of the Church or the six days of Creation;

5 Golden Rings = the first Five Books of Old Testament, the Pentateuch, also known as the Torah, telling of man’s fall from grace;

3 French Hens = the Three Persons of the Trinity, God the Father, Jesus the Son, and the Holy Spirit; alternatively, the Three Theological Virtues of Faith Hope and Charity, or the gifts borne by the Magi to the Christ Child of Gold (indicating royalty), Frankincense (indicating divinity) and Myrrh (a costly burial perfume prefiguring Jesus’ death);

2 Turtle Doves = the dual natures of Jesus — His Divinity and His Humanity, or alternatively the two parts comprising the Bible, the Old and New Testaments;

and A Partridge in a Pear Tree = Jesus Himself on the tree, the symbol of the Cross.

Finally, “My true love”  = God and “me” is the individual singing the song.

Daniel Greenfield: 20 Years of Muslim Terror in the "Capital of Christmas"