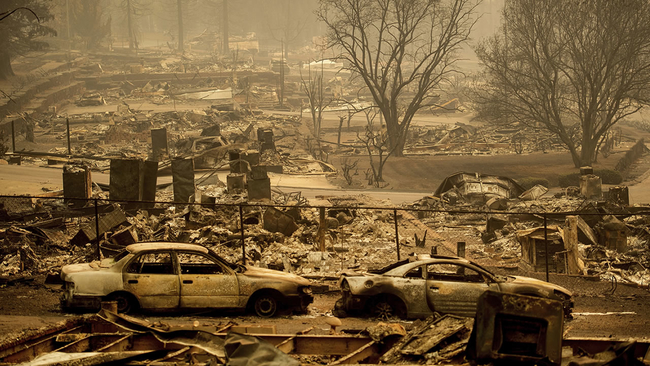 By the mercy of God and the heroism of state response teams, it is now mostly contained, but this year has seen the worst eruption of destructive forest wildfires in California’s history.

Countless who fled the fires found themselves stuck on traffic-clogged roads. There was only one way out for residents fleeing the fire, the four-lane, a supposed detailed plan, with people hoping to make  emergency evacuations swift and orderly. But like many California communities, especially those near forests and wooded areas, they were extremely vulnerable. Tree-lined streets in cities and towns swiftly became tunnels of fire, all blocked by fallen power lines, burning timber, and lots of cars. Thousands of frantic residents were encircled by choking dense smoke and swirling embers, as most vehicles ran out of gas and became abandoned, part of the existing problem. Fire crews struggled and first responders tried to reach these communities. They brought in giant earth movers just to plow a path through the abandoned vehicles, ravaged dead trees and blowing underbrush which was now more fuel for the fire.

It is a problem that has been getting steadily worse since 2011: A poorly extinguished campfire, a cigarette butt carelessly tossed out a car window, or a bolt of lightning starts a small blaze somewhere in the heavily dense woods that spreads far and wide, causing immense environmental damage and catastrophic loss of human and animal life.

However, it has never been this bad before.

While media coverage has focused on the disruption to celebrities’ s lives in Los Angeles, the truth is that in the recent inferno, we have confirmation of 80 human deaths, the number of people listed as missing after Northern California’s catastrophic wildfire were in the hundreds but over the weeks has been whittled down to under 50. In addition, when it comes to impact on the environment, it’s currently estimated that some 120 million trees have burned along with homes of those less fortunate to be able to recover, most are in make shift tents in a Walmart shopping center or on the very streets they used to live on .

Meanwhile, our great state’s outgoing Democrat Governor  has done little or nothing over the years to address this crisis, demanding that Californians are to blame for our droughts, wildfires and “extreme weather conditions,” and that climate change is an existential threat to Californians’ way of life.

In 2017,  California residents were burned out of their communities, homes, neighborhoods, schools, hospitals and businesses, while Jerry Brown was  jetting around the world spouting off about climate change propaganda, and calling the fires California’s “new normal.” Gov. Brown had many chances to sincerely and realistically address California’s increasing wildfires since his election in 2011, but instead chose to play politics, placing his new friends at the United Nations over the people of California.

In September 2016, Governor Brown vetoed SB 1463, a bill in the California legislature which would have required the California Public Utilities Commission to prioritize areas at increased risk from overhead wires in their management of wildfires.

Perhaps the most unforgivable is that Gov. Brown has not protected the public or their communities, and neighborhoods the promise to safeguard against these wildfires. Brown’s “new normal”, or more stylishly, our “new abnormal”, is blaming the effects of climate change for warmer temperatures and thus more fires. Scientists will tell you to exhaustion that you can never point to any single weather or climatological event as descending directly from global warming, so the claim is debatable, but either way California’s outgoing Governor point is that this is going to keep happening and getting worse. Californians all may as well just sit around on our behinds blaming ourselves. After all, his logic seems to go, there is certainly nothing we can do to actually safeguard against these fires.

Personally, I prefer a more optimistic viewpoint, as does Donald Trump. Our President has received a lot of hate in the media lately (but then, when does he not?) for suggesting that state authorities and their mismanagement of California’s forests are at least partly to blame for the fact that large swaths of  forests these people were supposed to be looking after have recently burned to the ground. However, he is right. Because contrary to what our own Governor would have us believe, there are actions we can take to protect ourselves, and the state officials we pay to take care of that sort of thing for us haven’t been doing a very good job.

President Trump points to Finland as an example of responsible woodland management. That European nation is heavily forested, yet somehow, their incidence of wildfire is only a tiny fraction of what we see in California. The “somehow” is simple: The Finnish take forest fires very seriously, and they are always on top of the problem. They remove dead trees and other dry, dangerous undergrowth from the wilderness, robbing any potential fire of fuel. They have built an extensive network of roads through their woods, ensuring that First Responder’s can quickly and efficiently reach a minor burn and put it out before it turns into an inferno. Moreover, they utilize some especially clever strategies too, such as paying Finnish aviation clubs to fly planes over the forests, making it virtually certain that new fires will be detected before they have time to become disasters.

All of these are sound, common sense solutions that could be implemented in California, and would almost certainly cut down on the fire-related nightmares we’ve been experiencing for the past several years. Any responsible leader entrusted with protecting his state and the people who live within it, should be looking into such methods and evaluating them for immediate deployment. But, hey, throwing your hands up in the air, saying it is hopeless and only going to get worse, and doing nothing? I guess that’s another way to go.