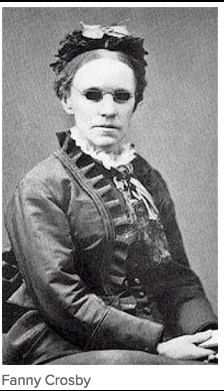 The title “Hymn Queen” was given the writer of over 8,000 famous hymns in the 1800s. Francis Jane Crosby, soon to be known as Fanny Crosby, is a name that may not be familiar to most Christians today, however her songs are still heard in churches. Classics such as Blessed Assurance, All The Way My Savior Leads me, To God Be The Glory, Pass Me Not O Gentle Savior, Redeemed, Safe In The Arms Of Jesus and many more.

What stands out so much is not just her brilliance that was recognized by poet William Cullen Bryant and five American presidents, it was the fact that she was blind from early childhood. An inept doctor prescribed a wrong medicine for an eye infection that led to an incurable blindness. None the less her heart could sense things clearly and her Christian parents made it a point for her to be involved in as many activities as possible. Even as a preschooler she loved and created poems.

Born in rural New York it was realized that a regular education would not work for her. In New York City there was a new school with a new approach, the Institute for the Blind. There she excelled and was such an example that she was invited to speak to the United States Congress. This would be the first of three such appearances before Congress during which she advocated support for such schools as she was attending. By the time Fanny Crosby was twenty her poetry was being published in local newspapers and magazines. 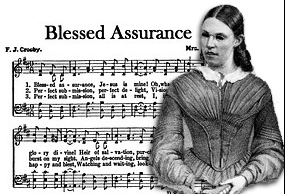 What may also surprise many who follow her life is that she was in her forties before she began hymn writing. Though raised a Christian, there were things in her life including tragedies that led her to realize she had a mission. Fanny recalled an admonition by a former teacher “Remember that whatever talent you possess belongs wholly to God and that you ought to give him credit for all you do.”

Fanny did make changes in that she devoted her life to writing hymn after hymn that were used in churches and evangelistic tent meetings. Her music was so often published that editors had to have her use assumed names in hymn books lest her real name would be seen too often. Hymn writing alone was not her only ministry. New Yorkers grew used to seeing this blind woman on a cane walking the streets to help the poor and visiting prisons.

Fanny Crosby was also an extremely patriotic person who during the American Civil War wrote hymns pertaining to the nation’s needs. One story is told how as an elderly woman in the early 20th century she was in a restaurant and heard some so called avant guard university students criticizing the American way of life. Blindness did not stop her from going to the table and slamming her cane down asking how dare they could disparage their rights and liberties. This was followed by a lecture this writer is sure they never would forget.

The point of this article is not to dwell only upon this remarkable woman’s past, but how her influence has reached into the 21st Century. Fanny’s story has touched the life of an American actress, Laurie Prange who is making it her mission to not let us forget the loving Christian spirit that made Fanny Crosby a true warrior for God.

Laurie is an established actress who appeared in numerous TV shows, including Gunsmoke, The Waltons, Highway to Heaven, The Fourth Wiseman, Kung Fu, How the West Was Won, and two 2 part specials for The Incredible Hulk.

Born and raised in a Christian home and married to a Christian, singer/songwriter Richard Lyons, Laurie has always been touched by the old hymns she grew up with. For years she has found her spirit drawn to Fanny Crosby’s life  journey, and knew there was a story to be shared…….a story that could be an evangelical call for Christians to use their faith and God given gifts to make a difference. 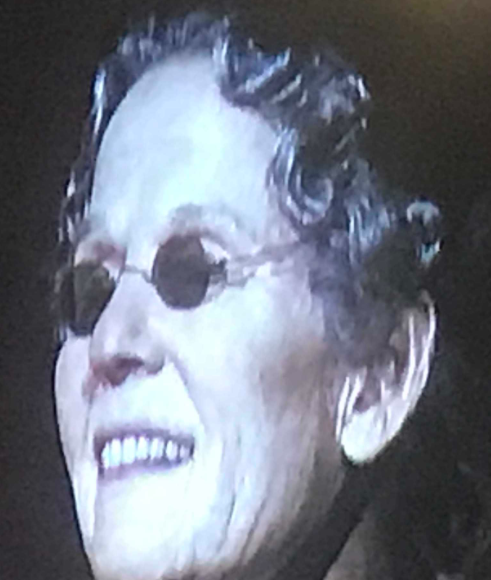 Recently, Laurie was encouraged to run a special eight minute film of clips she had edited together from a documentary drama titled: Into The Light at a Media Convention in Virginia.  This project, filmed years ago, had stalled, and was in danger of never being completed.

Those eight minutes were so powerful that there was a demand for a second showing during the convention.  Something you do not normally see in media events happened here.  People were inspired to talk about their faith and there were reported prayer groups. Local visiting pastors and others seeing that short film made it a point to encourage Laurie Prange to complete the project, offering to help promote it.

What is amazing is how the life of a blind little girl, who lived nearly two hundred years ago, would be used by God to not only reach millions at the time, but to extend through the years to the present.

Higher Pay for Congressional Staff? Not Without Other Changes!

Can There Be “Peace on Earth”?