What if everything you knew about Russian election trolling was a lie?

That’s the problem faced by two Senate Intelligence Commission reports commissioned from two outside organizations which struggle with the problem of reconciling the facts about Russian election trolling with upholding the Clinton campaign’s conspiracy theory about Trump and the Russians.

The two reports, from New Knowledge and Oxford University’s Computational Propaganda Project, about Russian disinformation serve as their own disinformation campaign, pushing the same false claims that the Russians had sought to help Trump win, even when they were working against him.

New Knowledge is a purely partisan source and its involvement in a false flag operation to fake Russian support for Roy Moore’s Senate campaign should disqualify it from ever being taken seriously. Its report amplifies echo chamber conspiracies about Trump, while Oxford University’s Computational Propaganda Project report is the adult in the room, occasionally conceding the more nuanced reality of the Russian campaign by noting that peak Russian propaganda volume actually occurred long after the election during the Syria missile strike: a key national interest area for Russia. It also confirms what Facebook has already told us, that Russian activity actually increased after the election.

That suggests an influence operation rather than election interference. 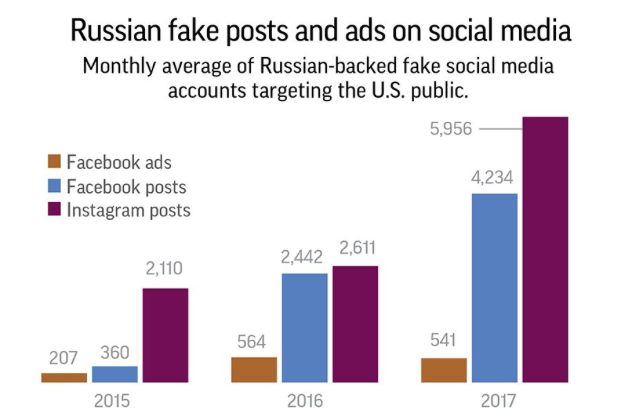 It also reveals that the Russians bought over 1,000 ads targeting African-Americans and less than 300 targeting conservatives. There were 81 social justice ads and only 24 patriotism ads, 66 pro-gun ads and 70 LGBT ads, 43 veteran ads and 57 Muslim ads, not to mention 143 Latin American culture ads.

So the actual story of Russia’s Facebook operations is that they targeted African-Americans and even Latinos more than conservatives. That would be entirely in line with Russia’s past propaganda, and its influence operations in the United States, but it doesn’t fit the Clinton conspiracy theory.

That doesn’t fit the narrative, so it’s dismissed as confusing.

When Russia posted pro-Trump material, it’s touted as proof of Russian backing. But when the Russians supported Bernie Sanders, Justin Trudeau or other leftists, suddenly “it’s not what it looks like.”

But if the Russians had set out to influence elections in swing states (a popular lefty conspiracy theory) they were doing a particularly terrible job of it since 152 ads targeted New Yorkers, 127 ads were aimed at Texans, 75 at Californians and only 42 at people in Florida. Pennsylvanians were neglected with only 25 ads while Georgians were barraged with 119 ads.

The Russians gave Iowa the cold shoulder, with only 1 ad, while throwing 6 ads at Alaska.

Missouri was barraged with the most ads, but that seemed to have a lot more to do with Russia’s African-American outreach than an election strategy. This wasn’t a strategy to influence key swing states since the Russians targeted or neglected states for reasons having very little to do with their status.

Just ask Nevada and Colorado, both of which were ignored, while Louisiana was bombarded.

Meanwhile on Twitter, “Right and left activity levels tracked closely together, at almost even levels, until early 2017. By the middle of 2017, there was a marked surge of activity focused on conservatives.”

The Oxford report may be more nuanced, but ultimately, like the New Knowledge report, it exists to service a Clinton campaign conspiracy theory denying the legitimacy of the election.

But it’s vastly better than the New Knowledge report. That’s not surprising considering the source.

New Knowledge claims that it was inspired to set up shop by ISIS and Gamergate. The bizarre equation of Islamic beheading videos and protests by gamers against unethical behavior by gaming journalists neatly sums up its radical slant.

When NK’s CEO Jonathon Morgan talks about “extremists”, he means Republicans. “Radicalization didn’t start on mainstream platforms like Twitter and Facebook. It was festering for years in spaces you never think about, like the comments section of Breitbart.” He tweeted.

Raina Kumra, a director at the Omidyar Network, writes that she led “investments” in, among others, Data for Democracy. And on Twitter, DFD thanked the Omidyar Network for its “continued support”. The Omidyar Network’s most famous product is The Intercept, a pro-terrorist site which has justified anti-Semitic violence by Islamic terrorists and which famously served as a platform for Edward Snowden.

Morgan’s past also includes time at the famously Qatari-funded Brookings. And The Intercept has also allegedly served as a clearinghouse for Qatari election tampering and propaganda. The next vectors for the Russia conspiracy theory have been Saudi Arabia, Israel and the UAE: all enemies of Qatar.

The Senate Intelligence Committee hired a firm which appears to have received funding from a deeply partisan source that was used to aid Russia’s biggest intelligence coup against America in a generation to analyze a Russian disinformation campaign. This may be their worst decision since hiring James Wolfe.

And NK’s leadership uses the phantom menace of Russian propaganda to call for internet censorship.

When Facebook leadership attempted to investigate a campaign funded by George Soros, a notoriously anti-Semitic leftist billionaire, NK’s Morgan tweeted, “Facebook and the other social media companies should not be trusted to police themselves. The self-serving attempts to undermine the credibility of those holding these companies accountable are reprehensible.”

The core message of censorship had already been put out last year by NK’s Director of Research Renee DiResta in a piece titled, “Why Facebook and Twitter Can’t Be Trusted to Police Themselves”. Social media companies, she insisted, must ensure that their users see “authentic information”.

People, in DiResta’s worldview, are passive consumers of information or misinformation who must be protected for their own good from the consequences of an open marketplace of ideas on social media.

She proposes an “independent government agency” that would regulate the “marketplace of ideas”.

The Oxford report is more subtle, but finds its way to the same place. “We need to develop stronger rules and norms for the use of social media,” it insists. “We cannot wait for national courts to address the technicalities of infractions.”

These arguments, equating government responsibility to oversee financial transactions with a responsibility to monitor the legitimacy of ideas, to protect people from malfunctioning consumer products and protect them from dangerous ideas, are deeply disturbing false analogies.

“Democracy is predicated on an informed electorate,” DiResta told CNN. “Things like misinformation, radicalization, pushing people into conspiratorial groups and then profiting from that because it drives engagement, that’s just not a viable state for the information ecosystem to be in.”

But who decides what’s information and what’s misinformation?

There are two possible answers. Individuals can decide these things for themselves. Or some central agency, corporation, regulatory body, or media echo chamber can be put in charge of deciding them.

NK’s report pushes the conspiracy theory that Russia was backing Trump. It reconciles Russian engagement with leftists as part of its pro-Trump agenda. This is a classic example of a conspiracy theory in that it treats contradictory information as affirming, rather than contradicting, its central thesis by revealing a deeper level of the conspiracy.

Conspiracy theorists begin with a central truth that is fundamental to their worldview, in this case, the illegitimacy of Trump. All new data, no matter how contradictory, is used to support that truth.

Morgan and DiResta keep calling for transparency, but New Knowledge doesn’t list its clients and Data for Democracy doesn’t list its donors. The same people who keep claiming that our elections are being influenced won’t say who’s influencing them. In the nebulous environment of the internet, we are told to distrust everyone and everything, except the people feeding national distrust at the highest levels.

In a free society, everyone gets to decide what is information and misinformation. Truth isn’t determined by spurious scientism nor is debate silenced with dark murmurs about foreign interests.

The Russia conspiracy crowd tells us that we have to “protect our democracy” through censorship. Censorship doesn’t protect democracy. Just ask the people living in any dictatorship. Including Russia.

Only totalitarian movements believe that people need to be “protected” from different views.

The Russians set out to divide Americans by sowing mistrust in our institutions. A conspiracy theory pushed by a Russian intelligence source to a British ex-intel agent hired by the Clinton campaign to manufacture opposition research against Trump, that was then circulated by Clinton allies in the media and government to justify everything from eavesdropping on Trump allies to questioning the legitimacy of the election, allowed Moscow to succeed beyond its wildest expectations.

Our politics now inhabits a vast media echo chamber in which paranoid conspiracy theories advanced by special interests are used to justify the destruction of democracy and free speech on the internet.

The new war against disinformation is based on disinformation. Its strategy for winning isn’t truth, but censorship. Every populist movement from America to Europe to Asia that the Left disapproves of is immediately blamed on a Russian conspiracy enabled by an unregulated social media.

The past two years have produced a bumper crop of fake patriots warning that the only way to defeat Russian “fake news” and “protect our democracy” is to put them in charge of censoring the internet.

The best way to “protect our democracy” is with free speech. A genuinely free press creates trust by enabling debate. The media oligarchy that we have now creates mistrust and a perfect breeding ground for conspiracy theories and fake news, because of its abusive power and disregard for the truth.

Censoring the internet won’t make Americans more likely to trust the media. Like the Russians in the Soviet Union, they will instead believe that whatever the media reports, the opposite is true.

The Russians can’t destroy America. Only Americans can do that.

It Is the Federal Government's Duty to Stop California

Michelle Obama: Elitism At Its Finest, Hypocrisy At Its Worst on Jimmy Fallon Show