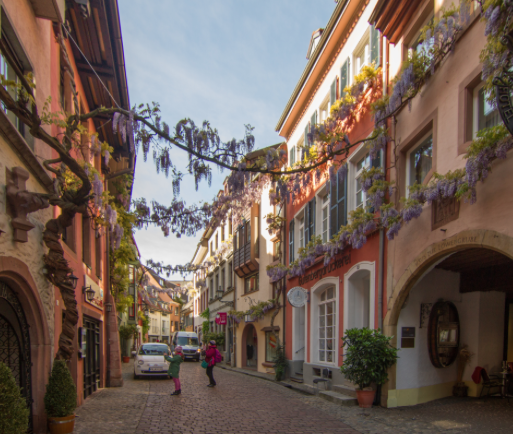 That’s how many crimes one single Syrian migrant had allegedly committed since entering Germany four years ago. He had already been wanted for drug trafficking and had been investigated for a rape last year. And then he struck again, this time in a case that has once again torn apart a sleepy college town.

Even though foreigners are only a small percentage of the population, they commit 42% of the crimes.

These days, Freiburg is mainly known as a college town. One site describes it as the “sunniest and warmest city in Germany” with a “progressive mindset” and “a remarkable commitment to the environment”. The University of Freiburg’s 30,000 college students make the area a magnet for parties, clubs and eateries catering to the booming student population. And for those who prey on the students.

The medieval cobblestone streets of Freiburg bulging with bars aimed at college students had come to host a very different population as a mass of Syrians, Afghans, Iraqis and others claiming to be refugees poured into Germany. Facilities catering to refugees quickly popped up all over the sleepy college town.

Unaccompanied minors, migrants, many of them claiming to be underage when their actual ages ranged into the twenties and even the thirties poured into Freiburg. By November 2016, 577 of these ‘minors’ had showed up in Freiburg. And crime, drugs, theft and sexual assaults came traveling along with them.

Trouble had already been reported at the White Rabbit, a trendy club where sexual assaults by refugees have become routine. Reports even described men forcing their way into women’s bathroom stalls. A refugee reportedly attempted to assault a woman in the bathroom and the dance club soon announced that it would not allow asylum seekers inside. “This is not an easy thing to do but we see no other way as currently we are experiencing problems with refugees,” it said in a statement.

On New Year’s Eve of that year, the wave of refugee sexual assaults taking place across Germany, most notably in Cologne, reached Freiburg with two women being assaulted by seventeen men.

But none of that had any impact on the eagerness of the Freiburg establishment to continue welcoming in migrants. Even as the violence grew worse, Freiburg followed Merkel’s slogan, “Wir schaffen das” or “We’ll make it work.” Refugee violence was only a minor obstacle on the road to integration.

The University of Freiburg has a special refugee initiative, as do other educational institutions in the area. The City of Freiburg commissioned rapid prefabricated housing that could hold hundreds of refugees. It hasn’t asked any of the difficult questions about what those refugees will do in Freiburg.

The “progressive mindset” made Freiburg a very welcoming destination for Muslim migrants; and for the crime and violence that has come with the great migratory wave from the terrorlands.

In 2017, Syrians had committed 282 of crimes in Freiburg. The Turks were responsible for another 246, the Iraqis for 158, the Algerians for 141, the Afghans for 121, the Tunisians for 77, the Moroccans for 76, the Somalis for 69, and the Albanians tying the Pakistanis for 59 for a grand total of 1,288 crimes committed by immigrants from Muslim majority countries.

But those statistics also conceal the human cost of migration to Europe from Muslim countries.

In March, Hussein Khavari, an Afghan refugee, was sentenced to life in prison for the rape and murder of Maria Ladenburger, a 19-year-old med student volunteering for a refugee charity, in Freiburg. Khavari had already been sentenced to 10 years in prison in Greece after pushing a woman off a cliff. Then, even though evidence shows that he was in his thirties, the Greeks released him as a juvenile offender.

In October, 7 Syrian men were arrested in Freiburg for the gang rape of an 18-year-old woman. The assault, like many others, took place at a club. And, like a number of other assaults, rape drugs were involved. The female student had gone out to celebrate with a friend. Someone had slipped her a drink.

The first Syrian rapist assaulted the woman in the bushes. After he was done, he went into the club and called on his friends to join in.

The suspects include a Majid, an Ahmed, a Muhammad, a Munahad, an Alaa and a Jekar. Some of the Syrian men also allegedly had links to terrorist groups. A number had posted pictures of themselves brandishing guns on social media. The full number of attackers may be in the double digits.

The alleged rapists lived in refugee housing around Freiburg. They had previously come to the attention of the authorities for drugs, assaults and robberies. And still they weren’t deported.

One of the suspects is a refugee who had come to Germany in 2015 during the great migration.

Majid and another of the suspects had already been suspected of the rape of another 20-year-old woman in her home. And Majid had also been suspected of committing yet another sexual assault. He was also due to be arrested shortly for drug trafficking, but before the police could take him in, he struck again and destroyed a young woman’s life.

“In Freiburg, there is no room for criminals and such terrible crimes,” Mayor Martin Horn insisted.

But the evidence tells another story.

Sexual assaults have been rising in Freiburg with over 50% of the suspects listed as foreigners. The parties are slowing down. There are more bouncers than ever around the club. And fear is in the air.

Muslim migrants have turned a sleepy German college town, a place once known for having the most sunshine in Germany, for its Black Forest hikes and its nearness to France and Switzerland, into a place where college students are stalked by predatory refugees. The “sunniest place” in Germany has become a place of shadows, and its progressive mindset has turned a city of free people into hunted prey.