It wasn’t all that long ago that the nation watched transfixed in horror as fires tore apart California, destroying homes and claiming lives. In all the debates about global warming and forestry management, one singular cause of the fire was left unaddressed.

Last December, the 422-acre Skirball Fire that forced the evacuation of 700 homes and took 10 days to put out was started by illegal cooking in a homeless encampment. The Leo Baeck Temple in Bel-Air, which celebrates “social justice”, even sued Los Angeles (both city and county) over fire damage for ignoring multiple complaints about the homeless encampment and the fire hazard that it posed.

This November, the Los Angeles Zoo had to evacuate its animals over a fire in yet another homeless encampment. That fire not only endangered lives, but diverted resources from fighting the much more serious fires in Ventura County.

But instead of shutting down the encampments, Mayor Garcetti, who has done more to legalize and subsidize homelessness in Los Angeles than any of his predecessors, sent “outreach workers” from the expanding behemoth of the LA Homeless Services Agency to ask them to please move.

That worked about as well as expected.

Orange County Supervisor Todd Spitzer blasted Garcetti for condoning campfires and refusing to arrest “homeless firebugs” and “vagrants” because there weren’t enough “No Trespassing” signs. “It’s unclear to me how many signs Mayor Eric Garcetti thinks he would need to cover the Santa Monica Mountains behind Bel Air and the Getty Museum,” he angrily wrote.

Brush fires are just one of the wages of the legalization and subsidization of the homeless. And while these fires are spectacular, they are not the most dangerous consequence. 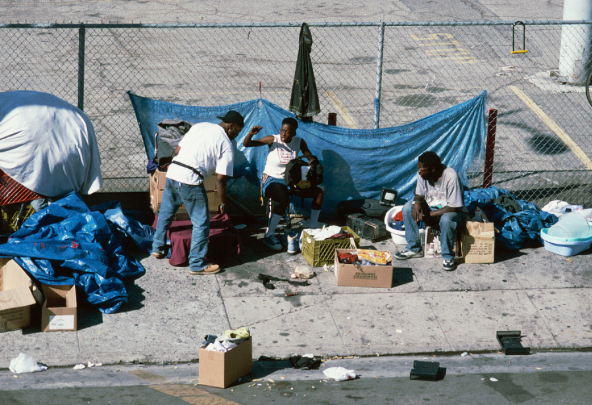 Los Angeles had doubled its homeless budget to $450 million. Despite that its homeless population had only dropped to 39,826, a reduction of only 256 people. The only surprise in those statistics is that the population dropped at all. Homeless spending has the notorious effect of increasing homeless populations rather than diminishing them as vagrants swarm in and agencies inflate their numbers.

But while doubling its homeless budget didn’t significantly diminish the homeless population in Los Angeles, it did have another spectacular statistical effect on the wellbeing of city residents.

Los Angeles had doubled its homeless budget and doubled the amount of homeless crime.

Homeless advocates like to claim that the police wrongly arrest the homeless for quality of life offenses that other people get a pass on. If ordinary people aren’t arrested for public urination or campfires, why should the homeless?

That argument fueled the legalization of homelessness which allowed vagrants to urinate and defecate in public, resulting in businesses fleeing the affected areas, and Hepatitis outbreaks among homeless populations in Los Angeles and other major California cities, and it also allowed them to start fires.

Several epidemics and fires later, not to mention an outbreak of shoplifting and tents being set up in residential areas and outside small businesses, the full scale of homeless legalization looks even worse.

It’s not just the “quality of life” offenses or broken windows policing whose accomplishments helped bring back American cities in the 90s, but which the pro-Crime progressives have been reversing.

And that’s not surprising.

Despite the echo chamber of public officials and media talking heads claiming that the homeless are just “ordinary folks” who are down on their luck, the most visible homeless population is the one that stays outside the shelter system, that aggressively camps in public areas and that is mentally ill.

Drive around Los Angeles for a few hours and you will quickly encounter Third World street scenes. Ragged men and women stomp down deserted streets, threatening, cursing and violently gesticulating in the air. Legions of schizophrenics hang out in even the most expensive areas having angry debates with unseen antagonists. And sometimes they take a break from fighting ghosts to punch passerby.

Talk to enough people and the anecdotal stories of being threatened, punched or otherwise assaulted by the homeless population pile up. Most of these assaults aren’t serious and aren’t reported to the police. But they have frightened residents and made them more willing to shovel money into a homeless services system that only encourages and enables the very problem they are hoping to end.

The real story of the homeless crisis is not about economics, it’s about mental illness. And the way it has played out is another demonstration of how leftist activism can manage to wreak havoc on a city, a state or a country on behalf of an incrementally tiny and dysfunctional population.

LAPD statistics show 8,906 crime reports among a homeless population which has been measured at 39,826 people. The crime rate per population in Los Angeles is a little over 3%. Among the homeless, it’s 22%.

Out of 4 million people, 39,826 homeless are responsible for 12.6% or one eight of aggravated assaults.

As it turns out, there is a 1% that is responsible for many of the problems. It’s just the other 1%.

It’s not the people who work harder, who achieve more and who produce more that are the problem. Nor is it the people who have fallen on hard times, but are still looking to get back on their feet.

It’s the people who are wrecking everything.

The greatest lie that leftists have ever told is that they seek to help the less fortunate. They don’t. If they are accidentally helped, that’s collateral assistance. Instead they elevate the most disruptive elements, economically, politically, socially and culturally, in order to wreck cities, states and countries.

Lefty activism insists that everything stop to help that 1% which can’t stop dealing drugs, complaining about microaggressions or urinating in doorways. It inflates their numbers, their suffering and their significance to prop up a narrative of an uncaring society that must be taken over and reformed.

The opposite is true.

It’s not that we care too little. We care too much. The Left took over by playing on that empathy.

Our empathy often overpowers our common sense. We do what feels good, rather than what is good. But our good deeds don’t lead to good outcomes. We legalize homelessness and Hepatitis outbreaks follow among the very people we tried to help. The more money we spend on the homeless, the more homeless there are. And then violence, crime and brush fires break out because we listened to the Left.

California’s homeless crisis is a tragic demonstration of a society losing its values and its sense. The Hepatitis outbreaks, violent assaults and brush fires are just symptoms of what happens when the 99% allow the 1% and its progressive protectors to get away with anything in the name of social justice.

A Shut Down? To Certain Members of Congress and Media: Please Shut Up!