Last year, 49ers linebacker Reuben Foster kneeled in disrespect to the national anthem. This year, he was arrested twice on domestic violence charges.

The anthem kneeler was arrested for the second time on Saturday, Nov 24, at the Grand Hyatt hotel in Tampa, Florida. He was charged with one count of first-degree misdemeanor domestic violence after allegedly slapping the phone out of his girlfriend’s hand, pushing her and then slapping her across the face.

Foster had been previously arrested for domestic violence against the same woman, earlier that year, in California. This time around, after multiple brushes with the law, the 49ers finally decided that they might be better off without him. And so the Redskins quickly swooped in to claim him.

Doug Williams, a former player and currently Redskin executive, dismissed Foster’s arrest as “small potatoes” before later being forced to apologize because of the outcry.

Williams had previously participated in an anthem protest last year. 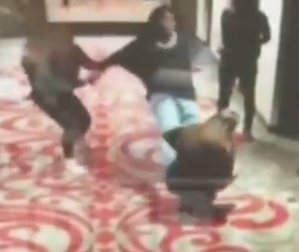 Foster’s domestic violence crisis occurred only a few days before a video showed Chiefs running back Kareem Hunt kicking and shoving a woman in his Cleveland apartment building. Another man claims to have been violently assaulted by Hunt in a Kansas City nightclub back in January.

TMZ described the video as showing Hunt attacking the woman. “As more people came into the hallway, Hunt had to be restrained several times as he made advances toward the woman and other people. At one point, he appeared to knock two people over with a shove, including the woman he initially shoved. At the end of the video, Hunt kicks the woman as she’s crouched on the ground.”

“It was just a long night,” Hunt told ESPN. “I could have took responsibility and made the right decision to find a way to de-escalate the situation.”

Even though the actual assault had happened back in February, the NFL had mostly ignored it.

Hunt, like Foster, had disrespected the anthem, by kneeling, explaining, “It’s kind of a bad situation going on right now. I really don’t like to talk about it much.”

Media hot takes quickly tried to contrast the players with Colin Kaepernick, Nike’s anti-American celeb, but Foster and Hunt were also anthem protesters. No team wants Kaepernick because of his mediocrity attitude toward any team that would have him. Defaming America is never the problem at the NFL.

NFL players joining in anti-police protest is natural because of the high rate of crime in the NFL. 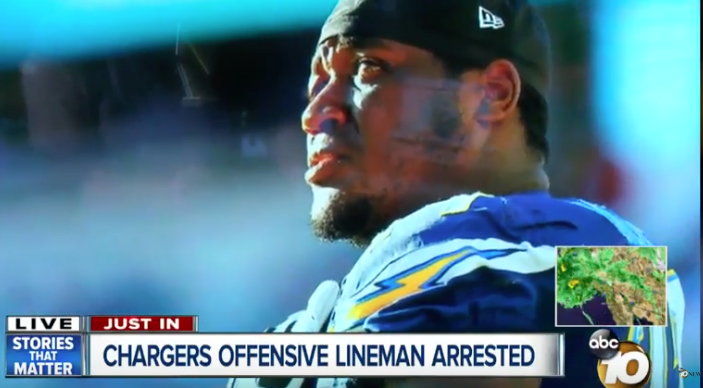 Foster and Hunt are only 2 of 33 players who were arrested this year on charges ranging from drug smuggling to drunk driving to assaulting the elderly to sexual assault. While Foster got the NFL’s War on Women started back in February, King Dunlap was also arrested that same month for violating a protective order put in place by his girlfriend of 12 years and the mother of his two children.

According to her complaint, Dunlap had ripped a bathroom door to shreds and then came out with a hammer. According to his lawyer, it was a misunderstood effort to reach a joint resolution.

Dunlap’s girlfriend had alleged that the 6-foot-8 football player had “put his hands around my throat, and had me pinned up against the wall with my feet dangling, screaming in my face”.

King Dunlap had participated in at least some of the anthem protests by raising his fist.

Adam Gotsis of the Broncos followed closely on Dunlap’s heels with an arrest for an alleged rape from his Georgia Tech days. Prosecutors eventually decided not to prosecute him. The year before, Gotsis had made headlines by being the only white player to join the anti-American protest of other Broncos players. 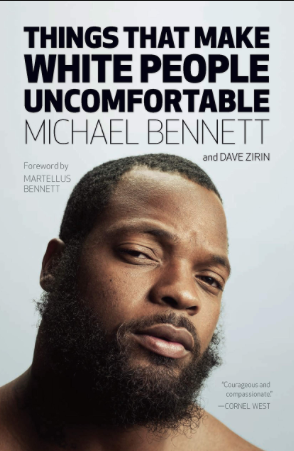 Michael Bennett, of the Seahawks and the Eagles, made Colin Kaepernick look like John Wayne and Martin Luther King. He not only sat out the anthem, declaring, “I’ll protest the anthem until we’re equal”, but even wrote a book titled, “Things That Make White People Uncomfortable.” The book was co-written with Dave Zirin, a white man who covers sports for The Nation and who had tweeted support for Marc Lamont Hill, after the former CNN commentator was let go for endorsing the murder of Jews.

He was arrested in March for an assault on an elderly black paraplegic woman.

The 6-foot-4, 274-pound football player allegedly shoved the 66-year-old woman and shouted at a police officer, “You all must know who I am and I can own this m***. I’m going down to the field, whether you like it or not.”

The woman, who was paralyzed from the waist down, suffered a shoulder injury.

Chief Acevedo, the first Hispanic man to head the Houston PD, also found Bennett’s actions very “uncomfortable”. “I’m grateful that a guy who decides to push a 66-year-old black female paraplegic little old woman that’s trying to make a living making a fraction of what he’s making not only did they have to put up with his verbal abuse but had to put up with his physical assault,” he said.

There’s no word on whether Bennett and Zirin are working on a sequel, “Things That Make Elderly Black Paraplegic Women Uncomfortable.”

And that’s how March wrapped up in the NFL.

“It’s time for the racism and bigotry, for those things to go away. Those things have no place in society, no place in America, no place in any country, and that’s my two cents,” Chris McCain of the Los Angeles Chargers had declared, when it came to the anthem protests.

It cost him more than two cents when he was charged in June for grabbing a woman’ neck and spitting on her. While McCain initially claimed the woman was lying, he pleaded no contest to two charges of battery in October.

The issue isn’t just that the NFL is filled with entitled criminals. That’s not news to anyone.

The anthem protests are not the outraged grievance of an oppressed minority, but of a 1% that, like Bennett, believes it should be able to get away with anything, without the police getting in the way.

But, as this tally in a year of the NFL’s War on Women shows, the victims of their violent entitlement are often women.

When the police are prevented from doing their jobs, it’s the most vulnerable who suffer the most.

And those vulnerable people are often black women.

The anthem protests are as much about domestic violence as they are about police brutality. For many NFL players, police brutality means anything that interferes with their right to start fights in bars, drive drunk, smuggle drugs and beat women. Especially their wives and girlfriends.

Emery McClendon: Celebrating Freedom in a Country That Seems to Be Throwing It Away