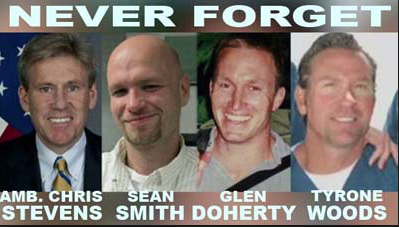 “The dead cannot cry out for justice. It is the duty of the living to do so for them.”

On November 17, 2018, I found out about a bill moving through the House floor that struck a personal resonance with me. It is H.R. 2315. It is sponsored by Congressman Stephen Lynch (D-MA 8) and was originally introduced on May 3, 2017. This bill seeks to posthumously honor the four victims of the Benghazi attacks, Ambassador Chris Stevens, Tyrone Woods, Glen Doherty and our nephew Sean Smith with the Congressional Gold Medal.

The Congressional Gold Medal is a high honor that has been bestowed on Americans as diverse as George Washington to George Gershwin. It is given to individuals that have made a mark in American history or culture.

I found out about H.R. 2315 from a dear friend of my mine, Lt. Col. Dennis B. Haney, USAF (Ret). Denny is a Vietnam era Jet Fighter Pilot, affectionately known as a United States Air Force Wild Weasel Pilot. I have known Denny for about five years when he and the folks at Special Operations Speaks were supporting the push by victim family members and fellow citizens who were seeking to establish an atmosphere of accountability about Benghazi. Denny is also a member of the Citizen’s Commission on Benghazi and the Citizen’s Commission on National Security, among many accomplishments. Denny is also a very true and wiser older brother by different parents.

So on the afternoon of November 17th, I left a message on Congressman Stephen Lynch’s voice mail. On the 19th, I received a message from the Congressman’s office asking me to call back. On the 20th, I spoke with one of his staff. To preserve their privacy, they shall remain nameless in the context of this article.

Speaking with one of Congressman Lynch’s staff members, on December 20th, I advised them that by perusing congress.gov I was aware that the bill currently had 250 co-sponsors. I told them that I thought that a bill normally would pass with 218 votes. They advised me that as the Financial Services Office of Congress struck and paid for Congressional Gold Medals, they required 290 co-sponsors. That equals three quarters of the House of Representatives. That actually is fine with me as it left no room for this to be politicized.

“In view of the recent sixth anniversary of the September 2012 terrorist attack on the U.S Consulate and classified annex in Benghazi, Libya, it is important that Congress recognize those brave individuals that sacrificed their lives to defend our great nation and its values. To this end, we have introduced bipartisan legislation, H.R. 2315, to posthumously award the Congressional Gold Medal to Ambassador J. Christopher Stevens, former Navy Seal Glen Doherty, former Navy Seal Tyrone Woods, and U.S. State Department Officer Sean Smith in recognition of their lifetime commitment to the safety and security of the American people.”

Congressman Lynch’s words are moving and I find his intent to be respectful with a sincere desire to offer tribute to the Benghazi victims. If only members of the previous administration had demonstrated that same commitment to the safety and security of all Americans deployed to foreign countries including the Benghazi Four and their Colleagues.

When I read the list of co-sponsors on this bill, I was amused and amazed. After all, some of the folks who signed on to H.R. 2315 were some of the same folks that called the Benghazi victim family members liars and worse. Individuals who compared Benghazi to a walking corpse and other statements too ridiculous to repeat here. I will not give the guilty any publicity by naming them here.

But whether one co-sponsors a bill out of guilt, over midnight worries about one’s legacy or doing the right thing, it makes no matter to me. After all, in the past six plus years, I first sought more knowledge about Benghazi, than sought accountability for those responsible for the murders. In my travels towards the truth I failed to consider the concept of honor for these four Americans. Without a doubt, Ambassador Stevens, Sean Smith, Glen Doherty and Tyrone Woods should be honored.

Keeping a keen eye on this bill I saw the count for this bill climb to 295 and finally to 298. With the recent passing of President George H.W. Bush and the approaching holidays, it seemed the bill might roll into 2019. Than on December 12, 2018, approaching that 11th cocktail hour, H.R. 2315 passed the House, unanimously, by a voice vote.

H.R. 2315 moved from the House to the Senate on December 13th. It has been assigned the Senate bill number, S.1906. I am praying that S.1906 moves efficiently through the Senate. It is past time to honor the Benghazi Four.

By the way, and I have written and spoken about this before, all public schools should teach their students how to navigate the congress.gov website. It can teach current and future generations how to pay attention to the workings of the legislative process. A focused attention is vital for the strength of our people, so that we can remain vigilant and continue to combat tyranny.

The tragedy of Benghazi must not be swept away with this recognition but the need for accountability and justice are illuminated by this bright point of light. Sometimes one small point of light can fully illuminate the darkness. Sometimes truth, and it’s close cousin justice, can make its presence known in the wake of that illumination. For myself and the other family members, may Almighty God engulf our world with the light of truth and justice. We have been on the path of justified suspicion for far too long. It is time for the illumination of accountability to be framed by the light of honor.