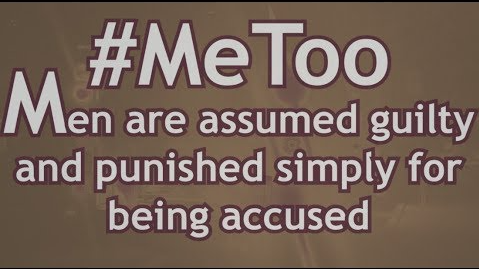 Before and since the public hearings over the nomination of Brett Kavanaugh, much has been in the news about the #metoo movement and the recent efforts by the Department of Education to overhaul the procedural recommendation for colleges and universities experiencing a report of sexual assault.

Among the issues being debated lately are the shortcomings of the Obama Administration guidelines on the handling of sexual assault cases on college and university campuses and the extremely lopsided deference to victims while being very lax with safeguards and due process rights of those accused. It almost appears as if the previous guidance was created by the leaders of the militant #metoo movement.

Now I am not suggesting that consideration should not be given to anyone who comes forward to report sexual misconduct. However, as was seen during the Kavanaugh hearings nothing good comes from a seriously slanted approach that does not also consider the rights of the accused when it comes to evidence, witnesses, cross-examination of accusers, etc.

Under Obama-era guidelines, victims were protected from ever having to answer questions posed by the accused person or his legal counsel. They were completely shielded from any question of their veracity or the circumstances surrounding the accusation.

Under the Trump administration’s proposed guidance, the accuser would be subject to questioning but in deference to the stress, fear, and intimidation concerns of victim advocates, the questioning could be done in a separate room from the accused and by someone other than the accused or his legal counsel.

While I can understand to some degree why these safeguards are in place, I cannot accept the fact that the revisions to the guidance are adequate to protect an accused person from the sort of dishonesty that was displayed in cases like the one that was brought against the Duke Lacrosse team several years ago. While that was not a case that was investigated by the college administration but was instead poorly handled by law enforcement and prosecutor, it was a perfect example of what can happen when both sides in such an adversarial proceeding are not given equal and honest treatment under an “innocent until proven guilty” framework.

Several things are seriously wrong with this entire subject. First among them is the fact that while called “guidance” by the Department of Education, the college or university is inviting repercussions if they do not follow the guidance. That immediately brings into question the fact that the Department of Education has no constitutional authority to exist or have any power over how a public or private college handles what happens on its campus. Neither does it truly have any legal basis for existing as a federal department. But we will leave that one to simmer for now. The reality is that this so-called guidance, whether new or old, falls far short of how any accusation of criminal conduct should be handled.

In a real and just world, there are two ways to go here. On a state-owned public college or university which has within its administration a law enforcement agency (sworn peace officers) such as a campus police force, that agency should treat such a reported offense in the same manner that any other sexual assault case would be handled had the incident been committed on a public street. It should be investigated, reports should be submitted to the prosecutor having jurisdiction over the campus location, and, if justified, a grand jury empaneled to determine if probable cause exists to bring an indictment against the alleged perpetrator. Just because it happens on a college campus (public or private) does not mean that it should be shielded from the criminal justice system.

In the case of a private college/university campus where sworn peace officers are not necessarily employed, the alleged crime should be reported to local law enforcement and they should be provided access to all witnesses, crime scene (if any can be identified), and the accused. They should handle the investigation from beginning to end and then proceed to submit the reports to the local prosecutor and/or grand jury.

What is happening on college campuses regarding criminal sexual misconduct (or any other criminal activity for that matter) should not be treated as a confidential matter that must be kept out of the public realm. If it happened on or off campus should not be a consideration.

What is happening is caused by a desire to hide such events from public view to shield the institution from bad press. This does nothing to aid the victim or see that the accused person’s rights are protected. After all, if there is a prosecutable case there, the identity of the victim and the accused will eventually become public as a matter of necessity. Too often, such situations are being handled by quietly expelling the accused and hiding the identity of the victim when there has been no professional investigation of the fact of the case. That provides neither party with the justice they deserve.

Can There Be “Peace on Earth”?