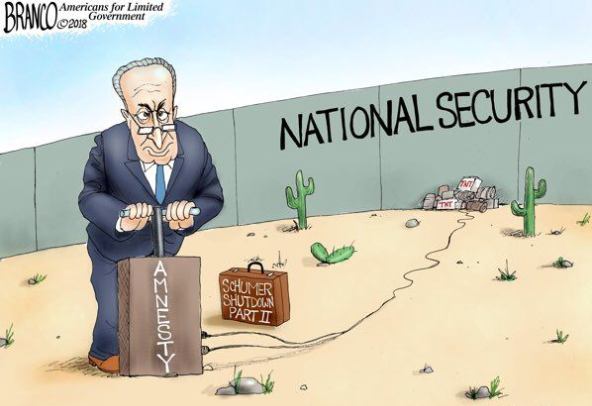 Unfortunately, I have been forced into addressing an issue I thought had been laid to rest. I have written in the past about media madness and the lack of intelligent discourse. Thought I was done with it, silly me. But the shrillness of key members of Congress and the American media is vastly disturbing to me. Therefore, there are no holds barred in this article. Let us discuss the current insanity gripping the aforementioned.

Let me speak first to the majority in the House of Representatives. Please be advised men and women of the House that winning a majority in a mid-term election is not an immediate guarantee for the passing of your mandate. It is time to stop behaving like some vastly overpaid Enfant Terrible. Grow up, you’re an embarrassment to the needs of the American people and an insult to the term bi-partisanship. Do not let the madness that you are embracing hinder the process of government. Again, do your job, do not let the desire to destroy President Trump and his agenda prohibit you from exercising Legislative responsibility.

While Pelosi vacations in luxury surrounded by armed security an illegal gang member guns down a young immigrant police officer.   Where is Pelosi and her gang of misfits outrage over the murder of this young immigrant? The blood of California Police Officer Corporal Ronil Singh is on your hands Nancy. Truly tragic that Singh immigrated legally from Fiji to this country. He was allegedly killed by an illegal alien, a gang member who is now in custody. Officer Singh leaves behind a wife and a five month old son who will never know his Father. Officer Singh was killed by an illegal alien who had been previously deported and who has a criminal record. Where is the outrage from Congress over something that is truly an outrage? Bottom line: Sanctuary Cities protect the criminal and not the hard working immigrant.

Ultimately, President Trump is trying to do something I have not seen in the previous twenty four years before Trump. Namely, he is keeping a campaign promise. In this case, to build a wall to limit the influx of illegal aliens and criminals and to stop the flow of drugs and human trafficking. I believe in welcoming any alien that has a sincere desire to contribute and to assimilate into our culture. I do not believe in welcoming criminals, rapists, gang members or worse into this country. It is also important to screen for contagious diseases. After all, we did that at Ellis Island. I also am supportive of President Trump’s desire to cut funding to other countries, like Honduras, who actively encourage their citizens to become lemming-like, refugee mobs.

The American people need to shut down the voice mail and e-mails of the members of Congress, like Pelosi and Schumer, who are unwilling to sit down at the negotiating table. Politics as usual is no longer a remotely tangible excuse, it is a disease and it is time for all of us to raise our voices in a unified search for an applied cure.

The American media is behaving like a true partner in crime to Pelosi and Schumer. There is no pretense of any demonstrative fairness to President Trump nor any fair reporting of any news related to the Trump agenda. When I hear the media state that Trump is a “criminal” who should be jailed I wonder where they were during the actual crimes of the previous administration? They were largely silent during Benghazi, Fast and Furious and the targeting of conservatives by the IRS, among other crimes.

It is our responsibility to not accept a third rate American media or a fourth rate Congress. I refuse to embrace mediocrity in our government or a mockingbird media.