For over a decade this writer has supported a film about the extraordinary heroism of Desmond Doss and the efforts of Gregory Crosby to have a film made. This was successfully done with Hacksaw Ridge which won two Academy Awards out of six nominations under the direction of Mel Gibson. It is a beautiful story of a man who would not violate his principles as a Christian and still became a hero who saved hundreds of lives in the Pacific Theater during World War Two. Still the question would come up about how did such a man become this way and now Gregory Crosby and Gene Church have answered this in their book The Birth of Hacksaw Ridge-How It All Began.

As one familiar with the area Desmond Doss grew up in and having many friends of the same faith as his, Seventh Day Adventist, it is understandable how such a hero could come from the mountains. He first became a part of this writer’s life when attending a Seventh Day Adventist School during the Korean War. The writer was a member of a team Doss  created after his service years, the Medical Cadet Corps. We were fully trained and ready to go and only the war’s end caused us to go on to college rather than Korea. 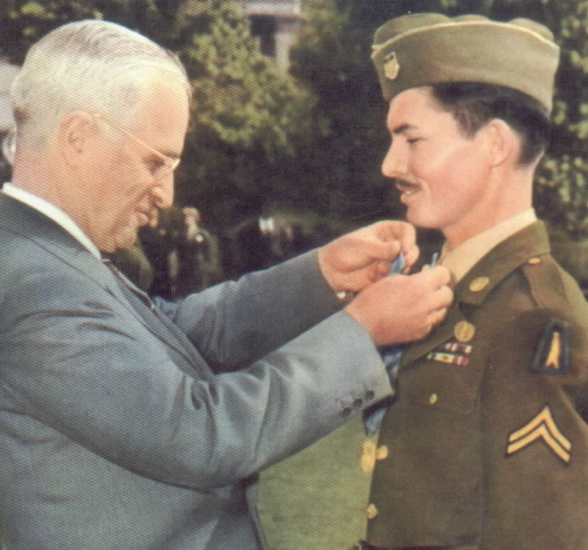 The book itself would make an exciting film as the scene is set when Desmond Doss is waiting in Washington, DC to receive the Congressional Medal of Honor from President Harry Truman. While waiting, Doss has flashbacks of memory going back to his childhood and here you see the making of the man.

Desmond’s story begins in Lynchburg, VA just an hour away from where this is being written. Though a small city, it is still easy to see how this child of the mountains was adventurous, almost a daredevil, while at the same time having a deep love for God. Visiting the area you can see the inspiration as years later another boy from the area named Earl Hamner would create The Waltons. The young Doss would endure many scrapes and hurts that could have taken his life, however he seemed to know God had a plan for him. As a Seventh Day Adventist he was an evangelical Christian who took the Bible as The Truth and that he must regularly study scripture and keep the Sabbath on Saturday.

This is also a great love story and there is information about the love of his life, Dorothy Schutte, who was a student at Shenandoah Valley Academy in New Market, VA . Here the writer can relate having been a day student there. The description of Dorothy’s upbringing and education is as riveting as Desmond’s. What may seem today as totally old fashioned is beautiful as no matter how close they became, there is no kissing as that is saved for marriage, only for “the one.”

Then comes the war at which time Desmond, originally a carpenter, works in a shipyard in Norfolk. Refusing to avoid the draft based on his needed profession or his religion he goes in as a medic. As also shown in the film his refusing to work on the Sabbath, his Bible reading,  being a vegetarian and his refusal to handle a gun brings him persecution and ridicule. He went through horrendous things in basic training that today are no longer allowed. Desmond overcomes this and becomes a real hero to all who know him. Also beautifully shown is his marriage to Dorothy and his use of the Bible she gives him.

The book has a follow up of events in Desmond’s life after the war and he remained a leader in programs that would benefit others, especially veterans. At the end of the book there is a set of interesting family pictures.

the softcover is at  https://www.adventistbookcenter.com/the-birth-of-hacksaw-ridge.html