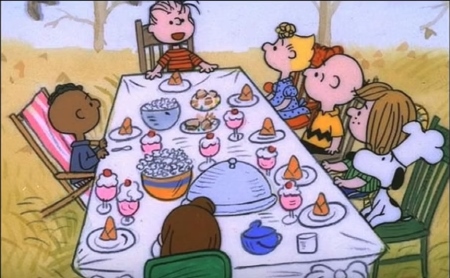 The left never stops attacking institutions and traditions. And one of their most often used methods is the racism card. So their latest attack, believe it or not, is to go after Charles Schultz’ Peanuts comic strip. Several people took to twitter recently to charge racism in the Charlie Brown Thanksgiving TV special. The show originally aired in 1973 so somehow we all missed this until these SJW’s “caught” it 45 years later.

One social media user watched the special, and took to Twitter to air her grievances. The user, Cynthia Haynes, wrote, “How come Franklin, Charlie Brown’s only black friend, sits alone on the other side of the table? And in a lawn chair.”

Another user, whose handle is “Vic Damone Jr.,” wrote, “Not watching Charlie Brown Thanksgiving anymore until they sit some people on the same side of the table as Franklin.”

‘Yessam’, another user, wrote, “Am I woke now, why is Franklin in Charlie Brown Thanksgiving sitting all by himself at the table. Man. Things that I did not notice as a child.”

“They give our friend the busted chair and won’t even sit on the same side of the table, more proof that Charlie Brown and his cohorts are RACIST,” slammed Twitter user @mwizzy128.

There were some defenders:

“Seriously please get some historical context. Charles M. Schultz was a trailblazer and bucked racism in those days by adding Franklin to reflect the issue… and challenging what was then going on in society,” tweeted California radio show host Mark Larson.

I wonder if it ever occurred to these folks that maybe Schultz was mocking the culture of the time in that scene. It wouldn’t have been the first time.

But let’s look at the historical context (because those making the accusation obviously don’t know it, or more likely, don’t care).

In 1968 a teacher named Harriet Glickman (who is Caucasian) wrote a letter to Schultz (and other comic strip writers) asking him to incorporate a black character into the Peanuts comic strip:

“I was a retired teacher at the time,” says Harriet Glickman, quick and elegantly articulate while speaking by phone Friday. She had taught outside Los Angeles, in Burbank, before turning to other careers while raising her three children.

It was April of 1968, and King had just been gunned down in Memphis. “I was thinking about Dr. King, and about having lived through so many years of struggles and the racism and the [divisiveness] that existed,” Glickman, now 88, tells me. Her parents had raised her in the Depression era with a strong social conscience. Now, “This was a culmination that was so painful that I needed to do something.

“So I decided to write.”

Because she had worked with kids, and had kids of her own, Glickman was especially aware of the power of comics among the young. “And my feeling at the time was that I realized that black kids and white kids never saw themselves [depicted] together in the classroom,” says Glickman, noting that Morrie Turner‘s diverse comic “Wee Pals” was still a budding feature. And so she wrote to several syndicated-strip cartoonists — from “Peanuts” to “Mary Worth” — with the idea of cartoon integration.

“Allen Saunders was very thoughtful, and he sent a long letter, and we communicated for quite a while,” Glickman says of the “Mary Worth” scripter. “He and [artist] Ken Ernst wanted to do something like that … But he was very afraid that the syndicate would drop him.”

Glickman also received a prompt reply from “Sparky” Schulz, from up the coast in the Bay Area. The “Peanuts” creator appreciated her point — “He liked the idea,” she says — but he also shared the reasons for his reservations, including whether he, as a white creator, could write a black character without unintended condescension.

Glickman decided to write back, and suggested that she could seek input from African American friends who were parents. “With his permission, I shared his letter,” she recalls. “Ken Kelly was an old friend and a father of two, and I also asked Monica Gunning.” Those two parents wrote Schulz themselves, urging the integration of “Peanuts.” A short time later, Glickman received a response from the cartoonist.

“Schulz said that he’d got the letters,” she recalls, “and that I’d be pleased with an upcoming ‘Peanuts’ story.”

That “story” appeared in Peanuts on July 31, 1968 when the character of Franklin was introduced as a new friend Charlie Brown met at the beach. In another nod to the issues of the day, Schultz wrote that Franklin’s father was in Vietnam. Franklin also appeared in the classroom with Peppermint Patty which reflected the ongoing desegregation of the times. Thanks to one woman’s concern, Franklin was “born” and continued to appear in Peanuts.

Schultz spoke years later of the opposition he faced in writing a black character into Peanuts:

I finally put Franklin in, and there was one strip where Charlie Brown and Franklin had been playing on the beach, and Franklin said, “Well, it’s been nice being with you, come on over to my house some time.” Again, they didn’t like that. Another editor protested once when Franklin was sitting in the same row of school desks with Peppermint Patty, and said, “We have enough trouble here in the South without you showing the kids together in school.” But I never paid any attention to those things, and I remember telling Larry at the time about Franklin — he wanted me to change it, and we talked about it for a long while on the phone, and I finally sighed and said, “Well, Larry, let’s put it this way: Either you print it just the way I draw it or I quit. How’s that?” So that’s the way that ended.

Schulz also held his ground when the network opposed having Linus recite Jesus’ birth from the Gospel of Luke. We know who won that battle. Schultz was also the first comic strip writer to include verses from the bible.

So back to the charges of racism. We are being asked to believe that the man who took a stand to include a black character in his strip at the possible cost of his career is then going to turn around and make a racist statement in his Thanksgiving special. What utter nonsense. But of course facts rarely matter to liberals who have to always find something to be offended at. Quick frankly I am offended at having my intelligence constantly insulted by these types of ridiculous accusations.

My guess is that this won’t end anytime soon. Eventually they will badger the ABC network not to air the special. It may take a year or two but they won’t care as long as these snowflakes no longer have to see it (turning the TV off not being an option of course). And once they succeed at that, they’ll go after the strip as a whole, demanding it be pulled from syndication. It didn’t take much to get the Dukes of Hazzard pulled a couple of years ago.

Radical liberals never stop – they just scream loud enough to frighten people into get their way. In other words, they’re bullies.

And just a warning for all of us that are fans of The Andy Griffith Show. They WILL eventually come after that show. I’m not sure what angle they will take but it will happen. A beloved show like that is too rich a target for them to avoid forever.