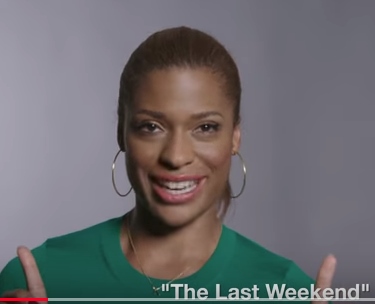 With the mid-term elections just around the corner, what would the final weekend be without the Hollywood left making a desperate push in their anti-Trump hysteria to take back the House and Senate. So in order to get the word out, they has graced us with another PSA. Actually TWO of them. Yayyyyyy!!!! There’s nothing I like better than a good PSA. If they would only make one. You know the old adage that there’s nothing certain in life except death and taxes? I think we can add Hollywood PSA’s to the list.

So the first one is an urgent call to get out and vote! They ask what concerns you the most and then rhetorically list possible concerns. In no certain order they list the following: Healthcare, Equal pay

Interesting list. Anybody notice something missing? How about the economy? You know it must be doing well if the left isn’t talking about it. In fact it is doing great! Unemployment is down to 3.7% and wages are increasing.

And Freedom of the Press? Who is taking that away? No one. What they mean is freedom from criticism. That mean old bully Trump calling them out on fake news. But gee wouldn’t criticism of the press fall under Freedom of Speech? Of course to the left you can speak your mind all you want as long as you agree with them. Stray off the plantation and see what happens (just ask Kanye West).

The only issue mentioned that is high on people’s list is immigration. But the left is on the losing side of this issue. Their call for open borders continues to be rejected, especially with this caravan headed for the border. And have you ever noticed that no one in the left is offering to let any of these folks into their gated houses and neighborhoods?

We now move to the second PSA which I will admit is much better than the first one. At least it’s somewhat entertaining and very illuminating as you can see from the transcript below:

Have you ever wanted to be an action movie hero? You know…the strapping guy who kicks in the door the last minute and says ‘Come with me if you wanna not die’. Or the lady space captain who’s like super -smart, also a super-model. Well guess what? You can be! The movie is called ‘The Last Weekend’. And unfortunately it is 100% happening in real life. We’re talking about the last weekend before the mid-term elections. And we need you, yes you, to be the hero. You can be the star of this real life hypothetical movie, but not so hypothetical because as we’ve established it’s happening.

Gee whiz who wrote this?

You can be the Rock. You can be Linda Hamilton in the Terminator messin’ up robots with your bare g***d*** hands.

Linda Hamilton? That’s a name I haven’t heard in a while. If she’s in the “movie” I might have to consider participating in it!

Anyway, moving on to the next incomprehensible rambling:

I mean we all are fighting bots. That really is kind of…that really isn’t…it’s too deep a metaphor. It cuts too close.

Huh??? Are they saying Hollywood liberals are bots? That would explain so much. Or maybe a more accurate analogy would be to the Borg collective.

You could be Tom Cruise where you’re doing that really fast run on set. Breathing through his nose, woooooo! And then running too fast, breaking his foot because he’s 50 years old and by God he’s a f***** man. That could be you!

A broken foot??? No thank you. And the “woooo” was weak. If you’re gonna do that then hire Ric Flair. Remind me again what this PSA is about?

You just have to volunteer. Knock on doors. Make phone calls. And remind people to vote.

Wait, I thought people were extremely angry at Trump and couldn’t wait to vote this fall. Why would they need prodding?

Volunteer on that last weekend. We need you. There really is just so much at stake. The opioid crisis. A woman’s right to choose. The Supreme F****** Court. Cause that went well. Did you know that that’s a lifetime appointment? Did you guys all know that that was a life, that’s forever.

Why yes we did because we know how our government works! I wonder if she knows there are 9 justices? The attempted destruction of Judge Kavanaugh is reason enough to vote Republican.

Right to choose? As long as it’s choosing abortion. Opioid crisis?? A tragedy for sure but not anywhere close to being an election issue.

Our government keeping children in cages. That is really happening.

Actually it happened more under Obama but that fact is lost on these uninformed leftists. And you support permanent separation of a baby from their mother in the womb. So no one takes you seriously on this issue.

Look, you were so good in the first part of the movie. You marched. You rallied. You texted friends in the middle of the night, “What the bleep is happening?”

They were good because it was organized. None of these protests were organic.

But now all the chips are down. And we’ve got to bring this baby home. So put on your tight white tank top, whip off your glasses and let your hair fall down out of that tight bun to reveal how hot you were all along.

So the left constantly rails against what they perceive as the stereotypical male sexual predator yet feed that perceived nature with blatant sexual imagery in this PSA. You couldn’t make this stuff up if you tried. And they expect people to take them seriously??? They are living in a fantasy world.

Do it! Just do it! Be the hero! Commit today to volunteering for the last weekend.

In light of the last statement what exactly does “volunteering” mean? Is this whole PSA like a casting couch? Just asking some logical questions here.

Not only have they created PSA’s they are hosting a telethon.

The two-hour “Telethon for America,” created by comedian Ben Gleib, will be streamed live starting at 9 p.m. ET on Monday on YouTube, Facebook Live and Comedy Central’s website. This telethon, unlike traditional ones, will not ask for money. Instead, viewers will be urged to call in to a celebrity phone bank and pledge to vote in the next day’s election.

The voter telethon is described as nonpartisan. It is backed by When We All Vote, a nonpartisan, nonprofit campaign launched by former first lady Michelle Obama to encourage voting.

Well of course it’s not-partisan. I mean Michele Obama is involved. C’mon now! And it’s hosted by those paragons of non-partisanship Amy Schumer and American traitor Jane Fonda. As one commenter asked “Are we pledging to vote in our election or Vietnam’s”?

Of course the snowflakes that watch this will call from the safety of their own room. As The Beach Boys might sing “There’s a world where I can go and call and pledge to vote. In my room, in my rooooooom”. But will they actually go outside to vote. It’s a scary world out there!

A final development is that Barbara Streisand has threatened to deport herself if the Republicans win:

I’ve been thinking about, do I want to move to Canada? I don’t know,” Barbra Streisand replied. “I’m just so saddened by this thing happening to our country. It’s making me fat. I hear what he said now, and I have to go eat pancakes now, and pancakes are very fattening.”

Yawn. Didn’t Babs say she was leaving in 2016 if Trump won? She obviously can’t be depended on to keep her word. And have you ever noticed how she (and others) never say they’re going to countries where other nationalities (i.e. non-white) live? It’s always where there are a lot of rich whites. Curious, curious. However, even if she does move, her new anti-Trump album “Walls” will still be available in case you were worried.

Let’s all follow the instructions in the PSA’s and go vote on Tuesday – for Republicans!