Last week, an Obama-appointed judge on the notoriously biased Ninth Circuit Court of Appeals issued a non-sensical ruling that flies in the face of existing laws. He ruled that the President’s decision to leave potential “asylum seekers” waiting at the gate for their case decision rather than allowing them to cross the border and wait within our country was unacceptable and that he had to allow anyone requesting asylum to enter the country (regardless of how they entered or where) while their case is heard.

The reaction of the President to this decision was predictable as he called out the judge for his left-wing bias and pointed out the fact that he was an “Obama judge.” 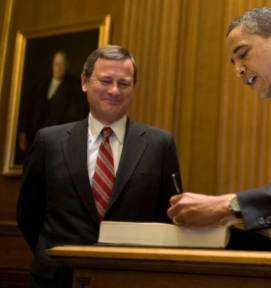 Soon after, Chief Justice John Roberts, in a rare public statement, weighed in by naively stating that there are no “Obama judges” or “Trump Judges” or “Bush Judges” or “Clinton judges” but rather only dedicated impartial and hard-working jurists that do their best to consider all sides in their decisions and rulings.

What is most disturbing about that statement is the fact that a Chief Justice of the Supreme Court of the United States is so completely out-of-touch with reality and the basic nature of mankind. It fails to recognize that man is a generally self-serving creature that will do many things that are, benevolently speaking, less-than-honorable when it is in their self-interest and the chances of being questioned are slim. The deterrent to the commission of such less-than-honorable things is the level of threat offered by the chances of getting caught in such acts.

But beyond the question of self-interest versus altruistic approaches to judicial responsibilities are some far more germane arguments that suggest that the Chief Justice’ view of his fellow judges is tinted by rose-colored glasses. Even in an ideal world, his actual quote is completely wrong-headed and likely part of the cause for his ridiculous gymnastics in ruling that the Affordable Care Act was constitutional.

Roberts’ actual quote reads as follows:  “What we have is an extraordinary group of dedicated judges doing their level best to do equal right to those appearing before them.” (emphasis added)

If a judicial official is doing his/her job in an appropriate and honorable manner, he would never make that statement (or at least the part that is bolded above). This statement places Roberts in the same camp as Justice Sotomayor who claims to bring a feminine and Hispanic viewpoint to jurisprudence. Her intent here was, evidently, to suggest that she would be sympathetic to the underdog and take their station in society into consideration when deciding cases before the court. From an “identity politics” standpoint this made her a left-wing champion of the little guy and the down-trodden. It did not, however, maker her a defender of the rule of law. Roberts’ statement suggests to me that he bases his decisions and considerations on the individual situation of the parties before him so as to decide whether the law is treating both parties in an equally favorable way. That is not the job of a judge and certainly not the job of a Chief Justice.

You see, depending on the facts of the case, one party or the other is in the position of having the burden of proving their case (usually the defendant/appellant that did not agree with the prior ruling being challenged) for a change in decision. This immediately eliminates the ability of a judge to use equality as a measuring stick for any decision. There are only two or three issues before any judge when hearing a case. Is the statute involved constitutionally sound; Is there enough evidence to prove that the defendant violated that law; and, in the case of an appeal, was there judicial error in the lower court’s hearing of the case or the prosecutor’s/claimant’s presentation of their case?

Nothing in these questions requires “equality” – only fidelity – to the law and judicial procedure once the determination has been made that the statute itself is constitutionally sound (which may or may not be at issue in any one case).

If justice is truly to be blind, then the judge has no way to know whether the parties are all dressed in $300 suits or whether one is dressed in rags…it is not a consideration. This is the major flaw in Roberts’ statement. Equality is an element in the constitutionality of a law, not in the decision process used to decide a case.

However, all that having been said, let’s return to his initial comment…that judges are all the same and it doesn’t matter who appointed them. If this were the case, the Ninth Circuit Court of Appeals would not have 79% of their cases overturned by the Supreme Court. There is an obvious bias to the decisions emanating from the left-coast circuit. Most of the judges currently sitting on that bench were appointed by Democrat (i.e., left-wing) Presidents. Does Roberts truly believe that Presidents Carter, Clinton, and Obama, used an ideologically blind selection process to choose their nominees for these appointments? What makes him think that judicial philosophy has no political element in its development?

The reality of the case that caused Roberts to break with his usual silence regarding public political squabbles is the fact that the judge making the ruling against President Trump does not agree with the President’s political approach to illegal immigration and border enforcement. It is apparent that he is sympathetic to the illegals who are, in his view, being thwarted in their attempt to exploit the very weak laws on asylum currently on the books. However, President Trump, by virtue of his office, has been gifted with a near complete authority to determine what level of immigration is “in the best interests of the United States” by the elected Congress. Statutory authority trumps political philosophy every time.

Thank goodness, the Chief Justice only gets one vote in such matters when they reach the Supreme Court. We can only pray that he keeps a clear head about him when this Ninth Circuit case reaches his desk and that he considers the clear words and intent of the statute that applied in the case. Nothing else should matter; not the conditions experienced by those left stranded at the border; not the country from which they claim to be fleeing; not their economic need to find work in America; not the fact that a previous President(s) chose to use a “catch and release” system to deal with the problem; nothing but the statute should be a consideration. The statute is clearly worded and without the slightest equivocation.

Chief Justice John Roberts should have just kept his mouth shut. He was only suspected of being a bit of an inconsistent fool before this. He just had to open his mouth to confirm it to everyone.

Every judge brings life experience and ideology to the bench with him (or her) every day. The level of integrity that the judge possesses determine how much that life experience and ideology influence the decision that are made while wearing the robe of justice. That is called judicial integrity. This is where the Ninth Circuit’s members seem to be challenged the most. Why else would all the leftist lawyers consistently choose the Ninth Circuit to challenge President Trump?