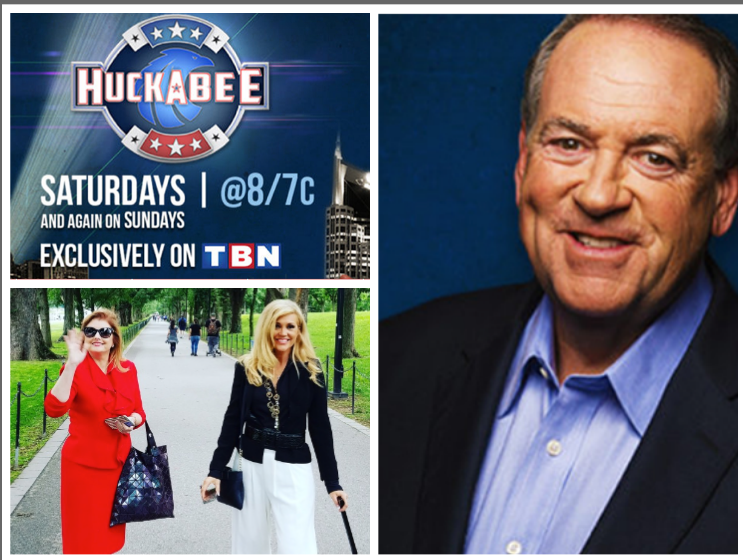 Watch PolitiChicks co-owners Ann-Marie Murrell and Morgan Brittany as they appear in-studio with Governor Mike Huckabee on his show Huckabee this Saturday, November 3 on TBN. (The show reruns Sunday, November 4.)

This will be Morgan and Ann-Marie’s second appearance with Gov. Huckabee, the first being in 2014 when he had his FOX program. After interviewing Huckabee after the CNN presidential debates at the Reagan Library, Ann-Marie mentioned that if he didn’t win president and got another show someday they’d love to be back on with him. So that is what is happening now.  The Governor also endorsed their second book, PolitiChicks: A Clarion Call to Political Activism.

As for segment discussion, in addition to the November elections Ann-Marie and Morgan hope to talk about the upcoming changes they will be making to their website, PolitiChicks. After noticing major spiritual changes at events they’ve attended together this year–seeing people praying together, sharing testimony, and talking about God more than ever, they knew they needed to do something. They were seeing this not only at political events, but even at the recent Happy Trails Virginia Style western film festival. So with all of the violence surrounding politics, PolitiChicks is going to amp up their tagline, “Shining light on the darkness”. In addition to the usual political content, PolitiChicks will also heavily promote faith-based films, television shows, books, and projects via their website.

“Whoever originally made up the rule not to mix religion and politics did not have ‘good’ in mind,” says Ann-Marie. “In fact, I heavily suspect it was the devil,” she says with a smile.

Check your local listings for time and channel.