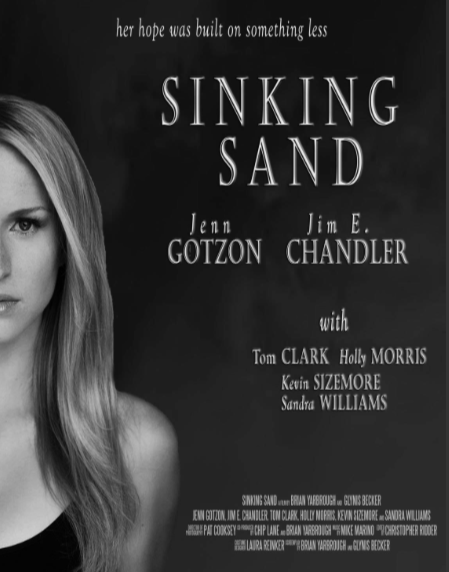 Sinking Sand is a film the Hallmark Channel program “Movies and Mysteries” should air as it is the type of theme they love to cover. The plot where a woman has to take over in a mystery as a detective either to protect herself or a friend.

The lead, Brooke McHenry, is portrayed by Jenn Gotzon-Chandler. Brooke  seems to have the perfect life as the wife of a successful district attorney Daniel, who appears to be on his way to being elected to the US Senate. However, Daniel’s campaign causes him to neglect his wife and she gets involved in a friend relationship with a stranger, Tyler Griffin, portrayed by Jim E. Chandler (Jenn’s real-life husband) . No romance, but she tells him too much which he records, alters and uses to blackmail her. It could damage her husband’s career so Brooke kills Tyler in self defense and then an innocent woman becomes a suspect. The task is to have the woman found innocent without Brooke giving herself away. No spoiler here as there is a big surprise ending.
This is  the type of plot Alfred Hitchcock was noted for.
Brooke is dramatically well done by Jenn Gotzon-Chandler and this is one film where her husband Jim E. Chandler  is not the romantic lead as he gives a chilling performance as Tyler. One performer with a small role also does an excellent job, Sandra Williams Ford as Mrs. Connors.  Mrs. Connors was a former victim of Tyler’s.  What is so compelling about this film is we have seen some similar things happening in Washington recently.   The threat of things being dug out of your past that can ruin your life, no matter how  long ago can be devastating,
The film was just recently released on DVD and can be found HERE on Amazon as well as Walmart.
Share
Facebook Twitter Pinterest Reddit Share via Email Print