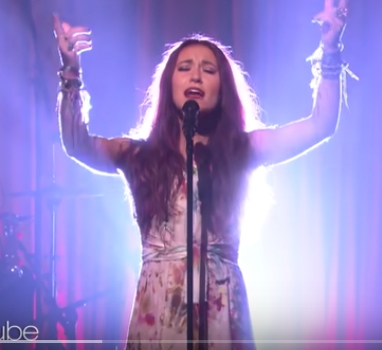 You would think the answer would be a clear cut “yes” but there are some who have criticized her for doing this:

One Twitter user wrote, “Are you gonna even talk about God with Ellen? Or just omit God like in your last CD? Your music is becoming less and less about God. I still love your voice though. I pray you stay true to the Word of God and not compromise to be in the World.”

Another simply wrote, “Shame on you!”

I really don’t understand this line of thinking. But it has been around for a long time. Even when our Lord and Savior walked the earth in human form, he was attacked by religious thinkers of the day:

Luke 15:1-2:Now the tax collectors and sinners were all gathering around to hear Jesus. 2 But the Pharisees and the teachers of the law muttered, “This man welcomes sinners and eats with them.”

12 On hearing this, Jesus said, “It is not the healthy who need a doctor, but the sick. 13 But go and learn what this means: ‘I desire mercy, not sacrifice.’[a] For I have not come to call the righteous, but sinners.”

Ouch! So the Pharisaic mindset continues to this day.

Jesus also said we were to take the gospel to the whole world, even to the utter ends of the earth. And it wasn’t a suggestion or a request that we could implement if the weather was fair and we felt like it. It’s a lifelong project. Lauren Daigle was not only following that command but doing so using the talent God gave her. The song she sang was about Jesus’ resurrection power based on Luke 24:2: “They found the stone rolled away from the tomb”. It is a wonderful song and it’s obvious who she is talking about (even most non-believers would know this):

Out of the shadows

Bound for the gallows

I thought it was over

An answer to prayer

The voice of a Savior

All at once I came alive

This beating heart, these open eyes

The darkness should have known

Now that You saved me

I sing ’cause You gave me

A song of revival

I put it on vinyl

I once was blinded

But now I see it

I heard about the power

And now I believe it

All at once I came alive

And consider that it was performed to what was likely an audience of folks who were unsaved and probably don’t go to church very often, if at all. Yet for a few minutes church is what they got and the song was the sermon. For many the message may have been lost just like it was in Jesus’ day. But there may also have been someone who’s life and eternal destination was changed (especially in the audience of millions who were watching on TV). At the very least Lauren planted a seed. I also read that Ellen gave a free copy of Lauren’s CD to all audience members. So it wasn’t a one time thing. Isn’t it amazing how God works? I applaud Lauren Daigle for the courage to do this. And I also have to applaud Ellen as well. She has taken some heat from her base audience too. God was using BOTH of them to send forth the gospel. And who knows? The message may have resounded with her. We can certainly pray for that end. She obviously has thought about it enough to give Lauren a platform to share her faith through song on her show. (Btw, Lauren also sang vocals on one of the most powerful Christmas songs I have ever heard called “Noel”).

So speaking of song, the next question is:

2. Should Christians be utilizing secular genres in their music?

This same argument has been raging since Larry Norman sang “Why should the devil have all the good music?” in the 1970’s! I remember reading an article many years ago that accused Amy Grant and Sandi Patti of being satanic because they sang Christian pop music. I would hate to see what they thought of Stryper! Some Christians mistakenly believe certain GENRES of music are evil. So when a Christian performs in “that” genre they criticize them. I’ll admit I am not particularly found of heavy metal (I like my hearing intact thank you very much) or hip hop. But if a Christian artist is singing in a style that may reach someone with the gospel then praise God! It’s not the genre we should be judging but the MESSAGE. And as long as that message is biblical I see no problem with it. Long before I was a Christian I was listening to people like Randy Stonehill, The Imperials, Petra and Silverwind. I didn’t realize it at the time but God was using this “rock” music to plant seeds which years later led to my salvation decision. So I get irritated when I come across this argument. It is personal for me.

Some have also pointed to certain Christian singer’s lifestyles to buttress their argument. Yes there have been many gospel singers who’s sins have been vetted publicly. And it is sad to see because it can hurt their message. But I wonder how those making this argument would feel if their private lives were put under the microscope for all to see. Not just actions but every thought (because Jesus emphatically stated that thoughts are under judgment as well). Somehow I doubt they would like that. I know I wouldn’t.

Final thought for the critics. The Apostle Paul spoke of different methods of presenting the gospel depending on his audience. He probably would have been OK with the different variety of Christian music.

Let’s follow his (and Lauren’s) example by presenting the gospel wherever we go. And if necessary use words.

An Elderly Trip to the DMV (a True Story by 83-Year Old Dr. Fred Eichelman)