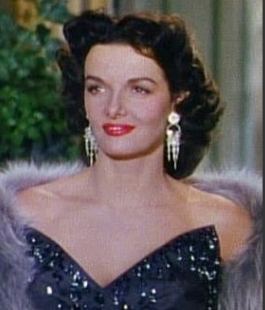 “I love the Lord” is a beautiful statement that sums up Jane Russell’s philosophy. While she is best known for musicals, Westerns, and adventure films, too little has been said about her strong belief in God and how she has practiced her faith. Something not easy in Hollywood. Jane herself did not want to be depicted as a “holy” person , she approached her belief with a -realistic view and a sense of humor. Jane had a favorite cartoon that reflected that. In it God is being interviewed by a Jay Leno type TV host. He is asked What do you consider your greatest creation? God’s reply “A sense of humor and it is a shame so few Christians use it”.

Jane Russell was raised by a devoted Christian Bible teaching mother who had been a stage actress before she was married (so she wasn’t worried when her daughter later became an actress). Her husband died at 47 years of age, leaving her with Jane and four younger brothers, an eight-acre ranch, four horses and a cow.

Jane gave her heart to the Lord at age 6, received her baptism at the age of 12, and in her late teens discovered the wiles of what she calls “the world, the flesh, and the devil”. But the Lord was faithful,never left her side through thick and thin and opened many controversial doors that led to things He wanted her ultimately to accomplish, through the motion picture business, the stage, recordings, and night clubs. (“All things work together for good…”)

Though Jane was known for her tall beauty, she would never compromise her Christian moral standards to please a studio. She says.“ There was and remains a desire for studios to promote bosomy beauty and she often walked off a set if she felt that was an emphasis in a take she was in.

It was when Jane was modeling, that an agent came by the photo studio and “swiped” a head shot of her. It was shown to movie studios and Jane was called to test for an upcoming movie that needed a half Irish/half Mexican actress. Soon she was contacted to be awarded the leading role in The Outlaw. There was a three year publicity campaign that touted Jane Russell in particular and it was a “smash in the box-office.” 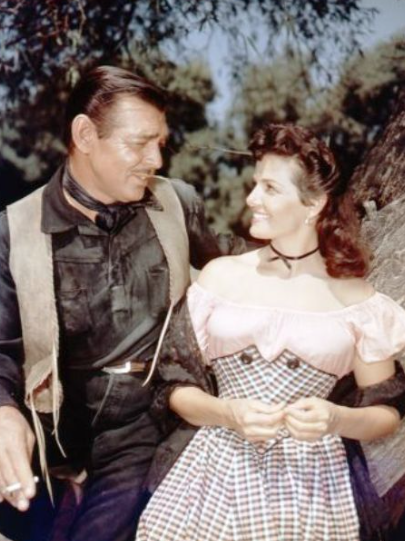 Jane went on to star in a string of popular movies working with Bob Hope, Marilyn Monroe, Clark Gable, Robert Mitchum, and others. Two of her most famous films were Gentlemen Prefer Blondes with Marilyn Monroe and Paleface with Bob Hope.

“Bob Hope was a ball to work with…he was even funnier off screen than on, and everything was relaxed except his chocolate eyes which never stopped darting, never missed a thing.” During World War II and after she spent time touring air bases and army camps with Bob Hope-entertaining the soldiers and refreshing them with hope and light-hearted humor. ”It was wonderful to work with Bob,” Jane comments wistfully, “And we felt such a sense of privilege about our work with the troops.”

In all, Jane made two dozen films with memorable performances in Macao, Montana Belle, Son of Paleface, The French Line, The Tall Men, The Revolt of Mamie Stover, Fate is the Hunter, as well as the two most famous mentioned above. There were also many TV appearances including a starring role in The Yellow Rose. 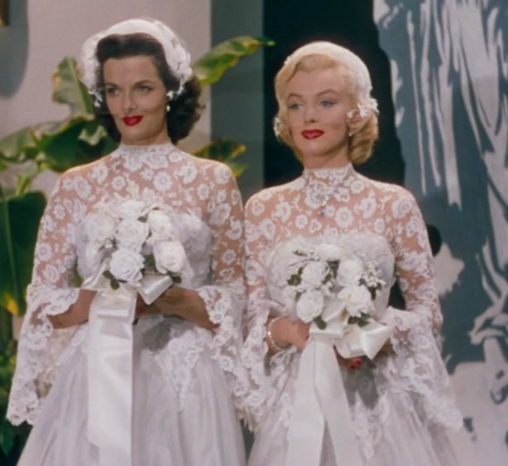 In the early days of Hollywood, says Jane, “Studios had control of everything. You did what they wanted you to do, or you didn’t get paid.” The studios also had a Brean office, later called the Hayes office, where they checked everything about the morality of the movies. At one point the studio wanted Jane to wear a bikini and she immediately protested. She refused and left the set, “but the studio scrambled and quickly came up with a one piece alternative.” Jane felt vindicated and protected. “Now studios have nothing to say about these things. Outside people rent the areas, and it’s all independent. There’s no Brean office, no guarding…It’s a terrible time today…If I had to start all over today I’d have to go home to the ranch!”

Jane Russell admits that it is hard for young Christians to make it in Hollywood today and Mel Gibson, for example, “had a real struggle” to get his The Passion of the Christ out. Of course he did with a great deal of success. However, Jane herself “fought the good fight, and kept the faith” in a Hollywood not always ready to accept her views.

Her own beliefs began to develop at an early age thanks to her mother. She jokes about one person who she modeled after. “I have always been in love with C.S. Lewis and said he was to be my next husband. But the darned man up and died many years ago.” She appreciated, through reading Lewis, how terrible her life would have been and how bad she would have been if she didn’t believe in the Lord. Books have meant a great deal to her and once, while in the hospital, the positive writings of Norman Vincent Peale had meaning for her. However, no book has been more important to her than the bible.

It was while Jane was attending the Hollywood Presbyterian Church that it was suggested that meetings be started in the homes of people in show business who had a problem attending a strange church. Guest ministers were invited to meet with the groups and there was bible study, prayer, and singing. With Jane, Connie Haines, Beryl Davis, and Colleen Townsend were the first to organize these meetings and they called themselves the “Hollywood Christian Group.” They were soon joined by Rhonda Fleming and meeting once a month they were joined by Roy Rogers and Dale Evans, Donald O’Connor, Hugh O’Brien, Peter Potter, Ronald Reagan who loved long discussions and many others. Marilyn Monroe attended once when making a film with Jane, but unfortunately did not return. For Jane that was always a major regret. Jimmy Dodd, Western actor and Emcee on Walt Disney’s Mickey Mouse Club was so moved as a member of this group that he became a minister. The lives of many were touched and there are more such groups operating today.

Jane was a strong believer in prayer and knows that more than once it saved her life including one night when she was attacked in her own home. One thing she especially prayed for was children. She had no idea that God would answer that prayer thousands and thousands of times.

During the war years Jane married football star Robert Waterfield and during that twenty three years she and her husband adopted three children. Her second husband, Roger Barrett, died three months after her marriage, and finally she married John Peoples, to whom she stayed married for twenty-five years until his death in 1999. Between the two of them, Jane remarks with amazement, they had eight children, fifteen grandchildren, and seven great grandchildren.

Jane created her own special organization called WAIF in 1955. The name referred to children without homes. This organization placed about 51,000 children with adoptive families. She went all over the nation and overseas as a fundraiser and spokesperson putting her faith to work. The chapters for the original program have closed with the exception of the one in Los Angeles now known as “Operation Children”. This group holds four parties a year for four different groups of children and prospective children. Adults and children intermingle, eat, play games, and get to know each other in a park. This approach has helped new families to be formed.

Jane also championed the passage of the Federal Orphan Adoption Amendment of 1953, which allowed children of American servicemen born overseas to be placed for adoption in the United States.

According to some critics, Jane devoted much greater energy to WAIF than to maintaining her movie stardom. At various points of her career, she took years off of movies to attend to family and ministry matters. Her priorities were clear and often very public.

She admitted that “taking a stand today for Christ” can create enemies in Hollywood unless you’re a big star, however she believes that first you must “establish your credibility, then preach your message.”