Both lefty groups claim to be Orthodox Jewish organizations and with his black hat, dark suit and black beard, “Rabbi” Mike Moskowitz certainly looks the part of a real Orthodox Rabbi.

But he’s as real as Hitoreri and Torah Trumps Hate. 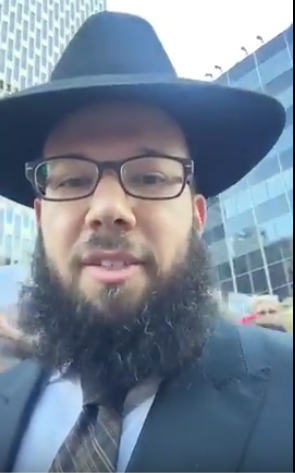 “Rabbi” Moskowitz is actually employed by Congregation Beit Simchat Torah, a gay non-Orthodox institution. Its clerical leader, “Rabbi” Sharon Kleinbaum, was ordained by the Reconstructionist Rabbinical College, a movement that rejects the idea of both God and the Torah. While Beit Simchat Torah’s views aren’t unusual within its movement, its anti-Israel politics have made it controversial.

During a previous war with Hamas, an exodus of pro-Israel members occurred at Beit Simchat Torah after it was caught praying for Hamas terrorists and hosting BDS bigots.

“Recent events have demonstrated that CBST is far more committed to a progressive political agenda than to the Jewish people,” Bryan Bridges, a former board member, wrote. “I couldn’t imagine raising a child in this congregation, and have that child hear, just before we recite Kaddish, the names of people who are trying to kill her grandparents.”

Bridges has higher standards than “Rabbi” Mike Moskowitz who collaborates with the institution as its “scholar-in-residence for Trans and Queer Jewish Studies”. Pro-Israel gay leaders have condemned Beit Simchat Torah’s collusion with Islamic homophobia and anti-Semitism.

Mike Moskowitz is often wrongly described as an Orthodox Rabbi, his own site states that, “Rabbi Moskowitz was assigned secular, then identified as ultra-orthodox for but twenty years, and now embraces a religiously non-conforming identity.”

A Jewish Week article photo shows him with a clean shave and no black hat. A note in the article mentions that, “his old black hat” makes its appearance “when necessary”.

That apparently includes Hitoreri and Torah Trumps Hate rallies where the costume gives people the impression that they brought an Orthodox Rabbi out to protest Trump and Republicans.

Like Moskowitz, Hitoreri and Torah Trumps Hate are inauthentic and collaborate with anti-Israel hate groups.

Torah Trumps Hate is described as “a community of orthodox and orthodox-friendly Jews” who are part of the “resistance” to the results of the 2016 election. “Orthodox-friendly” is not Orthodox.

Elad Nehorai, a leading Torah Trumps Hate figure, admitted that the group was run by “Victoria Cook, a woman who doesn’t consider herself Orthodox anymore.” Cook has said that she doesn’t believe in G-d and had co-produced Screwed, a documentary “about pornographer Al Goldstein”.

Cook, an entertainment lawyer, is still described as Torah Trumps Hate’s “founder and leader” on its site while “leading Torah Trumps Hate into a future of activism and public-facing political actions.”

An organization claiming to represent Orthodox Jews is being led by someone who isn’t Orthodox.

It’s calling itself Torah Trumps Hate even though its leader and founder doesn’t believe in Torah.

Nehorai, TTH’s other key figure, is a lefty hipster who drifted around Chabad for a few years before breaking with the movement and getting a “quick”, “simple” rabbinic ordination that “mostly happened over email”. Nehorai has admitted, “I wasn’t an expert in Shabbat or Kashrut (laws of kosher food) or Niddah (marriage laws),” but, “I was an authority of my own Torah.”

At an event in support of the March for Racial Justice, Cook claimed, “We are diverse”. Including, “those who are observant in other ways, to those like me who are OTD [off the derech, or lapsed Jews].”

Torah Trumps Hate appeared at the pro-black nationalist event along with Jewish Voice for Peace, an anti-Israel and pro-terrorist BDS hate group that has flirted with outright anti-Semitism.

Also, there was Farrakhan supporter, Linda Sarsour, who had urged Muslims to dehumanize Jews. At the rally, Sarsour warned, “we will not be intimidated by right-wing Zionists, by white supremacists, by racists.”

On Twitter, Elad Nehorai claimed that “Calling out Farrakhan after Pittsburgh” is “also a sickening attempt to create racial division.”

Krevat has repeatedly retweeted attacks on Israel by anti-Israel activists. She also retweeted Linda Sarsour. Like Moskowitz, she worked with Uri L’Tzedek, a pseudo-orthodox group that serves as an incubator of lefty activists. And she co-authored at least one piece with Moskowitz.

Despite occasionally claiming to be Orthodox, Krevat largely retweets non-Orthodox clergy. There is nothing “Orthodox” in the lifestyle that she displays on her social media accounts. Over the summer, she tweeted about “feeling so inspired” at visiting the hateful premises of Beit Simchat Torah.

“This gorgeous shul embodies hospitality&inclusivity,” she tweeted about a place that its pro-Israel members are fleeing because it embodies support for terrorism and the murder of Jews.

Its activism borrows the style of anti-Israel hate groups such as If Not Now which targets legitimate Jewish organizations in support of radical lefty causes. The protests are invariably deserted. On one video, Mike Moskowitz can be seen lecturing about the suffering of illegal aliens to what appears to be an audience of two women. Torah Trumps Hate and Hitoreri’s petitions struggle to reach 200 signatures.

These “Orthodox” Jewish protests suffer from a distinct shortage of Orthodox Jews. Their key figures are processed through the same pipeline of professional social justice groups. Their rants about white people and recitation of party line causes are equally interchangeable. But they are meeting a demand.

The demand does not come within the largely conservative Orthodox Jewish community. Instead it comes from lefty groups which have seen the rising Orthodox demographics and seek to hijack its voice for their causes. They are backing and promoting fake Orthodox social justice movements that do not represent and do not speak to the conservative values of a religious and traditional Jewish community.

“While we need the outside world to see that observant Jews have not lost their moral compass, we also want the bullying voices within the Jewish community to no longer be so sure that they have a majority of support,” Victoria Cook declared.

Victoria Cook, by her own admission, is not an observant Jew and does not believe in God.

Her activists are the ones trying to bully Orthodox Jews into remaining silent. They are targeting Orthodox Jewish organizations that represent hundreds of thousands of religious Jews. And they are doing it while collaborating with lefty anti-Semites in a profoundly anti-Semitic movement.

Fake Orthodox Jews campaigning against Trump would not have a fraction of the attention without a fake news media that gives them millions of dollars worth of unearned publicity.

The truth was always easy to find.

The Chief Justice Has It Wrong…Again!