Last November, Jews For Racial & Economic Justice (JFREJ) released Understanding Antisemitism. The bizarre tract had as much in common with the reality of anti-Semitism as Marxism does with economics.

JFREJ, a radical leftist group, claimed that “white Christians” in Europe had “invented anti-Semitism”. That would have come as news to Pharaoh, Haman and Mohammed: in JFREJ’s parlance, “people of color” who had innovated and spread anti-Semitic ideas, while seeking to exterminate the Jews.

“Antisemitism was something European Christians created and brought to the Middle East within the last 150 years,” JFREJ insisted. There was no such thing as Muslim anti-Semitism, the leftist group, which collaborates with Linda Sarsour, a Farrakhan supporter who had urged dehumanizing Jews, insisted.

Black and Muslim anti-Semitism are occasionally justified as a response to white Jewish oppression. But mostly their existence is denied. Racial anti-Semitism, JFREJ insisted, only existed as white supremacy. 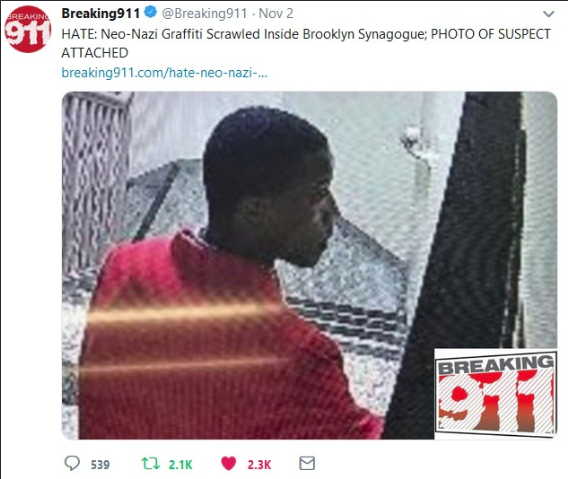 Polite’s anti-Semitic vandalism broke up an appearance by Ilana Glazer, an obnoxiously unfunny leftist comedian, to rally turnout before the election. Polite scrawling, “Jew Better Be Ready” and “Insert Oven Here” got far more attention than the actual fires he set in more conservative religious institutions.

It was the fire he set in a Yeshiva school coat closet early in the morning that finally got him caught.

Glazer went on Democracy Now, notorious for defending the anti-Semitic Hamas terrorists who murder Jews, to whine that, “we lived through a safe, you know, physically benign version of a white supremacist act.”

Except the surveillance footage had made it clear that the vandal was a black man. But there was no room for acknowledging the reality of black anti-Semitism on the Left.

Last year, Juan Thompson, a former writer for the anti-Semitic and pro-terrorist site, The Intercept, was arrested for sending bomb threats to a number of Jewish targets, including the ADL. Like Polite, there were efforts to paint Juan as suffering from mental illness. JFREJ went even further, declaring, “We reject attempts to explain away anti-Semitism by laying the blame on Black men.”

Its guide to distorting anti-Semitism had insisted that, “singling out Black people and other People of Color as especially anti-Jewish is racist.”

If “white Christians” invented anti-Semitism, white American Christians appear to be terrible at it. The ADL’s own surveys show black anti-Semitism as being 2 to 3 times higher than average. A statistical analysis in the Washington Post suggested that the majority of Americans who hold deeply entrenched anti-Semitic views are minorities.

Two days before James Polite disproved the myths about black anti-Semitism that his foster mother had helped spread, swastikas were spray painted on houses in Brooklyn Heights. Surveillance footage showed that two black men were responsible. The two, Jarrick Wiltshire and Daul Moultrie, turned themselves in.

Closing out the week, six black teens hurled a pipe through the window of the Volkan synagogue in Brooklyn during Sabbath prayers. Prior to that they had allegedly accosted a girl in the area.

And little interest by the national media which was too busy claiming that the essence of anti-Semitism was saying anything negative about a career collaborator with anti-Semites, George Soros.

These anti-Semitic attacks probably had nothing to do with Pittsburgh. They are instead typical of the everyday, ordinary anti-Semitism that Jews living in urban neighborhoods regularly experience.

This October, a Jewish man in Brooklyn was beaten so severely with a stick that it broke. In April, in that same neighborhood, a Jewish man suffered a cracked rib in an anti-Semitic assault by a black man screaming, “I hate Jews.” Both incidents were only notable because they were caught on camera.

Yeshiva Beth Hillel of Williamsburg, where Polite set his final fire, had previously come under attack from lefty activists with Yaffed whose smears of Jewish schools are unquestioningly recirculated by the media, (without ever reporting on who is behind the group) than it has reporting on the school arson.

The Volkan synagogue, which was attacked on the Sabbath, and Yeshiva Beth Hillel, are less than a mile apart. And yet these two attacks on Jewish institutions so close together in time and space were never assembled into a pattern by the mainstream media. Because it didn’t like what the pattern would show.

A week later, the mainstream media which broadcast Polite’s magic marker scrawls to the world, hasn’t even bothered to report the names of all the Jewish institutions where the black leftist started his fires.

A recent New York Times piece noted, “there have been four times as many crimes motivated by bias against Jews — 142 in all — as there have against blacks.” It also addressed the bias and disinterest in these crimes, much of which target the city’s working class religious Jewish population in urban areas.

“When a ḥasidic man or woman is attacked by anyone in New York City, mainstream progressive advocacy groups do not typically send out emails calling for concern and fellowship and candlelight vigils in Union Square, as they often do when individuals are harmed in New York because of their race or ethnicity or how they identify in terms of sex or sexual orientation,” it noted.

But it awkwardly elided the issue of who is behind the violence. The attackers have “varied backgrounds” and their identity “presents complexities” for liberals.

There’s only so much ideological heresy that can be tolerated in the pages of the New York Times.

The media assumes that swastikas and Holocaust imagery are the work of white supremacists. But, as James Polite, Jarrick Wiltshire and Daul Moultrie remind us, that isn’t at all the case.

Black nationalists often believe that there is much to admire about Hitler and the Nazis. They identify with Nazi racial supremacism and the calls for the mass murder of the Jews.

Louis Farrakhan had said, “The Jews don’t like Farrakhan, so they call me Hitler. Well, that’s a good name. Hitler was a very great man.”

The Nation of Islam had an extensive history of collaborating with the KKK and the American Nazi Party.

Stokely Carmichael had dubbed “the greatest white man”. And he had declared, “The only good Zionist is a dead Zionist we must take a lesson from Hitler”.

“What the Negro needs is a Hitler,” Marcus Garvey had said admiringly.

“I got the extermination blues, jewboys / I got the Hitler syndrome figured,” Amiri Baraka, the black nationalist poet, had hatefully scribbled.

During the pogrom in Crown Heights, black marchers shouted, “Heil Hitler”. At the funeral at which Al Sharpton delivered an anti-Semitic eulogy, a banner read, “Hitler did not do the job.”

Last year, three black men scrawled a swastika on the door of the Sutton Place Synagogue in Manhattan. No media accounts mentioned the race of the suspects. While synagogue clergy later announced that two arrests were made, the media never bothered following up with a story on their identities.

Also last year there was outrage when an Arizona family’s menorah was twisted into a swastika. The police arrested Clive Jamar Wilson, a black man whose father, like James Polite, had attended Brandeis.

Conflating anti-Semitism with white supremacism, as the Left does, is misleading. And even when it comes to neo-Nazi signage and slogans, the perpetrators are just as likely to be black Nazis.

The Left claims that it wants to fight Nazis. But it quickly changes its mind when the Nazis are black.

Insisting on fighting Nazis only when they’re white isn’t opposition to either Nazism or anti-Semitism. It’s an endorsement of both as long as they are being practiced by the racial supremacists of the Left.

Jane Russell, a Warrior for Her Faith in Old Hollywood