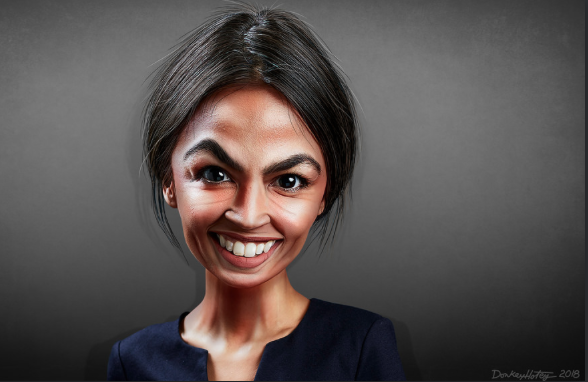 The ink is not even dry yet on the last Democrat-provided ballot yet and some of the counting of votes continue monotonously in South Florida, Georgia, Arizona, and who knows where else they will find “extra” votes, but one thing is sure…the Nuts have been harvested and are being piled up around the Capitol in hopes that something will germinate.

What has germinated most rapidly are the nuts that support the insanity of global, man-caused climate alarmism…another of the left’s favorite whipping boys to get everyone whipped up over that has no basis in objective scientific fact.

Led by the head of the nut-cases swept into office by the blue eddy (it was hardly a wave), Alexandria Ocasio-Cortez (O-C), has stirred up some mud at the mouth of Nancy Pelosi’s palatial office today as a group of her enthusiastic young nuts started a sit-in to push Pelosi further to the left and into supporting a 12 year plan to make the U.S. 100% green with regard to energy and to rebuild the electric grid in the same time frame. This gang is bound to make Pelosi’s life miserable (which I don’t mind a bit) but will turn into the force that sends the Democrat equivalent of a political party down for the count in 2020.

O-C’s game plan fails to take into consideration that the House has no power to do anything but propose legislation. In order to turn those proposals into law, they must convince at least 60 members of the Senate that their ideas are sensible and fiscally responsible before the bill goes to President Trump’s desk for signature. Mark this day on your calendar when I said that neither of these latter requirements will be met between now and 2020 because the Senate is still at least as firmly in the hands of conservatives and Republicans and President Trump intends to run again in 2020 making any support for climate-change and the deliberate destruction of a booming oil and gas economy in America far from likely. In fact, it is ludicrous to even consider the possibility of any such effort gaining significant traction in the near future.

It is apparent from the get-go that O-C is a ridiculously naïve and insanely radical representative of New York City who will be quickly put in her place by those from the Democrat “establishment” that demands complete loyalty to the party orthodoxy. Right now, the Democrats are so focused on investigations and impeachment that they will hardly have time for O-C and her environmental nut jobs.

On top of that, O-C may be spending the next few months looking for ways to pay her rent since she was so out-of-touch with how things work in the federal system that she has expressed despair over the lack of an apartment allowance that would pay for the rather expensive real estate rents that she will face in January when the new Congress is seated. If it were not for how ludicrous her comments have been in the media lately, I would think it was a complete hoax and she was not really elected to represent a half-million citizens who deserve better (or, given the fact they voted for her, might just deserve what they get…no effective representation at all). It is a clear condemnation of our education system that someone so un-educated on how life and our government works can still get herself elected to the Congress. Maybe that’s what kept me from winning the primary in 2010…I wasn’t radical enough or stupid enough to make people want to throw their vote away on an empty head. Who knows. My conscience is clear on that score.

We can all hope that the insanity continues from O-C as she run roughshod over the Democrat establishment as she provides some true comic relief to our side of the House. It is apparent that there is nothing substantive coming from her election. She will, in fact, be an asset to the conservative cause.