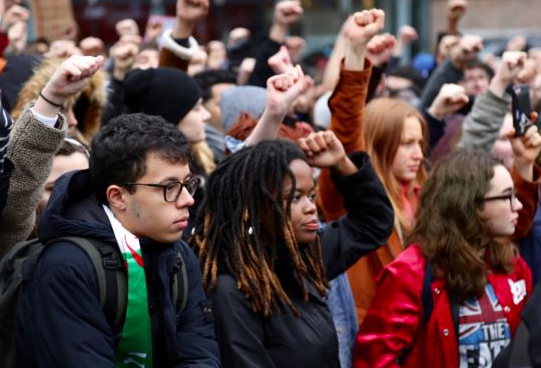 When I opened my computer I found myself looking at an article from CBS This Morning about a “conversation” with Sonia Sotomayor and Neil Gorsuch on the teaching of civics (or the lack thereof) in public schools. The opening paragraphs lamented the fact that only half of eligible voters would get off their butts and head for the polls on Tuesday, 11/6. This is most likely caused by one of two things…cynicism – the belief that one’s vote does not matter, the system is rigged, etc. The second reason is nothing but pure ignorance or ambivalence to the need to engage in deciding who leads our country.

These two problems in generating turn-out for our elections – particularly those not including a vote for a President – are long-standing and ongoing. Several issues have come together this year to generate higher than normal interest in a mid-term election, but we can only hope that this higher level of engagement will carry over in the future.

The second article that caught my eye was posted in the EdWeek Update. It discussed the measures that might be taken in case a planned walk-out by student supporters of climate change and gun control – brought to us by none other than the ill-informed and profane persona of David Hogg of Parkland, FL. The walk-out is planned for Tuesday, 11/6 to give students a voice on those issues and probably to keep Mr. Hogg’s face before the cameras that much more. If I sound a bit sarcastic, it is only because most of what leaves David Hogg’s mouth is either profanity or misguided nonsense that has no connection to truth when it comes to gun control, gun ownership, the purpose of the 2nd Amendment or much of anything else he says. He’s simply an empty suit – Nothing constructive to contribute.

What’s my point? Simply that there is, indeed, a terrible lack of interest among half the country’s voters in even participating in the process of picking our leaders while a small group of extremists seems to be given a greater voice than they deserve in stirring up the uninformed. The news media often aids in this effort and we must guard against allowing those fringe voices from overwhelming reason in the process.

We must also keep in mind that students that reach the age of eighteen in today’s schools are lucky if they have had more than a cursory education in how our system of government works and what they should do to inform themselves about the issues and candidates running for the various offices of government that will, at least in future years, impact their lives in ways they could not imagine today.

“It’s been well documented that the partisan discord in our country followed very closely on the heels of schools stopping to teach civic education. One must remember why. It wasn’t for an unimportant reason; there was a change of emphasis in the educational system in the country where they wanted to pay more attention to STEM.”

While I do not agree completely with her suggestion that STEM has weakened civics, she does acknowledge that the emphasis that civics received in past generations has been diminished considerably. I believe it is more likely the result of an effort by the extremely left-leaning academic community to de-emphasize civics as a means of “dumbing down” our kids so that they are less likely to understand when efforts are made to persuade them to follow socialistic/leftist ideology. It is also a far more difficult subject to work with when creating objective testing materials that have replaced the teacher in evaluating student achievement.

“It’s important if we the people are going to run our government, that we know what it is, how it works, and how we can participate in it.”

This is, far more than anything, the point of civics education. It is clearly not about teaching kids how to be social justice warriors as many teachers these days seem to believe. Rather, it is teaching students why our system of government was established, who should be running the show, how to engage with their representatives, and how this provides them with a greater amount of personal freedom – and responsibility – than any other form of government on the face of the earth.

One encouraging aspect of the EdWeek article was that it briefly discussed what teachers and administrators should do if students do walk out of class to express a political position on any issue or for any other reason. The overall position taken was that regardless of the reason a student leaves class without permission – political or otherwise – they have violated school rules/policies and they should be treated in the same manner. Coming from EdWeek, that is quite a statement – a statement with which I wholeheartedly concur. Being engaged and aware of what is happening in our country should be encouraged. Civil disobedience is something that should not be advocated. To do otherwise is to diminish the role that rules will play in our children’s future careers and lives. Being allowed to decide when and for what reason the rules can be broken without consequences only encourages disrespect for the rules that will help determine success in their futures.

There was a time that one faced both the wrath of the school system as well as even more wrath at home when breaking the rules. Perhaps that’s where civics should really begin to be learned…at home. Some would call that wishful thinking. I’d call it an imperative for our country’s future.