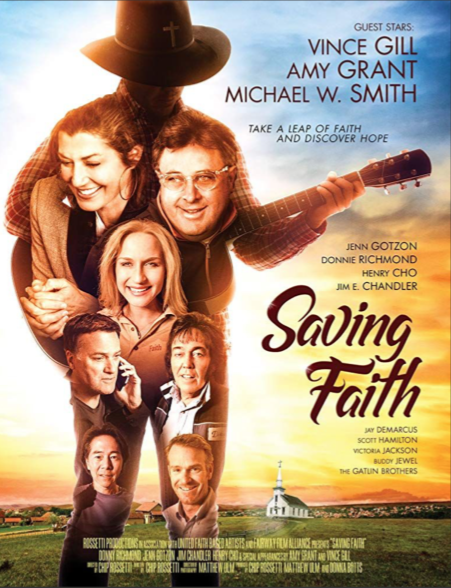 Saving Faith is another film that seems to fit the times as it marks a rising movement in many communities and small towns today. This is a trend to restore old theaters back to the glorious ‘40s and ‘50 when movie houses reflected a simpler time in art and design. The turbulent times we are having today has perhaps created a desire to return to yesteryear when families would gather once a week in a theater for clean wholesome fun

The plot here is the saving of the Ritz Theater by its young owner Faith Scott portrayed by Jenn Gotzon. Faith is trying to run the theater which is within her family heritage. It is deeply in debt and an unscrupulous business man is trying to take it over so the property can be sold for a purpose that would enrich him. Her greatest supporter is her Uncle Donny, Donny Richmond playing himself. Donny Richmond plays his lead role, not using a scripted name, and viewers will want to see more of his work.

Faith has other friends including Frank Hendell (Jim Chandler) who has been in love with Faith for years. Fitting as Jim E. Chandler is the husband of Jenn Gotzon-Chandler and again they prove an amazing team. It is Uncle Donny who comes up with schemes to save the theater.

The film ends with a big musical climax which is very uplifting. The strength of the film lies in the reliance on continual prayer and faith in God. This would be a good one for churches and Bible studies to use. There are short surprise appearances by Victoria Jackson, Vince Gill and Amy Grant.

On a political or governmental note this writer would love to see the movement for theater restoration to spread into every community. Plus the effort to encourage the making of films that are faith and family friendly This is perhaps why independent film companies are starting to outdistance Hollywood.

The Chandlers, Jim and Jenn Gotzon are part and partial in this movement and are working to gain support for their next feature The Farmer and the Belle. In the meantime Saving Faith is available on Amazon and at Walmart.

Why Are High School Students in Newton, Massachusetts Being Given Saudi Education?