Dear friends, here are a few questions for us all to think about today:

Does a woman’s vote matter?

What are her chances of getting in to the boardroom?

If a woman runs today, will this somehow catapult her into a top position in politics?

Alternatively, can women even overshadow the men that are running? 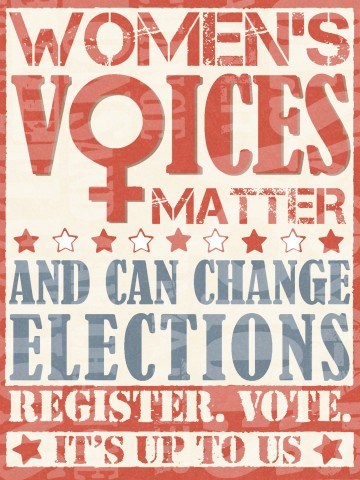 Why do I ask? Because the relentless mailers are batting the Republican men around like a balloon blowing in the wind. The Republican Party does not support women in the general sense; in fact, most of the Republican establishment are indeed ‘old white men,’ as the common saying runs.

But why am I saying this? Because I am running for Mayor, and yet my own party has turned their back on me as many as three times in past elections. They say there is “no room at our table for you.”

And yet, now the Democrats are beating at their door with fresh new faces, taking on the men. That’s right! Well guess what, their Democrat candidates are indeed women.

So, let’s have a little look at the broader context. Here in 2018, women candidates have broken the records for the number of candidates for governor, U.S. House and U.S. Senate. And depending on how the midterms go, they may well make history, with record-breaking numbers of women as elected representatives of the American people; the chosen representatives of all Americans, of every demographic.

Indeed, the November elections could see the first black woman to serve as governor, the first Native American woman in Congress and the first openly bisexual senator, among many other firsts. There is a whole list of potential precedents that can be set here, and the historical significance of all this is not to be underestimated.

So, let’s be clear about this: there are some clear signals that women candidates — especially on the Democratic side — will form a “pink wave” to rival or even flat out outperform the Republicans.

Does that sound bitter? No, I am not angry at all about losing to other women! I’m simply that the GOP, especially in California, are saying: “Too bad! “We will not back fresh new conservative women like myself, and we will not openly support Trump!”

What do you think about that?

And is that some strange new thing?

No, not at all, In fact, this has been consistent party practice over the past three election cycles. Three previous election cycles. Then, funnily enough, we seem to be fighting to stay alive! Isn’t that kind of surreal? Well, I have to say, I am afraid I do blame the Chairman of the GOP for this unfortunate situation. With better planning and more sensible strategies, we could be doing a great deal better than we are now. So, isn’t it worth having a serious think about how to be more welcoming to our talented, perceptive and well-engaged representatives of all backgrounds and demographics?

Well, surprise surprise! Now it just so happens a whole slew of attack ads is coming out, attacking the men of the GOP on women’s issues. Well? Should we just ignore this and say it is just typical playground politics? No, I am sure we shouldn’t just write this off as opportunistic personal criticism. Clearly, attack ads are an effective weapon, as history has proved. Therefore, instead of assuming people will just ignore and laugh at these ads, we have to ask ourselves if our fellow Americans are going to perceive even the slightest grain of truth in these adverts.

That is right: we are going to have to be honest, and consider whether this image as a party of old white man is more widely held than we would hope, and whether it might even be a more effective weapon against us than we would like to think. Because ultimately, if we lose out on being a broad tent party that welcomes talent from a wide range of demographics, then this is going to cost us a lot at the polls. And yes, you’ve guessed it! The Democrats seem to be a lot smarter on these issues, and they know how to make some solid gains. They are currently opening their arms to support women –indeed; even hardline socialists are gaining ground!

This ought to be a wake-up call to the GOP. We have to make sure we are getting enough recognition for all our talented candidates and representatives, regardless of gender, race, religion, sexuality, or any other personal characteristic. If we get complacent about this, we will only have ourselves to blame, when we finally get a solid hammering at the polls. We are really going to have to do a whole lot better on this issue.

My fellow Republicans, please do listen to me. Please support your candidates, and support all your candidates; and please do not show any kind of preference, knowingly or unknowingly, for people who tick all the right boxes. It may be that there are some unconscious biases here; but no matter what lies behind the current situation, please don’t give the Democrats any more ammunition. Because you know that if you, they are most certainly going to use it!

Let us make sure we are a party that welcomes all talented candidates, regardless of our demographics. If we can do that, and really work together, we can become a truly unstoppable force!