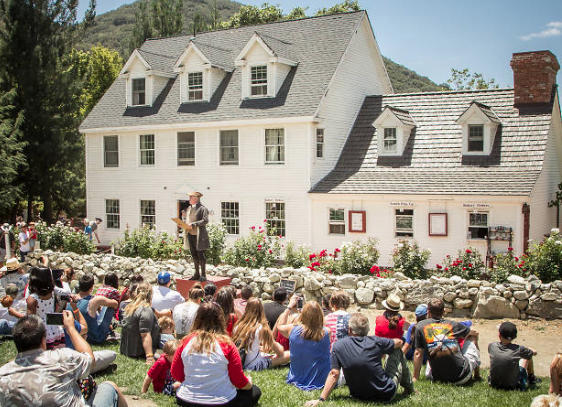 Thousands of children throughout Southern California have taken field trips to Riley’s Farm in Oak Glenn, Ca since 2001 without a complaint. However this popular U.S History program may end if a few liberal educators have their way.

James Riley of American Heritage Farms, a staunch conservative and Stanford educated historian, filed a multi-million dollar law suit against a school district for violating his First and Fourteenth Amendment rights. Claremont Unified School District and seven individuals including two principals, the superintendent and board members are among those named in the suit.

The defendants began attacking Riley and expressing emotional outrage over his satirical tweets about Stormy Daniels, Elizabeth Warren, and a critique of black supremacy ideology, on his personal twitter account. Riley asserts the school district and its employees are using their government positions to restrain the people.

Riley often collaborates with teachers to create programs that work with their classroom lessons. According to Riley, his personal views on current politics are not discussed with teachers, students or other guests.

The action states,”Riley’s Farm works diligently to present an authentic historical experience in the content of presentation, the period detail of costumes and strives to avoid anachronism.”

Despite the tremendous efforts of historical accuracy, if the left leaning employees in the Claremont school district have their way, the popular educational programs will be abolished. If these programs that teach U.S. History are curbed thousands of more children and their families will lose out at the hands of a few government employees.

According to Riley those listed in the indictment have imposed their personal political will onto his business by publicly retaliating and branding him as racist for his tweets. Riley is seeking to recover current and future damages.

Defendants, Principal Ann O’Connor of Chaparral Elementary School and Principal Brenda Hamlett of Sumner Danbury Elementary School are accused of wielding their power and positions by committing overt acts to prohibit all teachers in their schools from taking field trips to Riley’s Farm.

Attorney Thomas Eastmond from Goe and Forsyth, LLP who represents Riley said, “While private citizens may generally do business with whomever they please, public officials are bound by the First Amendment.  As a rule, under Supreme Court precedents, they may not cease doing business with someone because they disagree with his speech, on his own time, on matters of public concern.”

Before filing in court Riley sent a letter to the District, the Superintendent and all board members in an attempt to remedy the situation.

Counsel for the Claremont School District replied with a letter endorsing the decision of O’Connor and Hamlett (and potentially other administrators of other districts) to withdraw the schools’ longtime patronage of Riley’s Farm.

Eastmond said the districts motives and goals to retaliate, punish and blacklist the farm because they do not agree with Rileys political views were made clear in their letter.

District’s counsel asserted their client was within its rights to cease field trips to Riley’s Farm, “Nothing in the First Amendment obligates the district to continue doing business with any individual or organization that makes public statements which are inimical to the District’s educational mission…The District has the obligation to not expose children to an individual who engages in these crude and tasteless comments.”

Riley and Attorney Eastmond disagree and referred back to the Bill of Rights which protects every Americans civil liberties from government over reach.

Eastmond also referred to in the lawsuit, an excerpt from a closing speech students hear at the end of their field trips, “I would like you to ponder for just a moment before you head home where there is food on the table and friends next door, all the Americans throughout time from Bunker Hill to Normandy and beyond…who never got a chance to go home….because they gave their lives…so that we may live in a nation where we can vote, we can be tried by a jury of our peers, where we can speak our minds without fear…”

A letter to the public from James Patrick Riley’s website:

Due to the kindness of our guests, Riley’s Farm has grown substantially.  All successful enterprises have their detractors, and ours is no exception. In our case, the detractors have taken it upon themselves to post shameful and downright false comments about my character based on their reading of tweets taken out of context.  I’m beginning to understand why some comedians are avoiding college campuses: we’re losing both our sense of humor and our ability to exchange ideas.

In any event, my political and spiritual convictions are precisely that: mine. They don’t affect adversely the way the apples grow on the trees or the content of our living history programs. I routinely purchase products from people who have dramatically different perspectives on the world, and I serve people, with love and respect, even when I don’t agree with them. We are proud of hiring a very diverse group of people with a very wide range of political and spiritual beliefs.

It is both amusing and sad that some people’s sensibilities are so delicate that they feel they cannot tolerate opinions that vary even slightly from their own, and further, that they feel the need to attempt to destroy those who differ with them. H.L. Mencken said “Puritanism [is] the haunting fear that someone, somewhere, may be happy.” If the new “puritans” out there want to waste their time trying to stamp out all who disagree with them, then so be it. But that seems like a lot of work, and it doesn’t sound like the sort of tolerance they claim to be seeking. We here on Riley’s Farm will continue the far more profitable, worthwhile, constructive, and fun pursuits of making people happy.

Daniel Greenfield: God and Guns in the Synagogue

Climate Nuts and Other New Delicacies