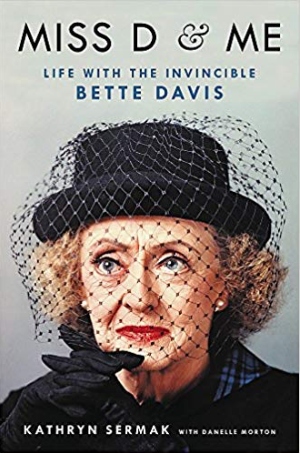 Before you dismiss this review thinking it is just another Hollywood biography, I encourage you to read a little further because it is so much more than this. To start with, I read this book as my mother was in declining health and, in fact, this review was delayed because of her passing. Like Bette Davis, my mother suffered debilitating strokes, and this book provided great insight into what it is like for both the stroke victim as well as the caregiver. It was so helpful to me personally to read what the author had to say as she cared for Bette Davis through that difficult time and through the end of her life. Many of you may be going through something similar and this book may be equally helpful to you to manage through these bittersweet aspects of life with love and care.

I would be remiss if I didn’t also say something about the author – Kathryn Sermak. I have worked around education and students all my life so I know how rare it is to find a student like Kathryn (that’s what she was at the time she first started to work with Miss Davis at the age of 23). She studied with Jane Goodall at UC Santa Barbara and graduated from USC after completing her senior year at the University of Madrid, and attending the Institute Catolique De Paris, and was fluent in Spanish and French because she would make the most of opportunities to travel and work abroad at such a young age. I have always admired young people that could do this – sometimes traveling with little to no money, backpacking through foreign countries, not initially able to speak the languages, trying to figure things out from one day to the next. Other than war, this seems to me to be the ultimate stress, yet individuals like Kathryn thrive on it – and it is through that they can experience so much more of life than those more timid souls like myself can.

It was these experiences that led her to work for Princess Shams Pahlave, sister of the Shah of Iran before she came to work for Miss Davis. Even as I marveled at her accomplishments at such a young age back in 1979, I knew she would be of great success in her life – and time proved me right as she has indeed accomplished a great deal since then. The book captures the story of one that was initially hired as an employee of Miss Davis at the tail end of her career and who, through the years that followed, became her closest friend – I would argue, more of a daughter, given the love between the two of them. It is a tender love story and friendship of two people that gave so much to each other – particularly through very hard times such as the publishing of the book written by Miss Davis’ daughter, and major illnesses.

It is filled with stories and beautiful and bittersweet memories of the aging actress at a time when older actresses were often discarded as compared to what opportunities avail them today. Kathryn was there to the end and fulfilled her promise to do Betty’s final makeup before she was laid to rest – detailed in a chapter that left me in absolute tears. I reflect upon the years I used to sit in darkened rooms watching Miss Davis perform in so many wonderful movies and the impact those had on me. I was actually fortunate enough to see Miss Davis in person, in Bakersfield of all places, as she gave a tour reflecting on her life and engaging with audiences around the country. She left us with so much that I am grateful that someone like Kathryn came along to give something to her that fame could not give and to write such a beautiful story in honor of her friend. I do hope you will take the opportunity to read this wonderful book.

In 1977, Doug Hartline wanted to be an actor but knew his talent wasn’t there so wisely put that behind him and left Bakersfield, California to start his upper division college work at the University of California Davis (UCD) working on a doctorate degree in Applied Mathematics with an emphasis on Physics. In 1982, God pressed it upon his heart to withdraw from pursuing that to spend more time with his family and to engage more fervently with his church. He therefore left his possible teaching career and part time teaching assistant position to begin a career as a University Administrator on his campus and held a variety of management positions there. Following many years at Davis, he spent the last ten years of his educational career as Director of Core Technologies at the University of California Santa Cruz. With his primary focus on information and educational technologies, Doug served on several statewide committees and was Chair of the Business Advisory Committee for the Corporation for Educational Initiatives in California (CENIC) that was responsible for providing high speed networking to most public and private universities, the community college system and K-12 schools throughout California. This labor of love resulted in him receiving the CENIC Founders Award just prior to his retirement in 2017. In all, he spent nearly forty years with the University of California. Although his career was focused on technology and higher education, Doug had many passions he wanted to pursue following retirement. He is an avid life long learner and has refocused his attentions from the sciences to literature, U.S. and World History, music, and the theater arts and now travels nationally and internationally to make what he learns come alive. To borrow from and paraphrase Robin Williams in Dead Poets Society, mathematics and physics was a noble pursuit and sustained Doug’s life, but it is poetry, beauty, romance and love that he finds are worth staying alive for. He is a ballroom dancer and is now learning to play the piano for the first time. As an amateur Hollywood historian, he strives to keep memories of a kinder and simpler age alive by sharing otherwise forgotten films with others and by meeting with stars from yesteryear. In an era of division and discord, he leverages all of these pursuits to show people how much beauty there is in the world if they will simply look for it. His wife of 41 years accompanies him in his travels and together they have two children and three grandchildren. They have had great joy in their marriage and have loved teaching Christian based marriage classes to couples looking to enhance their marriages. Together they realize that healthy marriages are the foundation for healthy families and a hopeful future.