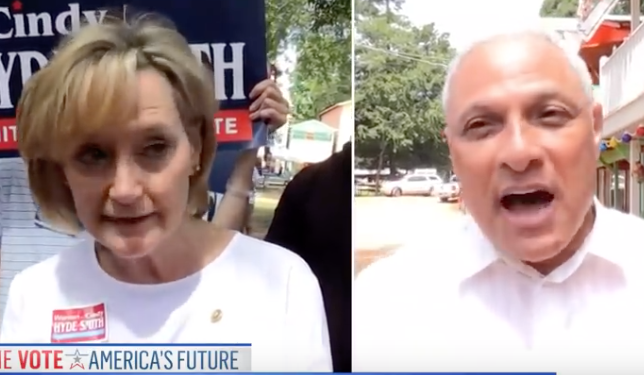 As I write this, the run-off election between Senator Cindy Hyde-Smith and Mike Espy in Mississippi is coming down to the wire as polls start closing in a few minutes. The race appeared to be a done deal before the polls open with various polls showing Hyde-Smith with a ten point lead going in.

But as things always seem to work out these days, Cindy made a statement that in her mind was innocent and intended only to express the degree of esteem in which she held a friend. Also, as with so many things these days, her opposition and most of the leftists in America became instantaneously offended, outraged, and disgusted by what they believed beyond doubt was an expression of deep-seated – yep, you guessed it, racism! But then, how many other things represent racism?

According to Politico’s Morning Education update:

On Nov. 11, a video appeared on social media showing Hyde-Smith saying that if she were invited by one of her supporters to a “public hanging,” she would be in “the front row.” Hyde-Smith refused to apologize outright, instead saying she used an ‘exaggerated expression of regard, and any attempt to turn this into a negative connotation is ridiculous.’”

To put it bluntly, I agree with her completely. The only mistake she made was responding to it at all.

As with so many other things that the left equates with racism, this one is ridiculous in its absurdity. A public hanging used to be a common occurrence when political correctness was an unknown expression and such an event was hardly confined to any particular race of offender. It was simply believed in the “good old days” that there was a power of deterrence to be had by ensuring that the entire community had the opportunity to see what happens to those who commit heinous crimes against persons and are convicted of same.

The left, however, always looks for opportunities to twist and distort their opponents’ words to apply a sinister and offensive meaning to them even though they know full well that the words had no such intent. Intent does not matter to the left. If such distortions result in the discrediting of an opponent, then all the better. There is no such thing as honesty, morality, or integrity. It is all about power and winning the war.

The key words in the Hyde-Smith quote – public hanging – was pounced on because it could, in their twisted approach to discourse, easily distorted to mean “lynching.” Now, had she used that term, I would be the first to admit the racism in her words because lynching is only used to describe the illegal practice of hanging blacks in the latter half of the 19th and first half of the 20th centuries.

The real intent of the comment was to suggest that if the person she held in high esteem were to invite her to a rather distasteful event such as a public hanging, she would still go and sit on the front row to please and honor the friend. Not one shred of the racism conjured by the left. Perhaps the expression was such a throw-back to a different time that it was misconstrued, but the degree to which it was blown out of proportion demonstrates that there was a conscious intent to destroy a political opponent out of desperation given the healthy lead she held at the time.

It is still likely that Senator Hyde-Smith will prevail in her run-off election in spite of the remark, but until there is a concerted effort to call out the left when they use such underhanded tactics in the future, the efforts to destroy through similar accusations of racism, sexism, xenophobia, homophobia, transphobia, or any other phobia the left tries to hang on conservatives at the drop of a hat these days, the attacks will continue.

One other point to make here is about the suggestion that because Hyde-Smith’s parents helped to open a private school in the 1970s as a means of avoiding segregated public schools automatically labels Hyde-Smith a racist because she sent her daughter to the same school a half century later is just about as ridiculous as the “public hanging” distortion. The reason the school was opened in the 1970s was to most people in the south a reasonable alternative and was well within their rights to do. Given the deterioration of the public schools across America and the leftist indoctrination that beats down our children to levels of mediocrity, there is little wonder that someone with the financial ability to send their kids to a private school (regardless of the school’s history) would do so rather than subject their kids to public schools. There is no evidence to establish that the Senator had any other motive for doing so other than to provide her child with a better education that was available publicly.

What needs to happen is to call these people out when they do it as I have done here. If it were to be done consistently by every person with a voice, the left might just realize that it is not a sure-fire way to stop their opposition. This will be necessary and essential to conservative survival until an honest and objective news media is restored to American life. Right now, our challenges must nearly be screamed just to be heard at all given the megaphone provided by the left media to amplify the distortions of the Democrats and their socialist fan base.

They will stop at nothing…therefore, we must stop at nothing to defend our candidates and our principles aggressively with Truth and demand evidence when any accusation is made. Remember what they tried to do with Brett Kavanaugh without evidence?

The Left's Latest Charge: A Charlie Brown Thanksgiving is Racist

The Chief Justice Has It Wrong…Again!