For decades, New Zealand journalist Trevor Loudon has been uncovering ways in which communism and socialism have infiltrated American politics. The Democrat Socialists of America, hidden in plain sight by simply calling themselves Democrats, have been slowly and steadily taking over the party. And now, they are working hard to take over one of the nation’s strongest and reddest states: Texas.

What follows is part of Trevor Loudon’s latest report on the infiltration of Texas, and you can read the rest on his blog at TrevorLoudon.com.

Steve Phillips and the Texas Organizing Project understand that turning Texas blue is a mammoth undertaking. But the prize is huge – the destruction of the GOP as a national force and the imposition of permanent Democrat/socialist rule. It won’t happen this election cycle, or the next, but unless these forces are exposed and countered, Texas will eventually go Democrat and take the whole country with it.

The Democrats have a lock on California’s 55 votes. The Republicans rely on Texas’ 38 votes. If either party can ever win both states in the same cycle, that will be the end of the traditional two-party system. Given the Democrats’ heavy top to bottom Marxist infiltration, flipping Texas to their camp would usher in a permanent one-party socialist state.

San Francisco lawyer and stealth socialist Steve Phillips is aiming to do just that. Working with leftist mega donors from the secretive Democracy Alliance and his own organizations, Steve Phillips has set up mass voter registration programs in several states to sign up millions of new minority voters. Phillips is well on the way to flipping Georgia, Arizona, Florida and North Carolina. But Texas will be the biggest prize of all. Not this election cycle, not the next election cycle, but within a decade at the most, Steve Phillips wants to turn Texas blue.

This is how he plans to do it.

One of Phillips’ main Texas change-agents is the Texas Organizing Project (TOP).

The TOP estimates that Republicans enjoy 850,000 more voters than progressives in Texas. They hope to close that gap by 2022, and catapult like-minded candidates to statewide office and create a coalition of informed voters around key issues. They have targeted six counties to mine for votes, including Dallas County.

Houston based TOP is essentially the reincarnation of Texas ACORN, the much discredited voter registration organization that collapsed in 2010. Both founding Executive Director Ginny Goldman and current leader Michelle Tremillo were ACORN leaders.

Ginny Goldman came to Houston in 2003 by way of Chicago, where she’d been working as a community organizer since she was 21.

Progress, she thought, required a Texas solution built for the vagaries of a big city that was diverse, cosmopolitan, and part of the heavily Republican Deep South. Many national campaigns run by unions, other big left-leaning non-profits or Democratic Party affiliates didn’t even include Houston.

In 2016, TOP had a $3 million budget and 38 full-time staff members based in offices in Houston, Dallas and San Antonio. In 2016, for this fall’s election, TOP added dozens of part-time staffers to try to get 380,000 voters to the polls in Harris, Dallas and Bexar counties.

TOP is joined at the hip with Steve Phillips.

Texas Organizing Project Education Fund Board Director Ashindi Maxton works for the Democracy Alliance and serves on the advisory board of the Movement Voter Project, alongside Phillips’ wife Susan Sandler and his close colleagues Marvin Randolph, Andy Wong and good friend, Van Jones.

Former TOP Political Director Joaquin Guerra serves on the board of Steve Phillips’ PowerPAC+. So does current Director of Electoral Strategy Crystal Zermeno. In addition, Zermeno worked with another Phillips entity PowerPAC.org as their director of operations, conducting “a statewide mapping of California to assess priority geographies for investment in electoral work with the expressed goal of improving participation of communities of color in the electoral process.” She also serves on the advisory board of Phillips’ Sandler Phillips Center.

Current TOP Executive Director Michelle Tremillo is a 2015 alumni of the Freedom Road Socialist Organization-linked Rockwood Leadership Institute. Steve Phillips, Michelle Tremillo and Crystal Zermeno are also all Stanford University Alumni. Phillips and Zermeno were both active in radical politics at Stanford – Phillips in the ’80s with the Black Student Union and Zermeno in the ’90s with MEChA.

Imitating Jesse Jackson’s Rainbow Coalition, the Maoist leaning League of Revolutionary Struggle organised the Black Student Union, MEChA and the Asian Student Union into a Peoples Platform to contest student elections. The Peoples Platform lasted well into the 1990s, several years after the 1990 morphing of the League of Revolutionary Struggle into the Unity Organizing Committee, in which Phillips was a leading activist.

Interestingly, Texas Organizing Project board members include the famous San Antonio activist Rosie Castro, a one time associate of the Communist Party USA and a leader of the far-left Chicano nationalist Raza Unida Party – part of which eventually morphed into the Freedom Road Socialist Organization. 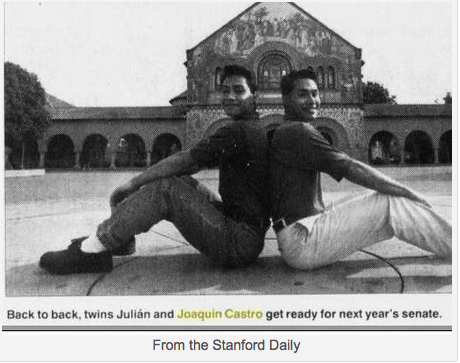 Rosie Castro is the mother of the famous Castro twins. Julian – former mayor of San Antonio and Obama’s HUD head and Joaquin – now a congressman from Bexar county. Both men are regarded as future Democratic Party “top of the ticket” material.

In 1995, the Castro brothers were elected to the Stanford Council of Presidents on the radical Peoples Platform ticket. Both got exactly 811 votes.

Both had been members of the Stanford Democrats and Derechos, a leftist Chicano/Latino student group focusing on law.

He was an early, generous supporter of the Texas Organizing Project, and helped catapult the organization’s work forward when it came to community organizing and political action, particularly in disenfranchised communities of color.

Three million registered African-American and Latino voters stayed home in Texas in 2010, plus 2 million more were unregistered, leading to crushing Republican victories that year. TOP launched an ambitious project to discover, as Crystal Zermeno put it, “who was not voting, and why.”

TOP embarked on a series of intensive focus groups, which were largely financed by the Mostyns.

Year after year, the Mostyns had loyally stumped up hefty donations to middle-of-the-road Democrats who doggedly pursued existing voters while ignoring the multitude who sat out elections all or most of the time. When TOP asked these reluctant voters about their abstention, the answer was almost always the same: “When I have voted for Democrats in the past, nothing has changed, so it’s not worth my time.”

What was the solution?

Ever since the era of Ann Richards, Democrats had been focusing their efforts (without success) on winning back white swing voters outside the big cities. But Crystal Zermeno realized that there was no reason “to beat our heads against the wall for that group of people anymore, not when we’ve got a million-voter gap and as many as four million non-voting people of color in the big cities, who are likely Democrats.” By relentlessly appealing to that shadow electorate, and gradually turning them into habitual voters, TOP could whittle down and eliminate the Republican advantage in elections for statewide offices such as governor and lieutenant governor, not to mention the state’s thirty-eight votes in the presidential Electoral College. In other words, since the existing Texas electorate was never going to generate a satisfactory result, TOP was going to have to grow a new one

“Non-partisan” TOP basically exists to mobilize infrequent or non-voting black and Latino voters to elect far-left Democrats to public office. So far they’ve helped elect Houston mayor Sylvester Turner, several state level politicians and dozens of county commissioners, city councilors and school board members across eastern and central Texas. And they’re working with the hard-left to do it.

The Houston Club of the Communist Party USA claims …”we have a very close working relationship with  Working America and with the Texas Organizing Project.” 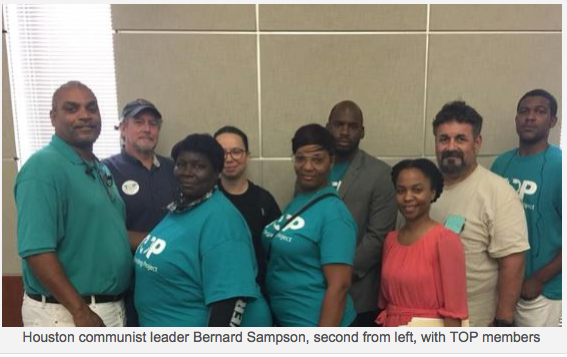 Houston Communist Party member Rev. James Caldwell is also a leading TOP member and the party claims to have recruited at least one TOP organizer.

Certainly the two organizations back the same candidates. In 2013, the Houston communists worked in Sylvia Garcia’s successful campaign for state representative. Garcia is now running for Congress in a safe Democratic seat, endorsed by TOP. 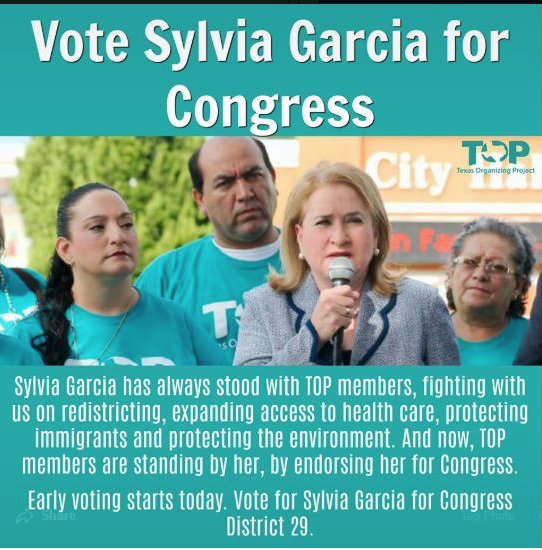 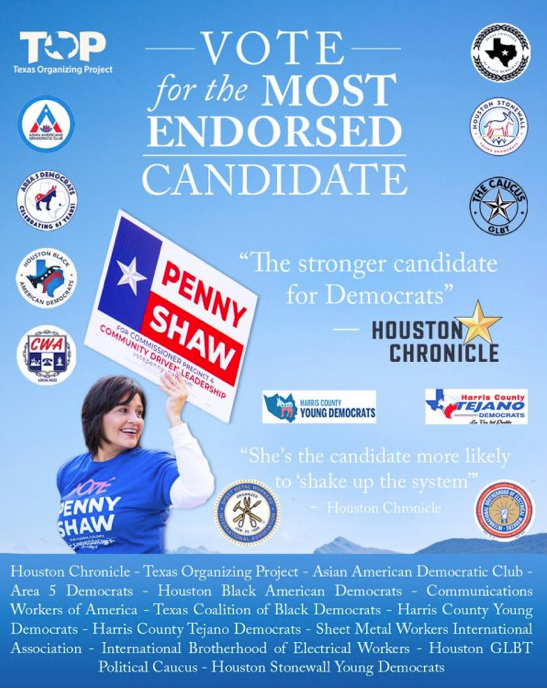 While standing as a Democrat, Shaw is an undercover member of the Houston Communist Party.

In addition, the club is working in Penny Shaw’s election campaign. Penny is running for a seat on the Harris County Commissioners Court Precinct 4. This precinct has over a million people in it and if elected she would help decide on the distribution to working-class constituents of a budget that’s well over a billion dollars a year.

In Dallas, TOP is supporting Democrat Victoria Neave to return her to the Texas State Legislature. TOP helped her last cycle too, when she beat her Republican opponent by 836 votes.

Sharia and the United States: Why the Two Will Never Be Compatible