Let me preface this essay with the admission that I have no way to comprehend the anguish and pain that anyone experiences from the loss of a child to a violent event such as a school shooting. I can also understand that there is a need following such an experience to find some rational purpose for the event and to involve oneself in something that brings meaning to the life of that child, now lost.

In the case of Fred Guttenberg, father of Jaime, who was killed at the Douglas High School shooting in Parkland, FL, he has taken it upon himself to spend his time since then and leading up to the mid-term elections crusading against any candidate who takes campaign contributions form the National Rifle Association (NRA). The obvious point to his travels across the country to speak in support of such candidates is to encourage people to vote for those who support stricter restrictions and limitations to the 2nd Amendment right to keep and bear arms.

Guttenberg is quoted by Morning Education:

“Since my daughter was killed, sleep doesn’t really happen easily, so I’m constantly researching and deciding where I want to go,” he said. “I want to support candidates who aren’t afraid to strongly talk about this issue in honest terms.”

If, in fact, Mr. Guttenberg is sincere in his desire to “…talk about this issue in honest terms,” I believe he needs to seek some more objective resources during his constant research efforts. Apparently, he is attempting to learn all he can about the subject that affirms his pre-existing notion of what the facts are without a thought to what the fact really are.

Perhaps he needs to talk a dive into the crime statistics provided by the Federal Bureau of Investigation rather than Every Town Against Gun Violence. Perhaps he needs to examine the fact with regard to how and where mass shootings take place and how those facts match up with the consistent fact that such shootings take place in spaces where firearms are already prohibited. This would tend to point a rational thinker to consider that if a shooter enters a “Gun-Free Zone” he/she is already breaking a firearm-related law that would likely produce a future prohibition against possessing a firearm. Such a shooter is hardly going to give much thought to what other laws they are breaking during the planning and execution of such an act of carnage as entering a school and indiscriminately killing students and then committing suicide. The entire act of planning and completing a shooting within a school, church, or other public place is completely irrational and without an sort of logical basis to begin with. 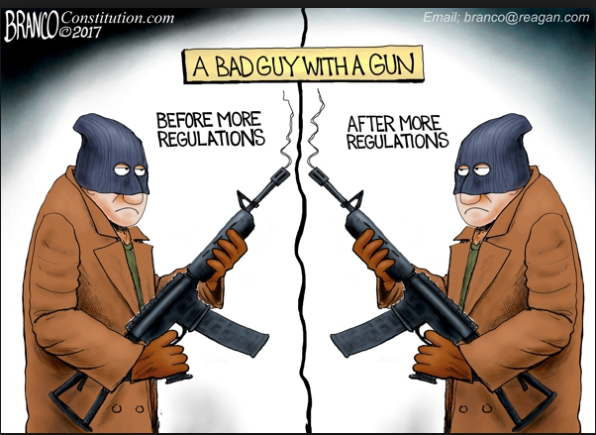 To suggest that the enactment of more laws that, in reality, affect only rational people who generally obey the laws that are on the books already, are going to eliminate mass shootings is, at best, naïve, and at worst, disingenuous. It is tilting at windmills to suggest that any meaningful good will come form them in that regard. All that new gun restrictions can possibly have on anything is a decrease in the ability of law-abiding citizens to protect themselves and their loved ones from those that are bent on doing harm to them or taking what belongs to the victims.

Speaking of the hectic pace he has maintained since starting on his campaign to support pro-gun-control candidates, Guttenberg is again quoted by Morning Education:

“I have less hair, I’ve put on weight, I have a wife and a son who need me,” he said. “I need to make changes. But I’ve found this lane through the election that seems to be working for me. It feels like the right thing to do.”

It feels like the right thing to do. Therein lies the error that so many gun-control advocates allow to fog their vision and thinking. Feelings are not what should be driving the conversation. The emotions surrounding such events always bring forth an increase in the “feeling” that gun-control laws are the answer. However, fortunately, those who remain rational and objective understand that feelings cloud judgment. Lawmakers are not doing their job properly – particularly at the federal level – when they allow emotions and popular whims to impact their decision-making process.

There must be fact to support the action. Failure to follow this approach has historically been much of the reason why we have a federal deficit of $20,000,000,000,00. and counting, the federal government is involved in areas of our lives into which they have no constitutional basis to be. Much of what lawmakers do is seek out (or create) problems simply as a means of “doing something.” In the case of gun-control issues, the driving force is an emotional desire to “do something” simply out of frustration that periodically another mentally unbalanced individual decides to take out their anger or delusions on innocent people with deadly results.

Re-read that last sentence and you will likely find the key to some solutions. Mental illness has had a checkered past. In many cases, those suffering from mental illness have found themselves abused in facilities that failed them as patients and as human beings. As a result, society began closing such facilities and failed to provide an alternative. Instead, outpatient treatment efforts were instituted while the patient remained free – walking among us. No restrictions. No limits on access to firearms simply because the laws currently require judicial orders before someone’s name can be added to the “no-buy” list for firearms. While I fully support the idea of due process in making decisions that deny citizens basic human rights and constitutionally guaranteed rights, I believe there are alternatives that could go further to resolving this problem.

The most significant change in existing practice that could make a difference is a modification of the 100% outpatient approach. Some, if not all, states have some form of legal basis for requiring a short-term (usually 72 hours) hold on someone who presents evidence that they are a danger to themselves or others. When such concerns come to the attention of mental health practitioners, they should be making their judgments based on what their patients tell them, what medications they are on, and whether they are consistently taking those medications as directed, before making a decision as to what is best for the patient and the community. Specifically, a judgment must be made about the need for a patient to be supervised and continually monitored and medicated while receiving treatment. This approach is seldom used today. Most practitioners are reluctant to take this crucial step to recommend commitment, often for fear of “stigmatizing” the patient.

Until the medical and psychological practitioners awaken to the fact that not all their patients are able to operate freely in their communities, and they take direct action to protect their communities and their patients from danger, there will never be any way to prevent another school shooting from being months or weeks away from happening. It won’t prevent all of them, but it will help reduce the frequency.

I would sincerely hope that Mr. Guttenberg will reconsider what “feels good” as opposed to what “does good” in his efforts to cope with his loss. By approaching the problem by “doing good” through attempts to bring reform to our ways of dealing with the mentally disturbed, he can take solace in the fact that he could, perhaps, prevent other families from suffering the heartache of loss that he did.

Many failures within our systems caused the disaster that was the Douglas High School shooting. The one that seems to be universal is not the tool used by the attackers but their nearly universal suffering from mental illnesses of some sort. Focusing on the root of the problem instead of the tool would be far more productive in the end. I pray from my heart that there is never another school shooting, but action is also necessary when applied to the causes that underly the acts.

Daniel Greenfield: The Plot Against the Supreme Court