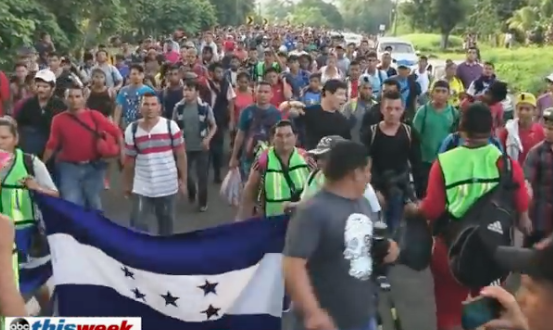 As I write this, the caravan of alien travelers attempting to walk from Honduras to the southern border of the United States has swelled to around 4500 and continues to grow as it moves into Mexico. The videos from the bridge between Mexico and Guatemala demonstrate just the sort of futility that is experienced when such a large group of determined individuals arrives at a national border-crossing and there is no physical barrier of any consequence preventing the intruders from entering.

The iron gates at the Mexico end of the bridge were breached almost immediately as Mexico attempted to identify a few hundred that tried to claim legitimate asylum. The areas on either side of the bridge were effectively unprotected by anything other than the body of water flowing under the bridge. Many chose to raft, ferry, swim, wade or otherwise cross the river and walk freely into Mexico without much further hindrance despite the presence of around 500 fully riot-gear-equipped Mexican federal police.

The caravan has begun to reform on the Mexican side of that border with the intent to continue its northern journey to the United States. Allegedly, the United Nations and Mexico have agreed to provide facilities to accommodate the asylum seekers who largely claim that they are fleeing Honduras because of its poor economy and gang violence. While the gang violence might be a consideration in asylum cases, international norms do not provide for refugee status for solely economic reasons.

So, what happens when the caravan reaches the U.S. border? There is nothing that has been observed so far that would indicate that the Mexican government or the United Nations will do anything further to bring the caravan to a halt.

There are few options under the rules that currently exist under U.S. Immigration Laws. When a person presents themselves at the border and claims refugee status (questionable in these circumstances) they must be received, detained for processing and either released into the country with a summons to appear at a future date for a hearing on their claim of refugee status which has become a complete joke given that about three percent show up if history is any indication. Those with minor children will, again, be faced with separation while ICE determines if the adults accompanying the children are actually parents or relatives or whether they are actually bringing the children to America for the purposes of trafficking them as sex toys or slaves. This will likely result in more leftist judges demanding that the adults and children be re-united within a short time frame and released rather than being detained together or apart until proper vetting can be completed. Such was the case with the last invasion of several hundred in an earlier caravan.

Is there anything different that could be done this time? President Trump suggests that he will bring in regular Army troops to block the caravan from entering U.S. territory. Is that feasible? Somehow, I think someone, somewhere will find a federal judge that will find such an action offensive and issue a restraining order against such a deployment. But even if that does not happen and the troops are deployed at the border, what can the President expect them to do? How many would it take? The troops cannot occupy space on the Mexican side of the border and if they remain on the U.S. side the aliens will have reached the border before they could be stopped. The only alternative at that point is to either admit them or shoot them. You and I both know that the latter would be exactly what the Demoleft Party would love to have happen a week or so before the mid-term elections. You can bet the cameras would be rolling throughout the crowd if violence erupts.

There is only one thin wisp of hope that lingers…that a miracle happens that keeps the caravan from reaching its destination, because if it gets here, we are right back where we were several months ago and the left wins the gambit.

One parting question…videos have been posted of white males passing out what appears to be money to refugees lined up to join the caravan. Where did they come from? Who’s providing the money? Oh, and how does it happen that this particular effort is being made just two weeks or so ahead of those elections? Coincidence? I am firmly convinced that there are no coincidences…only efforts to overload our country with dependency and poverty that will eventually destroy our country. I fear that our President, though, is really between a rock and a hard place. If the caravan does not stop…we are in trouble.

Does Amazon Support an Org that Supports Female Genital Mutilation?