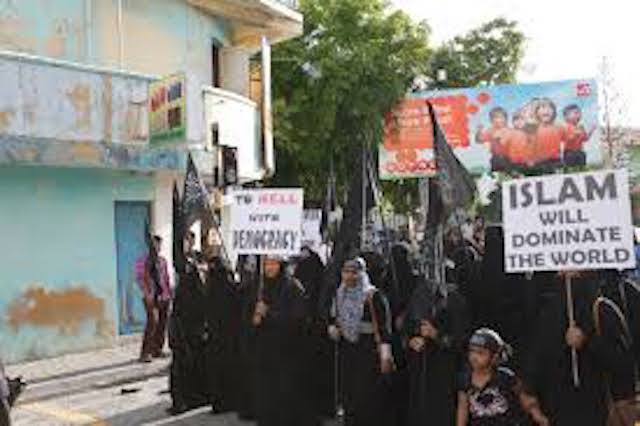 Newt Gingrich set off the leftist alarm bells Thursday when he suggested all believers in “Sharia Law” should be deported from the United States.

An article in reliably left-leaning The Atlantic (here) took serious issue with the argument suggesting that it would never meet constitutional muster even if President Trump might have the authority under Immigration Law to deny entry to Muslims or any other group he might choose to exclude. After all, some believers in sharia are already granted citizenship or permanent residence which means that they would be protected under the First Amendment which allegedly guarantees freedom of religion.

But let’s take a closer look at what is involved here. Sharia is not in any tradition sense a religion. Yes, I said, and believe, that sharia is a political system that controls the behavior and habits of all who fall within its clutches. It is a form of fascism that is every bit as destructive and barbaric as Hitler’s Third Reich.

Sharia invades every aspect of life under Islamic rule. When and who one marries, how many witnesses are needed to prove rape (virtually impossible to prove under sharia rules), punishment for homosexuality – death, punishment for disobeying one’s husband – beatings, rape, death, how one conducts their business, which hand one wipes themselves with – yes, that, too. It is all encompassing. As oppressive as it seems that all the various laws we have in America, they do not invade one’s personal life even close to the extent that sharia does for Islamists.

Calling sharia a religion is so utterly deceptive that it is almost comical to hear it identified that way. Islam might be loosely called a religion if it were not for the fact that one of its requirements is that its adherents follow sharia in every aspect of their lives. In reality, there is no freedom under sharia…only oppression.

But the singular aspect of Islam and sharia is its complete incompatibility with the United States Constitution. First and foremost, sharia does not permit anyone under its control any sort of freedom of religion. But most egregious of its incompatibilities is that if it is permitted to spread within America, it will eventually require its adherents to attack the rest of the citizens of our country in order to force submission to Islamic control and the oppression of sharia. It is part of the doctrine. All must submit to sharia or die. It is that simple.

So, when one truly examines this issue, Gingrich has the right idea because – as people in Dearborn are rapidly coming to grips with – the greater the number of followers of Islam are admitted to the country, the worse the country will be, and the more difficult life will be for the rest of our citizens. Because of the lax enforcement of our immigration laws and the sympathies of the previous administration for Islam and its followers, we have already created a lot of enclaves within our country that seriously create problems for those nearby.

It comes down to one simple situation. If sharia is permitted to be practiced in America as it is currently practiced in Muslim countries, it will eventually invade our government and its political subdivisions as it is already doing in Dearborn, MI, among other places. When that is permitted to happen, it is only a matter of time before efforts will be made to suspend the protections of our constitution in favor of forced compliance with sharia.

For those who say it could never happen, I offer the following:

Did anyone ever believe that the Supreme Court would ever make the killing of unborn children legal by edict that over-rode the laws of numerous states?

Did anyone ever believe that the Supreme Court would ever make sodomy legal?

Did anyone ever believe that the Supreme Court would ever make same sex marriage legal?

Who ever thought that judges across America would ever enjoin the federal government from enforcing immigration laws on the states and cities that currently claim “sanctuary status” to avoid aiding in the enforcement of those laws?

One of the very limited number of legitimate obligations of the federal government is to protect states from invasion through the enforcement of immigration laws and the President has been delegated authority to make decisions as to how many and under what circumstances non-citizens can enter our country.

No matter what you think about any of the above issues, one thing is very clear. It is only in the last 100 years or less that many of the institutions that this country was founded on have been severely damaged by judicial edict. Given the existence of a published document (English version begins at page 16 of linked document). stating that the intention of the Islamic nations is the conquest of the entire world to enforce Islamic law (sharia) on everyone, can we really delude ourselves that allowing immigration to this country by this group is going to benefit America? Can we really believe with any certainty that those already here have not already begun to create enclaves through which the ultimate conquest of America can be initiated? To allow this to continue is not in the best interests of our constitution or our country. We either face reality now when it is manageable rather than later when it is not. Gingrich is brave…and correct.

Daniel Greenfield: These Murders Were Brought to You By the Two State Solution

Trevor Loudon: How a Stealth Socialist/Lawyer is Working to Turn Texas BLUE