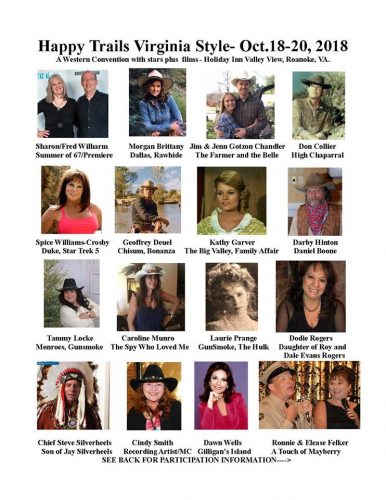 In today’s world of reality shows and hospital dramas, it’s hard to imagine that in the middle of last century (and continuing for about 20 years) the dominant genre in TV and movies was the Western. It produced several iconic Hollywood legends such as John Wayne and Roy Rogers. Two of the longest running shows in television history were Gunsmoke and Bonanza. It was a time when the good guys like Matt Dillon or Nick Barkley fought against the outlaws and won. The Western genre also generated one of the first female patriarchs: Victoria Barkley in “The Big Valley” (wonderfully portrayed by Barbara Stanwyck). Even Star Trek was described by it’s creator, Gene Roddenberry, as a “Wagon Train to the stars” (they did an episode where Kirk and crew “experienced” the gunfight at OK corral).

So if you love Cowboys, legends, and their stories, you’ll love the upcoming event Happy Trails Virginia Style Oct 18-20 at the airport Holiday Inn in Roanoke, Va. This three day event, organized by Politichicks contributor Dr. Fred Eichelman, will showcase several classic stars from the Western years and some of today’s stars who have re-ignited the genre:

Jim Chandler and Jenn Gotzen Chandler (The Farmer and the Belle)

Caroline Munro (The Spy Who Loved Me)

Sharon Wilharm and Fred Wilharm (Summer of 67, which will be premiered at the event).

Author and humorist Lisa Brown will be attending and signing copies of her book “If cheese made you thin I’d be invisible by now”.

Founder and CEO of Politichicks, Ann-Marie Murrell will be conducting interviews with the stars for VictoryNOW Films and TV.

The MC for the event will be recording artist Cindy Smith.

Extra security will be provided by Fearless Fife and Thelma Lou (Ronnie and Elise Felker). They will nip any problems in the bud!

A special room will be set up for the stars to interact with the public as well as several vendors who will have a myriad of memorabilia for purchase. Also during the event, each star will participate in a panel where they will discuss their careers and take questions from the audience.

The event runs from 8 am – 5 pm each day. It will conclude with a banquet Saturday evening. There will be an auction at the banquet called “Give cancer the boot”. All proceeds will go the to the American Cancer Society.

So put on your cowboy boots and hat and ride on over to Happy Trails Virginia Style.

Daniel Greenfield: The War on Columbus is a War on America

The Left's Torture of a Black American