A full hundred years ago in 1918, the United States of America fought the single bloodiest battle in its history. 20,000 American soldiers died, tens of thousands more were wounded, and more ammunition was fired than in the entirety of the US Civil War. This was the Meuse-Argonne Offensive in 1918, a conflict faced in the infamous hellish trenches of World War I. Veterans who returned from these battlefields told stories of bitter cold, rampant disease, and hanging water canteens and other combat gear on the stiff, dead arms of fallen brothers. Many would die all at once in such vast numbers that they can only be honored at graves with uncertain occupants, their identities “known but to God”.

It’s worth noting that, for all its horror, the Meuse-Argonne Offensive ended in a great victory for America, one which helped bring World War I to a close. We can only take solace in the knowledge that this fact must surely bring comfort to the slumber of those 20,000 dead.

There have been other terrible wars since then, most notably World War II and Vietnam, each of which turned out it’s own heroes both living and 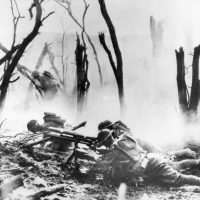 passed. But it’s safe to say that most of the younger generation of today knows nothing of this kind of sacrifice and strife. They don’t know what it is to fight a war as a nation, a war that, if lost, could bring death and devastation to families back home. What they do know are lives of comfort, opportunity, and above all, freedom – all of which was won and preserved for them by warriors they will never meet. They reap a harvest they did not sow, and because of this, they all too commonly begin to feel entitled to it, paying no price for it and perhaps believing that no price was paid at all.

PROTESTS TODAY, I think it’s important for teachers and parents to bring their children to these beautiful sites, let them walk through the rose of crosses, let them look at the walls of remembrance, let them go into the cemetery chapels and let them learn the history of what these men did so long ago.

Carl Marx most quoted statement: “History repeats itself, first as tragedy, then as farce.”

That, I think, is how modern American politics has come to where it is today. In 1918, soldiers fought in the trenches of Europe so we would never have to fight at home; today, young people don’t even want to defend our border. They don’t want to stand up for American economic interests against foreign nations who are looking out only for themselves and to harm Americans. And they decry as racist any suggestion that we are under attack now, as well, and that we have a duty to defend ourselves, lest the efforts of those who fought in the Meuse-Argonne Offensive ultimately be in vain.

In the Book of Proverbs, the Bible admonishes us: “Though it cost all you have, get understanding. Cherish her, and she will exalt you; embrace her, and she will honor you.” This is wisdom. Our nation has earned understanding in its past, fought for by people for whom it did literally cost all they had: Their lives. But because they did this service for us long ago, we’ve forgotten it today. It’s there, for all of us, because the price has been paid and it belongs to us, but we’ve forgotten. We need to remember.

We need to understand that nothing in life is free. That there are those who will fight tooth and nail to take what we have, or simply to destroy us for its own sake. That evil really does exist, and we must fight it. This is the understanding that will exalt us if we cherish her, and honor us if we embrace her. The world owes us nothing, but we are made of some very strong stuff, and we have what it takes to earn our keep. If we refuse to forget that, then the brave souls, who gave everything for us a hundred years ago, and so many others like them, will have passed on their precious gift of understanding to us.

Still So Many Roads: Eight Essential Albums of Otis Rush

Does Amazon Support an Org that Supports Female Genital Mutilation?