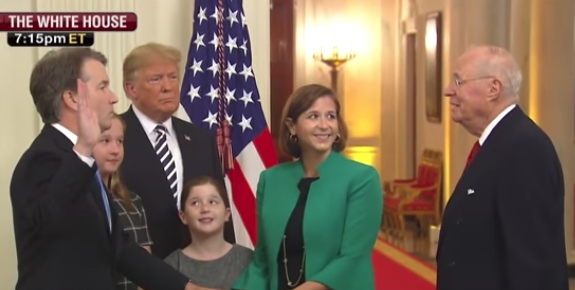 After a long and despicable battle brought on by the left, Brett Kavanaugh was confirmed and sworn in as a Supreme Court Justice. As they used to say, it’s all over but the shouting. Of course we saw this in the Senate chambers over the last few days from leftist protestors. Someone should warn the sky that there may be a lot of people shouting at it soon.

As I watched this drama unfold, there were several takeaways for me:

Brett Kavanaugh has been sworn in as a Supreme Court Justice. Barring any health issues he will likely serve on the court for a quarter century. But the Kavanaugh Victory is just one battle in a larger political war. The left is not going to let this go. If they regain the House they will move to impeach Kavanaugh (and Trump). That’s why it is imperative on those of us who respect the rule of law to get out and vote next month and continue what we started in 2016. The left must not be allowed to have power in any capacity. Their behavior during the Kavanaugh nomination demonstrates just how irrational, hateful and dangerous they are.